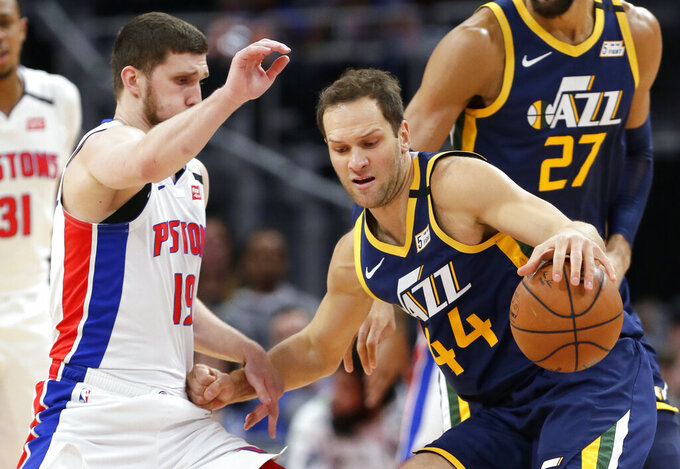 FILE - In this March 7, 2020, file photo, Utah Jazz forward Bojan Bogdanovic (44) drives against Detroit Pistons guard Sviatoslav Mykhailiuk (19) during the first half of an NBA basketball game in Detroit. The Utah Jazz announced that forward Bogdanovic underwent surgery Tuesday, May 19, 2020, to repair a ruptured ligament in his right wrist. (AP Photo/Duane Burleson, File)

The procedure was performed Tuesday by orthopedic surgeon Dr. Michelle Carlson at Hospital for Special Surgery in New York City. There's no timetable for Bogdanovic's return. The team said in a release that he will begin rehabilitation “at the appropriate time.” The NBA season remains on hold due to the coronavirus pandemic.

Bogdanovic was averaging 20.2 points, 4.1 rebounds and 2.1 assists in his first season with the Jazz. He also was playing a career-best 33.1 minutes per game.

The 31-year-old Bogdanovic signed a four-year, $73 million contract with Utah last summer. The Jazz became his fourth team, following two years with Indiana along with stints in Brooklyn and Washington.