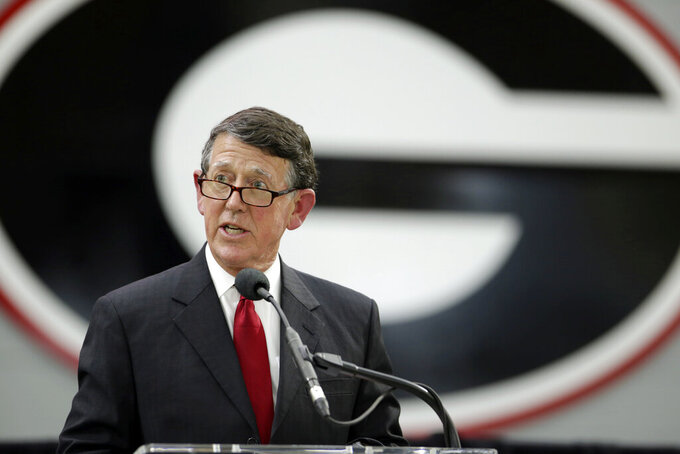 Josh Brooks is getting a shot as Georgia’s interim athletic director.

He hopes it will become a permanent job.

The 40-year-old Brooks is set to take over one of the nation's most successful athletic programs on Jan. 1 after the retirement of Greg McGarity, who guided the department for the past decade.

Even though Georgia could seek out a more experienced candidate, Brooks made it clear that he hopes to remove the interim from his title.

“I have always been young in my career as I have advanced,” he said, “I am young, but I’ve had 20 plus years of experience in college athletics. I have seen athletics at every level -- small schools, big schools. I have worked as a student-assistant, grad assistant coach. I have worked in football operations -- that gives me the coaching side of it. I have worked in administration 10-plus years.”

“I have been able to serve as an AD, and know a small school like Millsaps, some people may say, ‘Well, that’s not really relevant.’” Brooks said. “In all reality, it’s a lot more relevant than you think because you are dealing with student-athletes, parents, coaches, staff. A lot of the issues are the same. I have had a wide range of experience.”

Brooks took on an increasing amount of responsibility as McGarity’s chief deputy, overseeing facility expansion and construction projects including the $65 million improvement to the west end of Sanford Stadium. He also headed up game-day operations for the Bulldogs’ powerhouse football program.

“Greg has really nurtured me and given me some peeks behind the road to really see what it is like in his shoes,” Brooks said. “I feel ready and I feel confident for this responsibility.”

Brooks is a Louisiana native who graduated from LSU with a degree in kinesiology and completed his master’s degree in sports management at Georgia.

During his first stint in Georgia’s athletic department, he served as director of football operations and associate athletic director for internal operations.

In those roles, Brooks was in charge of scheduling future football games as well as overseeing bowl game operations. In addition, he planned a 2013 Sanford Stadium concert by country star Jason Aldean.

“What I have done in my career has built up more than just what you would look at in a couple months,” Brooks said. “I have always tried to show that day in and day out. If this is an audition, then so be it, but I come to work the same way every day. I will treat today or January 1 no different than any day -- show up, treat people the right way, represent the university.”

Brooks said he’s planning no big changes during his interim tenure, wanting to stay on the path that McGarity set while helping Georgia navigate the financial impact of the coronavirus pandemic.

“The strength of our department is continuity, and now is definitely not the time to be looking at what we can change," Brooks said "We have enough challenges in front of us navigating these times that we are facing right now in light of the pandemic and everything else going on. It’s really about keeping the ship on course.”

“We have a great senior team,” Brooks said. “It’s really about keeping that continuity and keeping everything moving in the same direction. I would hope to keep providing the steady leadership Greg has and keep us on course.”