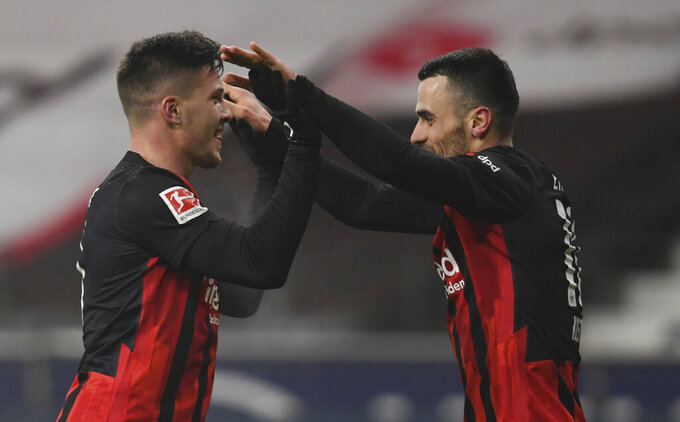 DÜSSELDORF, Germany (AP) — Underwhelming at Real Madrid, Luka Jovic has a second chance to prove himself at the German club where he made his name.

The Serbian striker came off the bench in his first game back on loan in the Bundesliga on Sunday and scored two goals, lifting Eintracht Frankfurt to a 3-1 victory over Schalke.

It was an explosive half-hour cameo as Jovic sent a rising shot into the roof of the net off, then added another in stoppage time after beating a defender with his footwork. That was as many goals as he scored in 19 months with Madrid.

“Couldn’t have imagined a better comeback,” Jovic wrote on Instagram. “I hope this is only the beginning and that the best is yet to come.”

Frankfurt teammate Djibril Sow recounted a pre-game conversation where Jovic said he would score once if given 15 minutes of game time, twice if he had a half hour.

“He kept his word,” Sow said in comments reported by the Frankfurter Rundschau newspaper. “And it isn't something you can take for granted to deliver like that in your first game. A lot of class.”

If he can keep it up, that kind of scoring form could bring Jovic back to relevance in Madrid after spending 2020 in the spotlight more for his injuries and conduct amid the coronavirus pandemic than for his increasingly rare appearances.

Jovic's record of two goals in 32 games for Madrid is far below the form — 27 goals in 48 games for Frankfurt in 2018-19 — which earned him a transfer to Spain for a reported 60 million euros ($72 million). That reflects Jovic's limited game time in Madrid, with only 11 starts, and his own less-than-stellar performances.

Jovic looked visibly frustrated in his last start for Madrid in one of the most ignominious games in the club's recent history, the 3-2 home loss in October against a Shakhtar Donetsk team so badly depleted by coronavirus cases that it had to draw on youth players.

The pandemic threw Jovic's career into turmoil. In March, he traveled home to Serbia when the Spanish league was suspended and was pictured at a party. Jovic faced a possible six-month prison sentence for breaking quarantine but the case was resolved when he agreed to pay 30,000 euros ($36,000).

When the Spanish league resumed, Jovic was sidelined with a foot injury he picked up while training at home. He missed yet more games after testing positive for the coronavirus in November.

Madrid coach Zinedine Zidane gave few opportunities to Jovic but in October said the striker was an important part of his squad. Zidane said he was the one who asked Madrid to sign Jovic and dismissed reports of a rift between them.

If Jovic can keep scoring for Frankfurt, it could also be what the club needs to fulfill its potential. Frankfurt has excelled in knockout competitions in recent years with a German Cup title and a run to the Europa League semifinals, but hasn't been able to get above mid-table in the Bundesliga. After Sunday's win, the team is three points off the Champions League places.

“For Luka, it's extremely important that he comes back here, where he had his best time and where he feels good," Frankfurt coach Adi Hütter said. “Scoring two goals like that shows his class.”