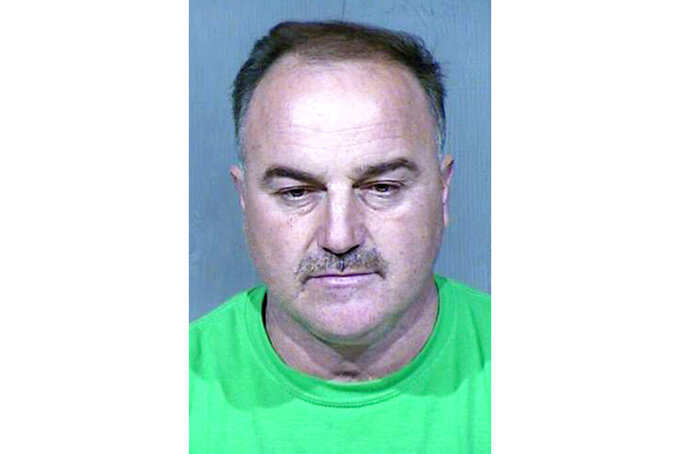 FILE - This undated booking file photo provided by the Maricopa County Sheriff's Office shows 42-year-old Ali Yousif Ahmed Al-Nouri, who was arrested earlier this year in Arizona as part of an extradition request made by the Iraqi government. Ahmed, a native of Iraq who became a U.S. citizen in 2015, is charged with murder in the 2006 shooting deaths of two police officers in Fallujah. A judge on Sept. 21, 2020, ordered Ahmed to be jailed until his extradition hearing has concluded. Ahmed has denied involvement in the killings. (Maricopa County Sheriff's Office via AP, ile) 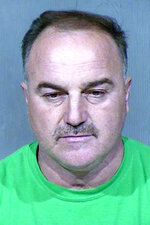 PHOENIX (AP) — A judge in Arizona has ruled that an Iraqi immigrant arrested on charges of participating in the 2006 killings of two police officers in Iraq will remain jailed until his extradition case concludes.

U.S. Magistrate Judge Michael Morrissey concluded Ali Yousif Ahmed Al-Nouri is at risk of fleeing and poses a danger to the community, citing the serious nature of the charges, the life or death sentence Ahmed would face if convicted in Iraq, and his ties to people living in foreign countries.

In the Sept. 21 decision, Morrissey also rejected arguments that Ahmed should be released because of his earlier work in the U.S. as a cultural adviser to the military and because his heart and lung ailments make him vulnerable to being infected with the coronavirus at the detention center in Florence, Arizona, where he is being held.

Ahmed, an Iraqi native who came to the United States as a refugee in 2009 and has since become a U.S. citizen, is accused of leading an al-Qaida group that fatally shot the officers on the streets of the Iraqi city of Fallujah. He has denied involvement in the killings and membership to a terror group.

After settling in Arizona, Ahmed worked as a military cultural adviser, traveling to bases in other states to help personnel as they prepared to deploy to the Middle East to fight the Islamic State, his attorney said. He operated a driving school in Phoenix until his arrest in late January as part of an extradition request made by the Iraqi government.

Prosecutors had argued that Ahmed left Iraq after the killings to avoid prosecution and questioned his credibility, saying he gave conflicting explanations about how he suffered gunshot wounds while in Iraq. They could not determine why he spent time in a Syrian prison before moving to the United States.

Ahmed’s attorney, Ahmed’s lawyer, Jami Johnson, has said in court records there has never been a successful extradition of anyone to Iraq in the more than 80 years that the extradition treaty between the United States and Iraq has been in place.

The United States government is also trying to extradite Omar Abdulsattar Ameen, an Iraqi refugee in Sacramento who was arrested in 2018 on allegations that he killed an Iraqi police officer while fighting for the Islamic State organization. An Iraqi court had issued an arrest warrant for Ameen.

The Trump administration has sharply criticized the Obama-era settlement program, questioning whether enough was done to weed out those with terrorist ties. Ahmed’s attorney has previously claimed the case against her client emerged from information provided by informants who had “everything to gain by delivering the Trump administration a supposed ‘terrorist refugee’ in an election year.”

In both attacks on the two Iraqi officers, armed men emerged from cars, fired at the officers and fled.

In the first shooting, a masked attacker held a gun to a witness’ head, while another masked man tried to open fire at a police officer. But his gun malfunctioned.

Another attacker then killed police Lt. Issam Ahmed Hussein. The witness later identified Ahmed, who was not wearing a mask, as the group’s leader, according to court records.

Four months later, Iraqi authorities say Ahmed and other men fatally shot Officer Khalid Ibrahim Mohammad as the officer sat outside a store. A witness recognized Ahmed, whose mask had fallen off, as one of the assailants, according to court records.