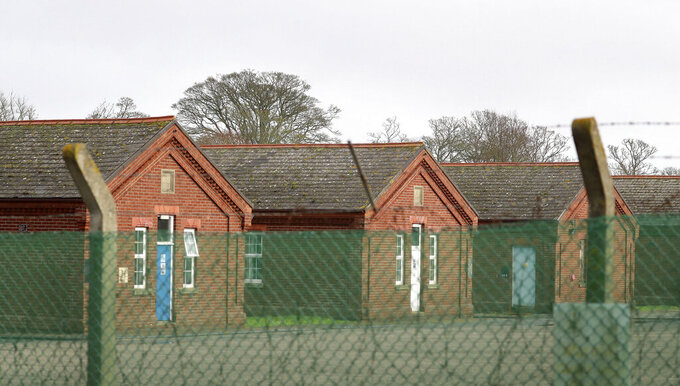 FILE - In this file photo dated Jan. 19, 2021, Napier Barracks in Folkestone, England, which was used by the government to house people seeking asylum in the UK. Britain’s High Court ruled Thursday June 3, 2021, that the government broke the law when it housed asylum-seekers in overcrowded, run-down conditions in a disused army barracks.(Gareth Fuller/PA FILE via AP)

Hundreds of migrants who crossed the English Channel in small boats have been sent to Napier Barracks in southeast England since September, despite a warning from public health authorities that it was unsuitable.

A refugee charity said residents at the barracks faced “freezing cold” conditions over the winter and the government said almost 200 had tested positive for COVID-19 during an outbreak earlier this year. In January there were disturbances and a fire at the facility.

Six asylum-seekers challenged the British government in court, arguing that conditions at the barracks posed “real and immediate risks to life and of ill-treatment.”

Judge Thomas Linden ruled that the barracks did not ensure “a standard of living which was adequate for the health of the claimants.”

He said the facility was “run down,” noisy and overcrowded, and the conditions meant “the mental health of some of the residents was undermined.”

The judge also questioned the “detention-like” setting, given that residents were meant to be living their voluntarily while their asylum applications were processed.

“When this is considered, a decision that accommodation in a detention-like setting -- a site enclosed by a perimeter fence topped with barbed wire, access to which is through padlocked gates guarded by uniformed security personnel -- will be adequate for their needs, begins to look questionable,” the judge said.

The bare-bones barracks accommodation has come to symbolize the British government's attempts to deter migrants from making perilous journeys across the English Channel in small boats.

Home Secretary Priti Patel has vowed to make the journeys “unviable” and says she will reform Britain's “broken” asylum system. Critics say the government's attempts to stop people arriving, which include appointing a former Royal Marine commando as “clandestine Channel threat commander,” are at best ineffective and at worst inhumane.

Refugee advocates welcomed Thursday's court ruling and called for the barracks to be shut permanently.

“This judgment vindicates all those who repeatedly told the government that recklessly forcing hundreds of refugees into crowded camps during a killer pandemic was a gamble with people’s lives,” said Mariam Kemple Hardy at Refugee Action.

“Napier Barracks and all other camp-style accommodation must be shut down,” she said.

The judge declined to rule that the barracks should never be used to house asylum seekers, but said there needed to be “substantial improvements in the conditions there, and lower numbers of asylum seekers living there for significantly shorter periods.”

The Home Office said there had been “significant improvement works” at the barracks, which it said would stay open to “provide safe and secure accommodation.”

“We will carefully consider the ruling and our next steps," it said.

Follow all of AP's stories on global migration issues at https://apnews.com/hub/migration.