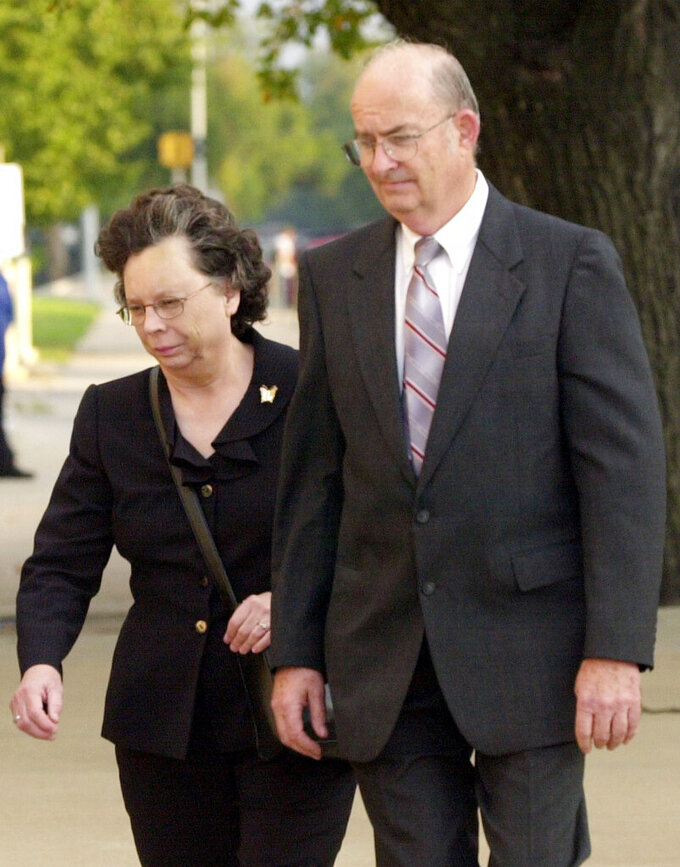 FILE - In this Oct. 5, 2005 file photo, Arlan and Linda Kaufman walk to the federal courthouse in Wichita, Kan., for their trial on several federal charges including servitude. A federal judge has refused to free Arlan Kaufman who once enslaved mentally ill patients in Kansas and forced them to work naked and engage in sexual acts, while billing the government and their families for the therapy. U.S. District Judge J. Thomas Marten cited the "particularly heinous nature" of the abusive treatment of mentally ill patients in a ruling Tuesday, July 21, 2020, to deny the request of Kaufman for compassionate release from his 30-year prison sentence amid the COVID-19 pandemic. (Dave Williams/The Wichita Eagle via AP)

BELLE PLAINE, Kan. (AP) — A federal judge has refused to free an ailing inmate from Kansas who, along with his wife, was convicted of abusing mentally ill patients at their treatment center, including by forcing them to work naked and engage in sexual acts, while billing the government and their families for the supposed therapy.

U.S. District Judge J. Thomas Marten cited the “particularly heinous nature” of the abusive treatment of mentally ill patients in his Tuesday ruling denying the request from Arlan Dean Kaufman for compassionate release from his 30-year prison sentence because of the COVID-19 pandemic.

Kaufman and his wife, Linda, were sentenced in 2006 on multiple counts of conspiracy, forced labor, involuntary servitude, health care fraud, making a false writing and obstructing a federal audit.

The couple owned and managed the Kaufman House Residential Care Treatment Center, an unlicensed residential home for the chronically mentally ill in Newton, which is 25 miles (40 kilometers) north of Wichita.

The crimes began in 1984 and continued until their 2004 arrests. The servitude counts stem from nude manual labor the residents did at the Kaufmans’ farm in neighboring Butler County.

Arlan Kaufman, who is 83 and uses a wheelchair, asked the court to free him from the remaining 15 years of his imprisonment because of the risk of death from COVID-19. His attorney in a court filing said he suffers from prostrate cancer, vascular disease, kidney disease and other medical problems.

“It is inhumane and unnecessarily punitive to keep an 83-year-old man with Stage 4 prostate cancer imprisoned given his deteriorating health and during the COVID-19 pandemic," his lawyer wrote to the court.

But federal prosecutors urged the court, on behalf of “the courageous victims who suffered at the hands of this defendant,” to deny the request for early release. It noted that the Bureau of Prisons has taken significant measures to protect the health of inmates in its charge.

Marten said the reduction of the sentence, under the circumstances of this case, would be “a windfall to the defendant which would fail to promote respect for the law and would undermine just punishment.”