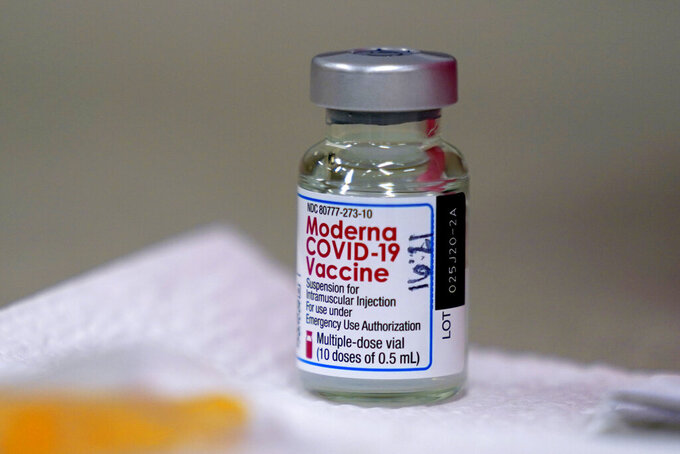 TOPEKA, Kan. (AP) — Democratic Gov. Laura Kelly on Wednesday received the first of two COVID-19 vaccine shots while some top Republican officials passed, for now, because not all health care workers and nursing home residents have received theirs.

Kelly designated herself and 10 other state officials as eligible to start vaccinations this week in an effort to protect state government's “continuity of operations” during the coronavirus pandemic. The others are the lieutenant governor, attorney general, secretary of state, state treasurer, insurance commissioner and Kansas Supreme Court chief justice and four Republican leaders in the GOP-controlled Legislature.

The governor also said Wednesday that “hundreds” of other, non-elected state officials have been made eligible for early vaccines by their agencies.

“We're putting them in line so that we can ensure that state government can continue to function,” Kelly said during a pre-shot Statehouse news conference.

The governor's staff had said she would get vaccinated when it was “her turn.” However, her office said Wednesday that state government has had a “continuity” plan for years that covered vaccines for key officials during a pandemic. Kelly disclosed last week in an AP interview that she would have a list for coronavirus vaccines.

But the legislative leaders and GOP Attorney General Derek Schmidt said they would wait. Most of those Republicans said they didn't want to jump in line ahead of health care workers, nursing home residents or other vulnerable Kansans.

“We should not be giving politicians access to scarce vaccine doses until vulnerable Kansans have been protected," incoming Senate President Ty Masterson, an Andover Republican who had COVID-19 this fall, said in a statement that prompted criticism from Kelly's office over him not consistently wearing a mask at the Statehouse.

Kelly said getting vaccinated now would show that elected officials want to work together to promote efforts to combat the virus.

“I think they ought to step up, but obviously, that’s an individual choice,” she said.

Kelly received her first shot in her left arm Wednesday evening, seated in a room at a Kansas National Guard armory in Topeka.

“Honestly, I didn't feel anything,” Kelly said. “No pain, but hopefully a lot of gain.”

Norman said Kansas will have received almost 184,000 vaccine doses by Friday, including second doses for 24,000 people.

The University of Kansas Health System might need until the end of March to vaccinate its 14,000 health care workers, according to spokeswoman Jill Chadwick. And about one-third of the roughly 6,000 health care workers in Douglas County in northeast Kansas have been inoculated, said Charlie Bryan, business systems analyst with the local health department.

In Ford County in southwest Kansas, about 200 health care and ambulance workers had received shots as of Tuesday afternoon, said Angela Sowers, the county Health Department administrator. But she said about 250 hospital and EMS staff must be vaccinated before the county can move to the next group, including people 75 and older and essential workers such as grocery store clerks, teachers, and others who can’t work from home.

In Wilson County in southeast Kansas, Health Officer Jennifer Bacani McKenney wasn't sure when the county would get more vaccine doses. Its supply was running out Tuesday.

McKenney said all health workers who wanted a vaccine had been inoculated. However, she said, about 40% of those eligible for shots so far have declined, something she called “disheartening.” With about 30 of roughly 225 vaccines left, Wilson County began inoculating essential workers, putting a priority on local government and teaching staff, McKenney said.

"But it just goes to show even people who live in what we’re dealing with every day still are not jumping at the vaccine,” McKenney said.

Even some of Kelly's fellow Democrats were wary of how prioritizing state officials for vaccination would play with constituents. Rep. Jason Probst, a Hutchinson Democrat, said lawmakers “shouldn't be bumped to the front of the line," but that the state should "make sure that the key players are able to continue to do their work.”

The governor and top GOP lawmakers have been at odds frequently for months over her handling of the pandemic.

But Tim Shallenburger, a former state treasurer, Kansas House speaker and state Republican Party chairman, said legislative leaders should get vaccinated now, and he would if he were in that position.

“I know that the Facebook crazies would complain about it, but, you know, they need to stay well, and they have jobs to do,” Shallenburger said.

Andy Tsubasa Field is a corps member for the Associated Press/Report for America Statehouse News Initiative. Report for America is a nonprofit national service program that places journalists in local newsrooms to report on undercovered issues.