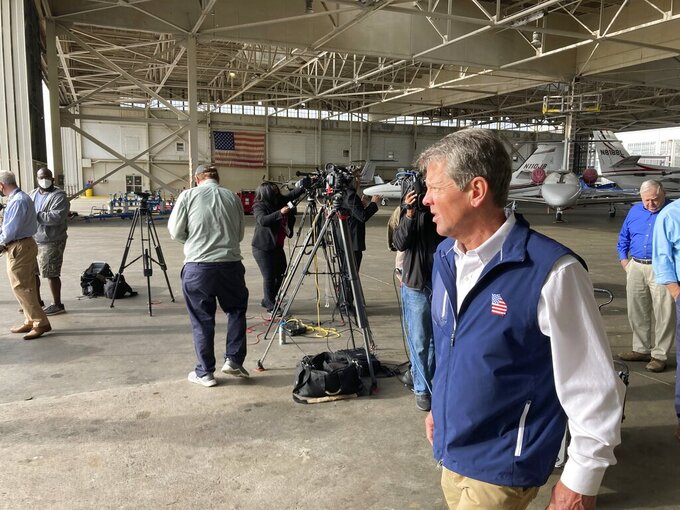 Georgia Gov. Brian Kemp walks to board an airplane Tuesday, May 11, 2021 at DeKalb-Peachtree Airport in Chamblee, Ga. Kemp announced he was suspending state taxes on gasoline and diesel through Saturday to give price relief following a pipeline outage. (AP Photo/Jeff Amy)

ATLANTA (AP) — Georgia is cutting off federal unemployment programs that provide a $300-a-week boost to people on the jobless rolls, as well as programs that pay federal money to people not usually eligible for state unemployment or who have been on jobless aid for longer than the state provides, a move that could reduce incomes of about 390,000 jobless Georgians.

Gov. Brian Kemp and Labor Commissioner Mark Butler announced the decision Thursday to quit the programs as of June 26. Both of the elected Republicans had indicated worker-hungry employers are demanding that the state do more to force people into the workforce.

“We’re not doing away with regular unemployment,” Kemp said in an appearance on Fox News. “We’re just taking away this federal subsidy that’s encouraging people not to get in the workforce.”

Advocates for keeping the benefits say it's still too soon to remove extra support for the unemployed and that the labor market remains deeply disrupted, especially among women who are struggling to provide child care to children who are neither in school nor in child care five days a week. About 32,000 Georgians filed new unemployment claims in the week that ended May 8, a number that remains well above pre-pandemic levels.

Elizabeth Knight, a Savannah resident, said she was furloughed in July and terminated in November from her job as an employment counselor for the disabled because the COVID-19 pandemic shut down operations. She's been drawing unemployment since. Knight said one issue holding her back is that her son attends school in person only three days a week.

“It’s kind of hard to go back and try to find a new job when my current job is not available anymore,” Knight said. “Now I have to go and find another career.”

Georgia is the latest state to announce it's pulling out of federal programs that were supposed to last through September. Ohio and Arizona made similar announcements Thursday. All the states that have pulled out are led by Republicans, including Alabama, South Carolina and Tennessee.

The Georgia Chamber of Commerce and a number of other business groups on Monday called for suspending the benefits, saying businesses are having trouble finding workers. The groups also called for a broader approach to increasing the workforce, saying employers would be short of labor even if everyone on unemployment got hired.

“This is an issue I’m getting pounded on every day with our small business people,” Kemp said. “It’s not fair to the people that are currently in the workforce. They are getting killed right now, they’re having to work so many hours. They need some help.”

The Century Foundation estimates Georgia workers could lose more than $1.2 billion in income.

For those in the state-run unemployment program, benefits will fall to regular levels, with a weekly maximum of $365 and a minimum of $55.

Butler also said last week that he would reinstate the normal requirement that people drawing benefits search for work “in the next few months,” but didn’t say when.

Cody Hall, a spokesperson for Kemp, suggested in a text message that the federal government could continue to pay special Pandemic Unemployment Assistance to people who aren't usually eligible for unemployment, including the self-employed, independent contractors, gig workers, or employees of churches and nonprofits. Hall didn't immediately respond to requests to clarify how that might work.

The National Employment Law Project suggested in a Tuesday letter to U.S. Labor Secretary Marty Walsh that the federal government could force states to continue paying PUA because Congress didn't provide for an opt-out, or could take over payments itself.

About 121,000 people were receiving traditional unemployment benefits from the state program as of May 8. Another 126,000 Georgians were getting Pandemic Unemployment Assistance, while an additional 143,000 were getting extended benefits under Pandemic Emergency Unemployment Compensation, which provides for another 13 weeks of benefits after the regular 26 weeks run out.

“Gov. Kemp intentionally choosing to end the $300 federal unemployment supplement while Georgians are continuing to live through a pandemic, balance child care needs, and attempt to pay for basic necessities is not consistent with a balanced approach and not responsible,” said Democratic state Rep. William Boddie of East Point, who is seeking his party’s nomination for labor commissioner.