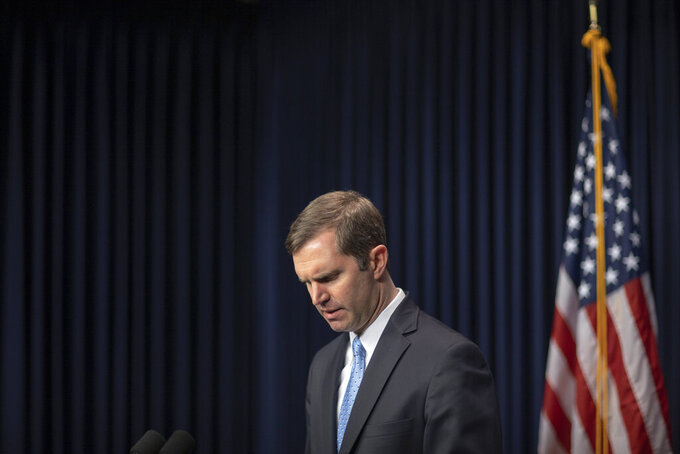 The Democratic governor announced four more vaccination centers will open next week as the coronavirus continues to take a heavy toll. Beshear reported 69 more coronavirus-related deaths — the most posted in one day in Kentucky since the pandemic began. It raised the state's death toll from the virus to at least 3,611.

In another development, all vaccination centers in Kentucky will be asked to give priority to people 70 and older until further notice, Beshear said at a news conference. Other Kentuckians in the two highest-priority categories also remain eligible for vaccinations, he said.

The state also unveiled a website and hotline — vaccine.ky.gov and 855-598-2246 — to help people determine if they are currently eligible for a vaccine and to direct them to an area provider.

The growing inoculation network comes as the state awaits increased vaccine shipments from the federal government. President Joe Biden has promised a roughly 16% boost in deliveries to states over the next three weeks. Beshear, who has expressed frustration with the pace of vaccine deliveries, has called it a “great start,” but he said Thursday that the state is seeing demand for vaccines ”go through the roof.”

“We're going to keep pushing for more supply," he said. “We're going to keep trying to make this easier and easier for you. But remember, the most likely difficulty you'll have is that there is just not enough vaccine. In fact, we're building the infrastructure to where when we get that big push, we're going to be able to get it out fast, get it into your arm fast.”

Meanwhile, the state’s 70 and older population will receive the highest priority for vaccinations starting Monday. Beshear pointed to the enhanced risks they face from the virus.

Other groups in the two highest-priority tiers remain eligible for vaccinations, he said. Those groups also include health care workers, residents and staff at long-term care facilities, emergency responders and K-12 school personnel.

So far, about 100,000 Kentuckians age 70 and older have received at least the first dose of vaccine, said Dr. Steven Stack, Kentucky’s public health commissioner. That leaves about 400,000 in that category who haven't yet received a shot, he said.

If vaccine amounts and available appointments allow, people in the next tier could also be scheduled for vaccinations, he said. The next group includes people 60 and older, anyone older than 16 with high-risk medical conditions and anyone deemed an essential worker.

Meanwhile, the state reported 2,947 new COVID-19 cases, the lowest number for a Thursday in four weeks. The rate of Kentuckians testing positive for the virus dipped to 9.04%.

“Folks, our trends are going in the right way, and that’s a good thing,” the governor said.

More than 1,500 virus patients are hospitalized in Kentucky, including 370 in intensive care units, Beshear said. The record daily report of virus-related deaths stems from a surge of cases weeks ago that included a post-holiday bump, he said.