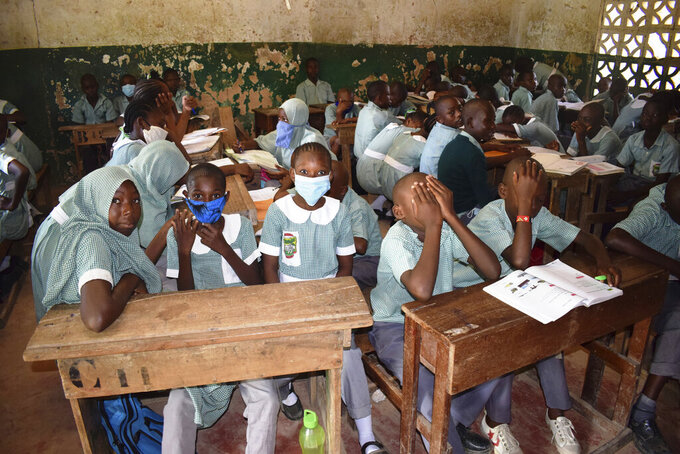 Pupils Concodia Primary school in Mombasa County, Kenya, Monday, Jan. 4, 2021, as schools re-opened after a nine month break due to the COVID-19 pandemic. All Primary and secondary schools in the country were reopened in congested classes despite efforts by the national government to have fulfilled their promises of having new desks and new classes to avoid the social distance calamity which could cause the spread of the pandemic in schools. (AP Photo Gideon Maundu)

NAIROBI, Kenya (AP) — Kenya’s health minister says the country is expected to start receiving 24 million doses next month of the COVID-19 vaccine developed by AstraZeneca and Oxford University, as countries in sub-Saharan Africa begin to announce progress in obtaining the desperately needed vaccines.

Mutahi Kagwe on Wednesday said health workers and teachers will have priority for vaccinations in East Africa’s economic hub and that the shots will be voluntary.

The doses are being obtained through the COVAX facility meant to ensure vaccines for lower-income countries, Dr. Patrick Amoth, director general of public health, told The Associated Press.

Kenya has been participating in a small-scale trial of the AstraZeneca vaccine, which requires two doses administered weeks apart.

The vaccine can be stored at what AstraZeneca has called “normal refrigerated conditions,” which is expected to help in parts of the African continent where poor infrastructure will challenge the mass rollout of doses.

Kenya's news came as South Africa on Thursday announced it will begin receiving 1.5 million doses of the AstraZeneca vaccine later this month, the first announced deal for COVID-19 doses in the country with more than 1 million confirmed infections.

Kenya has had over 97,000 confirmed coronavirus cases in the country of more tan 50 million people.

A recent surge in infections has eased, and schools reopened this week, but health workers in Kenya have expressed concern about the lack of support as some doctors and others die without being able to afford proper care. Doctors across the country held a brief strike last month over inadequate personal protective equipment and insurance.

While some of Africa's richer countries are now announcing vaccine deals — Morocco last month announced it had ordered 65 million doses from AstraZeneca and China’s Sinopharm — it's not clear how long it will take for COVID-19 vaccines to reach countries on the 54-nation continent without the resources to strike their own agreements.

The head of the Africa Centers for Disease Control and Prevention has expressed concern that the coronavirus could become endemic in parts of Africa if it takes more than two or three years to vaccinate 60% of the continent’s population of some 1.3 billion people.