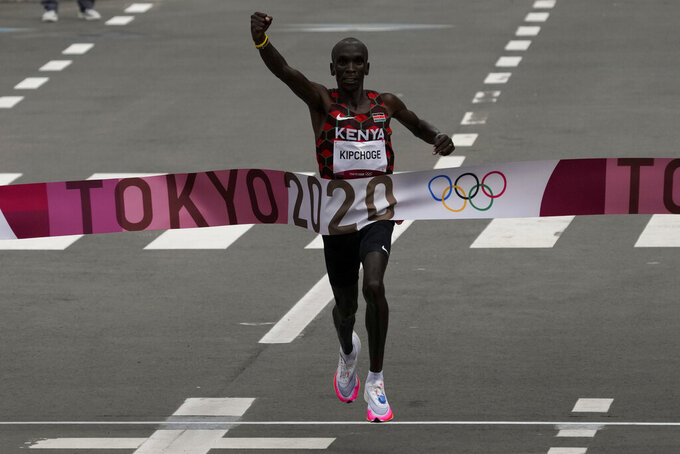 Eliud Kipchoge, of Kenya, celebrates after winning the gold medal in the men's marathon at the 2020 Summer Olympics, Sunday, Aug. 8, 2021, in Sapporo, Japan. (AP Photo/Shuji Kajiyama)

SAPPORO, Japan (AP) — Eliud Kipchoge just decided it was time to sprint away. Simple as that. He never really even looked back.

Except near the finish, simply to see if anyone was there. Of course, no one was even close.

Kipchoge pulled away late and pretty much went for a stroll in the park — Odori Park — as the 36-year-old Kenyan defended his Olympic marathon title Sunday.

Immediately after his finish, he held up two fingers to acknowledge his back-to-back marathon titles.

“King,” one of his fellow racers said as he walked by.

Kipchoge finished in 2 hours, 8 minutes, 38 seconds on a breezy and humid day along the streets of Sapporo. It was 80 seconds ahead of runner-up Abdi Nageeye of the Netherlands. Bashir Abdi of Belgium earned bronze to close out the track and field portion of the Tokyo Games.

This was a running clinic put on by Kipchoge, who even fist-bumped a fellow racer. Kipchoge becomes the third athlete to win multiple gold medals in the men’s marathon, joining Abebe Bikila (1960, 1964) and Waldemar Cierpinski (1976, 1980).

About his reaction before making his move: “That smile is the happiness," Kipchoge said. "They say to enjoy this world is to be happy."

About his legacy: “I want to be the inspiration for the next generation.”

On a day with plenty of cloud cover, Kipchoge simply cruised. The temperature was around 77 degrees Fahrenheit (25 degrees Celsius) at the start and climbing to 84 degrees (29 degrees). The men's race stayed at the same time after the women's race was moved up an hour the day before to avoid the heat.

It was humid, though, at around 81% as the runners wound their way through Sapporo, which is located about 500 miles (about 830 kilometers) north of Tokyo. The race was moved to escape the extreme heat, but it was about the same temperature in Tokyo — and rainy.

Taking the starting line were 106 runners. Finishing were far less, with 30 not making it to the end. The top American was Galen Rupp in eighth place.

“It was a little rough out there,” Rupp said. “My body shut down a little bit. I'm proud of the way I competed. Still tried to hold it together. Everything is telling you to stop. Just the way it goes sometimes.”

The real race was for the other medals. Nageeye, feeling strong and looking solid for silver, spent time urging his training partner, Abdi, through the latter part of the course and into bronze.

“I wait for him to get close and see he was next to me and then I sprinted and he was able to follow me,” explained Nageeye, who's also trained with Kipchoge. “It's amazing we can share this moment. It's crazy.”

Along the way, runners were treated to actual fans clapping and cheering. One fan even brought drums, making the atmosphere feel almost normal. Spectators haven’t been allowed in the venues during the Tokyo Olympics because of coronavirus protocols.

The fans saw a dominating performance from Kipchoge, who was a huge favorite as both the defending champion from Rio de Janeiro and the world record holder (2:01:39). In October 2019, he became the first to complete a marathon in under two hours. The time didn’t count as a world record, though, because it wasn’t held under race conditions.

Already etched in the Kenyan record books, Kipchoge added another chapter: He joined Kip Keino and Vivian Cheruiyot on the women’s side as the only ones from the country to win four Olympic medals.

All three medalists stood out in white-and-pink versions of Nike shoes.

Since the 2016 Rio Games — the marathon medalists all wore Nikes — there’s been a debate over footwear technology. Nike created a game-changing shoe with its Alphafly Next% sneaker, which featured carbon-fiber plates for more spring and faster times. Kipchoge wore a prototype of the Alphafly when he dipped below two hours.

World Athletics later issued a set of complicated guidelines about what constituted a “legal” shoe for distance running.

On this day, it was simply about catching Kipchoge.

“Kipchoge is Kipchoge — no one can go at that pace," Abdi said.

Kipchoge diligently trained at elevation to get ready for this race. He said the key to running “is not magic science. It’s not rocket science, to be at the top for a long time.”

Instead, he attributes his “systems” for his success — training partners who can push him and a coach who can teach.

“I have what it deserves for me to actually stay long,” he said.

This may or may not be his last big race. He played coy when asked about it recently.