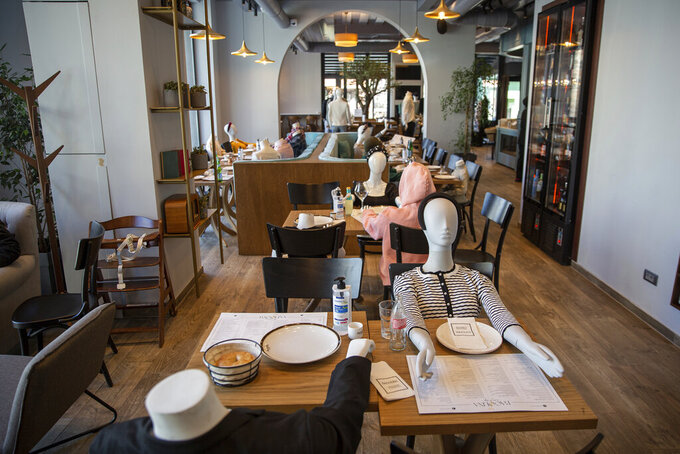 Mannequins are positioned at the tables of Bagolina eatery eatery, as a protest against the latest government COVID-19 lockdown measures in Kosovo capital Pristina, Friday, April 9, 2021. Kosovar association of gastronomy have found an innovative way of protesting, sitting mannequins instead of customers in chairs of closed restaurants and cafeterias following the government's recent latest lockdown measures. (AP Photo/ Visar Kryeziu)

PRISTINA, Kosovo (AP) — A downtown restaurant in Kosovo’s capital filled its tables with mannequins Friday in a symbolic protest of the government’s decision to close eateries for two weeks in response to a surge of COVID-19 cases.

Petrit Kllokoqi, owner of Bagolina in Pristina, brought in the mannequins at breakfast and lunchtime.

“The government has not shown us any evidence that gastronomy is causing the surge,” Kllokoqi said.

The Kosovo government decided earlier this week to close all restaurants during April 7-18. The order affects about 4,000 restaurants and cafes with some 14,000 employees.

Kosovo's gross domestic product fell 4.4% last year due to the pandemic, according to preliminary reports from the government and international institutions. Restaurant owners say financial support the government provided has been inadequate.

Kllokoqi, who is head of the Kosovo Gastronomers Association, said he already had cut his staff to stay in business.

Kosovo, which has a population of about 1.8 million, has reported 96,212 confirmed cases and 1,960 virus-related deaths since the start of the pandemic.

Officials said hospitals are reaching their full capacity due to a recent surge of about 1,000 new cases a day.

Kosovo started its vaccination drive this month after receiving a first batch of 24,000 AstraZeneca vaccine doses from the World Health Organization-backed COVAX program.