Kroos has medical tests at German team camp after COVID-19 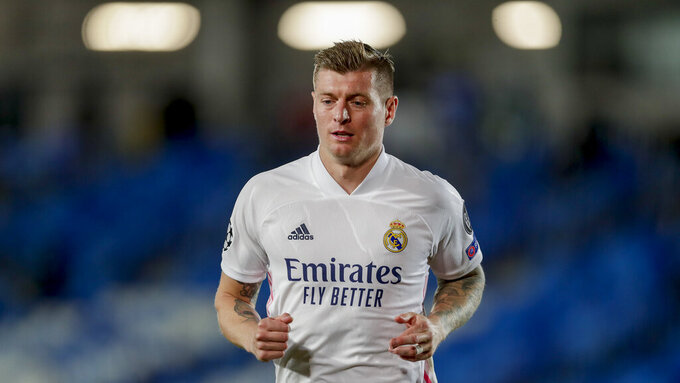 SEEFELD, Austria (AP) — Toni Kroos has arrived at Germany’s preparation camp for the European Championship but the Real Madrid midfielder was to undergo medical tests Monday before he can start training with his teammates.

Kroos was only allowed to fly to the camp in Tyrol, Austria on Sunday after 14 days of quarantine and a negative test result for the coronavirus. Madrid said on May 17 that he tested positive while already in isolation after contact with another person who recorded a positive test.

The 31-year-old midfielder was to give blood samples and have an electrocardiogram among other tests on Monday to see what kind of training program he needs before he joins the rest of the team. He said last week on a podcast he hosts with his brother that he had a fever.

Kroos will miss Germany’s warm-up friendly against Denmark on Wednesday.

Manchester City midfielder İlkay Gündoğan and Chelsea players Kai Havertz, Antonio Rüdiger and Timo Werner will also miss the game due to their involvement in the Champions League final on Saturday.

Bayern Munich players Leon Goretzka and Jamal Musiala are also out of Wednesday's game in Innsbruck. Goretzka, who is scheduled to join the squad on Tuesday, tore a muscle in a game for Bayern on May 8, while Musiala has been unable to train with the squad in Tyrol due to a muscular problem.

Germany has another friendly against Latvia on June 7 before starting its Euro 2020 campaign against France in Munich on June 15.