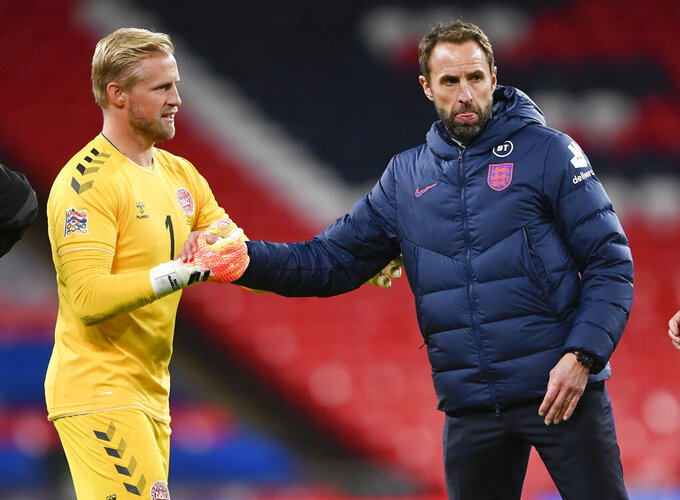 Germany midfielder Toni Kroos believes players have become the “puppets" of soccer authorities. England manager Gareth Southgate can't understand why the season has been crammed into a congested period.

Players and coaches alike are using the international break to question whether the coronavirus-affected schedule is proving detrimental to players' health.

Games are being squeezed into a narrower time frame due to the months lost during the pandemic and European nations are in the middle of a triple header — including friendlies or European Championship qualifiers, and matches in the Nations League, which was launched in 2018.

“We players are just the puppets of FIFA and UEFA with all these additional (competitions) that are invented. Nobody is asked,” Kroos said in a podcast called “Einfach mal Luppen."

The 30-year-old Real Madrid player is also uneasy about going to Saudi Arabia to play the Spanish Super Cup and with FIFA's plans to expand the Club World Cup from seven to 24 teams. The 2014 World Cup winner said he felt such competitions were designed “to suck everything out financially, and of course to suck everything physically out of every single player.”

He is due to join his Germany teammates on Thursday ahead of its Nations League games against Ukraine and Spain.

Southgate's England is in action on Thursday in a friendly against Ireland before Nations League games in Belgium and at home to Iceland.

The coach lost Liverpool defender Joe Gomez on Wednesday to a knee injury that he fears could have been caused by the extra workload on players.

“We gave him and other lads who have been in European matches, who played Sunday, an extra day recovery, and yet still something like this has happened,” Southgate said. “The pandemic has thrown up all sorts of difficulties for people, but everybody has tried to cram the program into a smaller period. Nobody has given way and people haven’t collaborated enough."

England played twice in September and three times in October.

“We are going to see injuries," he said, "and it is a desperately sad situation because when you see the impact on the individual it hits home even more. So we are now trying to effect things in reverse or too late."

Southgate cannot understand why the offseason break was so short, with some players completing European campaigns in August and returning to action within weeks for the new season.

France coach Didier Deschamps believes the solution would be reducing leagues from 20 to 18 teams, like in Germany.

“You see calendars today, with these successions of matches, you’ve never had that before,” he said. “It’s difficult.”