Kuwait says its ruling emir flies to US for medical checks 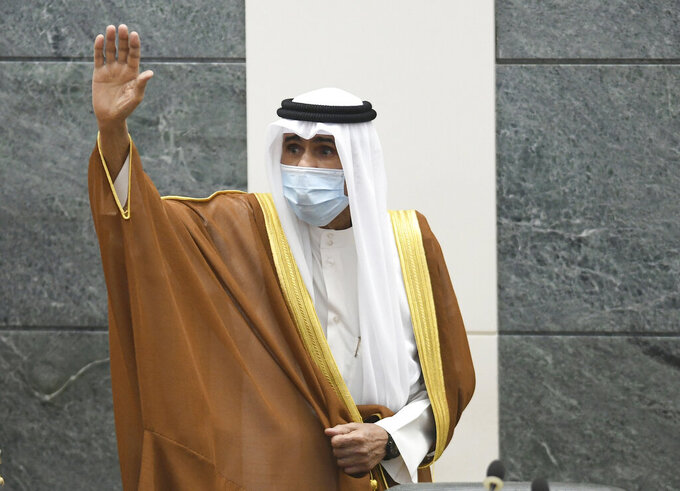 FILE - In this Sept. 30, 2020 file photo, the new Emir of Kuwait Sheikh Nawaf Al Ahmad Al Sabah, waves after he was sworn in at the Kuwaiti National Assembly. Kuwait said Thursday, March 4, 2021, that the 83-year-old ruling emir of Kuwait has flown to the United States for medical checks, just months after ascending the throne. (AP Photo/Jaber Abdulkhaleg, File)

Given his age, Sheikh Nawaf’s medical trip raises concerns over his health condition, of which little is known. State-run news previously reported that he traveled to Germany for back surgery in 2013 and years later to the U.S. for medical tests. The health of Kuwait's leaders remains a sensitive matter in the tiny Mideast nation that has seen internal power struggles behind palace doors.

After his predecessor, Sheikh Sabah Al Ahmad Al Sabah, fell ill last summer, a U.S. Air Force C-17 flying hospital ferried him to Rochester, Minnesota, home of the flagship campus of the Mayo Clinic, where he later died. The dramatic airlift reflected the close ties between the two nations. Over the years, Kuwait’s rulers have routinely visited American hospitals.

Sheikh Nawaf’s trip comes just days after the country's prime minister appointed a new government amid deepening deadlock with parliament, which has been a first major challenge to the emir. The sheikhdom faces a series of mounting crises, including a surge in coronavirus infections and its worst liquidity crunch in decades.

It has been a staunch U.S. ally since the 1991 Gulf War expelled the occupying Iraqi forces of Saddam Hussein.