Kuwait's new emir asks Cabinet to stay on, despite custom 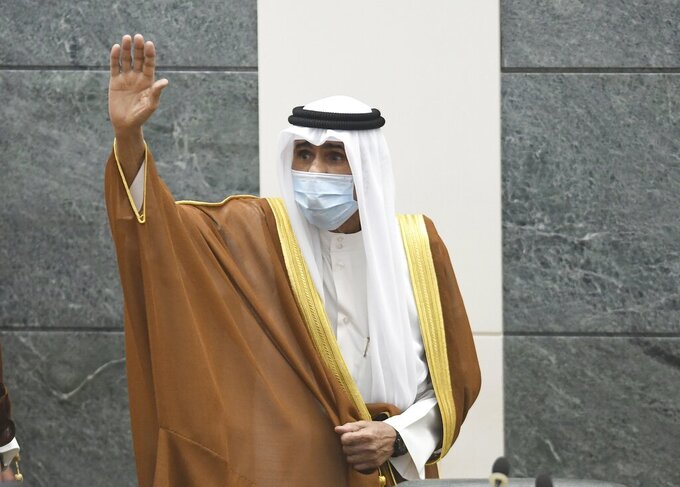 The new Emir of Kuwait Sheikh Nawaf Al Ahmad Al Sabah, waves after he performed the constitutional oath at the Kuwaiti National Assembly in Kuwait, Wednesday, Sept. 30, 2020. Kuwait's Sheikh Nawaf Al Ahmad Al Sabah was sworn in Wednesday as the ruling emir of the tiny oil-rich country, propelled to power by the death of his half-brother after a long career in the security services. (AP Photo/Jaber Abdulkhaleg)

DUBAI, United Arab Emirates (AP) — The new emir of Kuwait, who ascended the throne following the death of his half-brother last week, has asked the Cabinet to continue performing its duties despite the prime minister’s offer to resign, the state-run news agency reported Tuesday.

The prime minister of the tiny oil-rich Gulf country and his Cabinet made the offer in a nod to the new emir, Sheikh Nawaf Al Ahmad Al Sabah, giving him the chance to appoint a replacement as custom dictates.

But Sheikh Nawaf “affirmed his great confidence” in the government of Prime Minister Sheikh Sabah Al-Khaled Al Hamad Al Sabah, according to Kuwait’s state-run news agency, KUNA. He asked the same government to “continue carrying out its tasks” ahead of parliamentary elections tentatively set for late November.

The move may signal Sheikh Nawaf’s desire to follow the political path charted by his predecessor, the late Sheikh Sabah Al Ahmad Al Sabah, and also allows Kuwait to avoid the difficulties of forming a new government ahead of elections, when the Cabinet will have to dissolve itself anyway.

Despite Sheikh Nawaf’s high praise for the current Cabinet, 10 lawmakers last month submitted a no-confidence motion against Kuwait’s deputy prime minister and interior minister amid growing dissatisfaction over the government’s handling of the coronavirus pandemic and budgetary problems.

Kuwait’s treasury is running out of cash, prompting a major credit agency last month to downgrade the wealthy country for the first time in its history.

As crown prince, Sheikh Nawaf was not known for making any major policy decisions, and at age 83, his greatest impact may be in his choice of a successor. Following the death of Sheikh Sabah, who commanded great respect in the region as a seasoned diplomat, speculation has mounted over the next crown prince, especially as top contenders in the past have feuded over corruption allegations.

Kuwait stands out among other monarchies in the Persian Gulf for its empowered parliament, which can reject the emir's pick.