Lamont urges residents to stay close to home for holidays 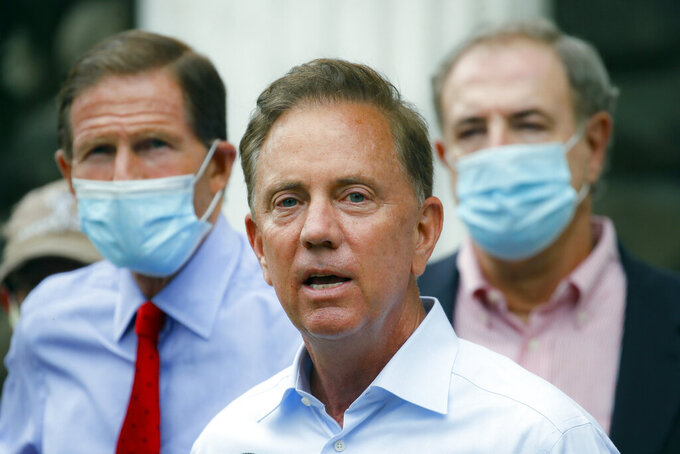 FILE- In this Aug. 7, 2020, file photo, Connecticut Gov. Ned Lamont addresses the media in Westport, Conn. While "things have calmed down" since the uptick in COVID-19 infections following Thanksgiving gatherings, Lamont urged residents on Wednesday, Dec. 23, 2020, to limit their interactions with family and friends over the Christmas and New Year's holidays to prevent another surge. (AP Photo/John Minchillo, File)

While “things have calmed down” since the uptick in COVID-19 infections following Thanksgiving gatherings, Connecticut Gov. Ned Lamont urged residents on Wednesday to limit their interactions with family and friends over the Christmas and New Year's holidays to prevent another surge.

The Democrat said there appears to be more air travel, compared to the Thanksgiving holiday, and he urged people not to fly unless they absolutely have to. Those who do fly should test and quarantine, he said. He also urged people to celebrate with just their immediate family.

“No need for additional restrictions or anything. I think we found that we’ve got some stability right now,” said Lamont, adding that “things have calmed down and stabilized” with infection rates since Thanksgiving.

“The most important thing you can do is have you stay close to home," he said, noting how the biggest flareups of COVID-19 cases in the U.S. over Thanksgiving occurred in places with the most people traveling. “I’m urging, with every bone in my body, to ask people to be cautious a little bit longer. That’s how we get through this.”

Over the past two weeks, the rolling average number of daily new cases has decreased by 858, a decrease of 30.8%, according to data collected by Johns Hopkins University Center for Systems Science and Engineering. There were 859.4 new cases per 100,000 people in Connecticut over the past two weeks, which ranks 24th in the country for new cases per capita. One in every 265 people in Connecticut tested positive in the past week.

As of Wednesday, the state reported 1,155 hospitalizations, a decrease of four since Tuesday. Meanwhile, the number of COVID-associated deaths climbed by 32 people, for a total of 5,735.

In other coronavirus-related news in Connecticut:

As of Wednesday, Lamont said 16,487 doses of vaccine have been administered in hospitals and some long-term care facilities. He said 76 locations in Connecticut are now vaccinating health care workers.

The number is likely much higher because the state is still awaiting figures for how many doses have been administered in the majority of nursing homes. The administration hopes a third of the state's facilities will have administered their first vaccinations to staff and residents by the end of this coming weekend. He said it's likely two-thirds of the nursing homes will have received them by the end of next week.

With plans underway between the federal government and Pfizer to provide more vaccine to the states, Lamont said he's hopeful the timeline for vaccinating frontline workers, people over 65 and others can be accelerated.

Lamont on Wednesday evening signed a new executive order extending the state's moratorium on evictions again until Feb. 9. The order includes some exceptions, such as “serious nuisance” and “serious nonpayment of rent,” which is defined as six or more months of rent due on or after March 1.

The order also renews the option for tenants to apply a portion of their security deposit in excess of one month’s rent toward their rent payment.

Connecticut has no plans to follow New York City's lead in sending sheriff’s deputies to the homes or hotel rooms of all travelers coming from the United Kingdom to ensure they comply with the city’s two-week COVID-19 quarantine requirement.

At the request of New York Gov. Andrew Cuomo, airlines flying from London to New York agreed this week to test passengers before they board. Lamont praised that move.

“I am glad that Andrew Cuomo is being strict and (Gov.) Phil Murphy is being strict ... in New Jersey,” Lamont said. “I’m glad that they are at least enforcing the testing protocols, so you test before you get on that plane. There’s a highly contagious form of the virus in Britain ... We found last time how travel could accelerate the spread.”

Lamont said Connecticut officials generally are not notified about the travelers who land in out-of-state airports and whose final destination is Connecticut. Dr. Deidre Gifford, the state's acting public health commissioner, said those travelers, including someone from the United Kingdom, would still be required to fill out Connecticut's travel advisory form and submit negative test results to the state's Department of Public Health.