The Latest: 10% of Washington town positive for COVID-19 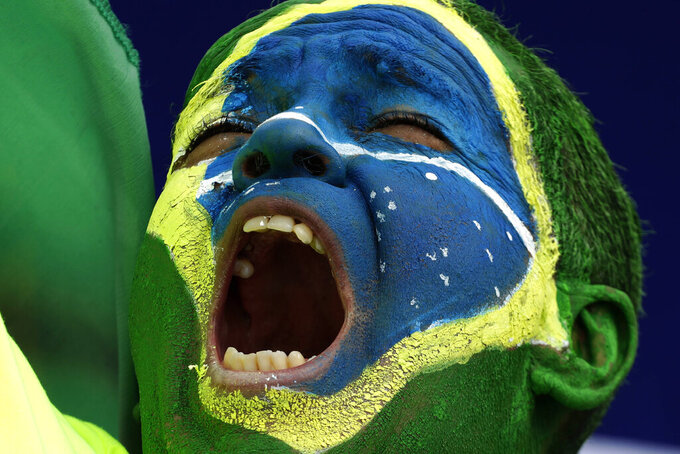 A demonstrator with the Brazilian flag painted on his face, shouts slogans during a caravan backing President Jair Bolsonaro’s anti-coronavirus-lockdown stance, marking May Day, or International Workers' Day, in Brasilia, Brazil, Saturday, May 1, 2021. (AP Photo/Eraldo Peres)

REPUBLIC, Wash. -- About 10% of the population of Republic, a small city in north-central Washington, has tested positive for COVID-19 in an outbreak traced to large indoor events last month at the local Fraternal Order of Eagles hall.

Ferry County Memorial Hospital officials have confirmed more than 100 cases, with one reported death, since the April 9-11 events, including a membership drive that featured dinner, live music and a 1980s-themed karaoke night.

Some patients have had to be transferred to Wenatchee and Yakima because of a lack of capacity. Less than one-quarter of the county’s residents have received a vaccine, according to the health district, but officials said the outbreak has increased interest in it.

CARTHAGE, Mo. — A gathering that traditionally has drawn tens of thousands of Vietnamese Catholics from across the U.S. to southwest Missouri has been canceled for a second straight year because of the pandemic.

The Joplin Globe reports that the city of Carthage and the Congregation of the Mother of the Redeemer in Carthage have decided that the risk of COVID-19 transmission is still too great to hold the Marian Days celebration. Before 2020, the event had taken place in the city every year since 1978, reuniting families and friends separated after the fall of Saigon.

The Rev. John Paul Tai Tran, provincial minister of the congregation, said the decision not to hold the celebration during the first week of August was again difficult.

“Our people come from all over and there are a lot of states in the U.S. where the cases of infection are still booming,” he said.

Carthage police Chief Greg Dagnan said the leaders of the congregation met with city officials Tuesday about the event but had pretty much decided beforehand that it would still be too dangerous.

NEW DELHI — India has opened vaccinations to all adults in hopes of taming a monstrous spike in COVID-19 infections.

The world’s largest maker of vaccines is still short of critical supplies — the result of lagging manufacturing and raw material shortages. Those factors delayed the rollout in several states.

Only a fraction of India’s population likely can afford the prices charged by private hospitals for the shot. That means states and the federal government will be in charge of immunizing 900 million Indian adults.

India set another global record Saturday with 401,993 daily cases, taking its tally to more than 19.1 million. There were 3,523 confirmed deaths in the past 24 hours, raising the overall death toll to 211,853, according to the Health Ministry.

That’s according to an estimate by China’s state railway group. The start to the five-day holiday on Saturday included tourists rushing to travel domestically now that the coronavirus has been brought under control in China.

May Day is offering the first long break for Chinese tourists since the start of the year. A domestic outbreak of the coronavirus before the Lunar New Year holidays in February cancelled travel plans for many after the government advised people to refrain from traveling.

China in recent weeks reported almost no cases of locally transmitted infections. Vaccinations in China, where over 240 million doses of the vaccine have been administered, have boosted confidence about travel.

VATICAN CITY — Pope Francis led a special prayer service in St. Peter’s Basilica on Saturday evening to invoke the end of the pandemic.

Francis, wearing white robes, sat in a chair and fingered the beads of a rosary, while about 200 people, including young children, sat spaced apart according to coronavirus safety protocols and recited the prayers aloud.

The pope prayed that “this hard trial end and that a horizon of hope and peace return.”

Every day, for the rest of the month, various Catholic sanctuaries in the world dedicated to the Virgin Mary will take turns holding a similar rosary service. The initiative ends on May 31, when Francis will lead the rosary recitation in the Vatican Gardens.

TOKYO — The Tokyo Olympics torch relay will take another detour this weekend when it enters the southern island of Okinawa.

A leg of the relay on Okinawa’s resort island of Miyakojima has been canceled with coronavirus cases surging in Japan. Other legs on Okinawa will take place. A 17-day state of emergency went into effect on April 25 in some areas in Japan.

Organizers on Saturday say six people helping with traffic control on April 27 in the southern prefecture of Kagoshima had tested positive. Two were identified as men in their 20s and 30s. This brings the total number of positive tests on the relay to eight, according to organizers.

The relay is made up of a convoy of about a dozen vehicles with sponsors names festooned on them: Coca-Cola, Toyota, and Nippon Life Insurance. The torch bearer follows, each running for a few minutes, before giving the flame to the next runner who awaits holding another torch.

Meanwhile in Tokyo, a six-day diving event, opened with 225 athletes from 46 countries but no fans. The Olympics are scheduled to open on July 23.

The cases and 14 additional deaths reported by the state increased Arizona’s totals to 863,571 confirmed cases and 17,388 confirmed deaths.

The COVID-19-related hospitalizations in recent days hovered above 600, with 635 on Friday. The range was 500 to 600 during most of April, according to the state. The numbers remain well below the pandemic peak of 5,082 on Jan. 11.

LAS VEGAS — Las Vegas has increased its casino capacity and more pandemic-weary tourists are arriving at the entertainment city.

Casino capacity on the Strip increased to 80% and person-to-person distancing drops to 3 feet on Saturday. The boom began in mid-March when casino occupancy went from 35% to 50% under state health guidelines.

Among the first arrivals were people ages 60 and older who were recently vaccinated with time and disposable income. Analysts said pent-up demand, available hotel rooms and $1,400 pandemic recovery checks from the federal government have contributed to the rush.

The Las Vegas Convention and Visitors Authority tallied more than 2.2 million visitors in March. The figure was down 40% from March 2019. Casinos closed from mid-March to early June last year, helping to drive the Nevada jobless rate in April above 30% -- the highest in any state. The current state rate is 8.1%.

There have been 315,000 reported cases and 5,464 confirmed deaths in Nevada. The majority were reported in the Las Vegas area, where most people in the state live.

WASHINGTON — Mississippi has the lowest vaccination rate in the U.S., with less than 31% of its population receiving at least one anti-coronavirus shot.

Alabama, Louisiana, Idaho and Wyoming are the next four, according to an Associated Press analysis of Centers for Disease Control and Prevention data.

Those states vote reliably Republican in presidential races. So Republican leaders are stepping up efforts to persuade their supporters to get the shot, at times combating misinformation.

The five states with the highest vaccination rates backed Democrat Joe Biden in November. New Hampshire leads the nation with 60% of its population receiving at least one dose, followed by Massachusetts, Vermont, Connecticut and Maine

PARIS — Workers and union leaders have dusted off bullhorns and flags that had stayed furled during coronavirus lockdowns for boisterous May Day marches.

In countries that mark May 1 as International Labor Day, workers clamored Saturday for more labor protections and financial support in the midst of the pandemic that has impacted workplaces and economies.

In Turkey and the Philippines, police cracked down on May Day protests, enforcing virus lockdowns.

For labor leaders, the annual celebration of workers’ rights was a test of their ability to mobilize people in the face of the pandemic’s profound disruptions.

Kenyatta announced in his May Day speech that a nightly curfew will move to 10 p.m., following a 72% reduction in new cases. On March 26, 2020, the president ordered the year-long curfew to start at 8 p.m. and prohibited travel in and out of five areas, including Nairobi. That ban also has been lifted.

Kenyatta says the government is allowing church services to resume at one-third capacity and restaurants can serve food on their premises instead of only takeout orders.

Sports events will resume under regulations issued by the Ministry of Health, he says.

WARSAW — Thousands lined for hours Saturday to get immunized with the one-dose Johnson & Johnson vaccine in hopes of engaging in activities and travel.

Temporary vaccination sites were set up in Poland’s 16 main cities to speed up the immunization of the nation of some 38 million, where the rate of coronavirus infections and deaths was recently among Europe’s highest. Each site is equipped and staffed to vaccine 90 people per hour.

People waiting in line in Warsaw say they believed the vaccine will return some degree of normalcy to their lives. Lukasz Durajski, a doctor at the Warsaw location, says the massive public response was “very good news.”

GENEVA — The World Health Organization has given the go-ahead for emergency use of Moderna’s COVID-19 vaccine.

The mRNA vaccine from the U.S. manufacturer joins vaccines from AstraZeneca, Pfizer-BioNTech and Johnson & Johnson in receiving the WHO’s emergency use listing. Similar approvals for China’s Sinopharm and Sinovac vaccines are expected in the coming days and weeks, WHO has said.

The greenlight for Moderna’s vaccine, announced late Friday, took many months because of delays WHO faced in getting data from the manufacturer.

Many countries without their own advanced medical regulatory and assessment offices rely on the WHO listing to decide whether to use vaccines. U.N. children’s agency UNICEF also uses the listing to deploy vaccines in an emergency like the pandemic.

The announcement isn’t likely to have an immediate impact on supplies of Moderna’s vaccine for the developing world. The company struck supply agreements with many rich countries, which have already received millions of doses.

In a statement Friday, CEO Stephane Bancel said Moderna was “actively participating in discussions with multilateral organizations, such as COVAX, to help protect populations around the world.”

He's referring to a U.N.-backed program to ship COVID-19 vaccines to many low- and middle-income countries.

NEW DELHI — A fire in a COVID-19 hospital ward in western India killed 18 patients early Saturday, as the country grappling with the worst outbreak yet steps up a vaccination drive for all its adults even though some states say don’t have enough jabs.

India on Saturday set yet another daily global record with 401,993 new cases, taking its tally to more than 19.1 million. Another 3,523 people died in the past 24 hours, raising the overall deaths to 211,853, according to the Health Ministry. Experts believe both figures are an undercount.

The fire broke out in a COVID-19 ward on the ground floor and was extinguished within an hour, police said. The cause is being investigated.

Thirty-one other patients at the Welfare Hospital in Bharuch, a town in Gujarat state, were rescued by hospital workers and firefighters and their condition was stable, said police officer B.M Parmar. Eighteen others died in the blaze and smoke before rescuers could reach them, Parmar said.

ISLAMABAD — Pakistan's COVID-19 death toll is nearing 18,000 as the country's continues to suffer through its third infection wave of the pandemic.

The military-backed federal body charged with controlling the spread of the coronavirus reported 146 more daily deaths. The number reported Saturday brings Pakistan's overall death toll in the pandemic to 17,957.

Federal Minister for Planning and Development Asad Umar has warned citizens that the number of critically ill COVID-19 patients is rapidly increasing and the next few weeks are very critical for impoverished Pakistan.

He urged people to strictly adhere to social distancing rules to help the government's efforts to limit infections.

Pakistan has deployed troops in high-risk cities to stop people from violating social distancing rules and to close business at early evenings. Offices are also working with reduced staffs and for shorter hours.