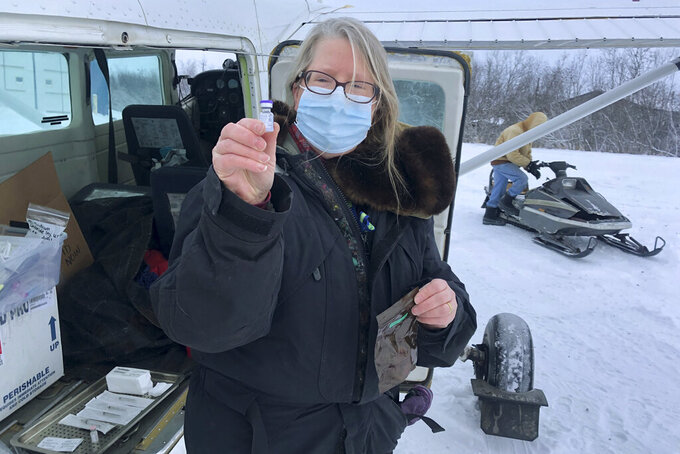 BEIJING — Chinese officials say 11 more people have been diagnosed with COVID-19 in a southwestern city bordering Myanmar that is the scene of China’s current sole active outbreak.

Cases in the Yunnan province city of Ruili have topped 100, including those not showing symptoms.

However, large-scale transmission appears to have been curbed by a campaign to vaccinate all 300,000 residents of the city. People there have been told to stay home and 45 residential compounds are under complete lockdown.

China has virtually stamped out new local cases across the country through aggressive lockdowns, mask wearing, electronic monitoring and other measures. With most economic and social activity resuming, those measures are being gradually reduced, although mask wearing indoors and on public transport remains almost universal.

CASES: The seven-day rolling average for daily new cases in the U.S. increased over the past two weeks from 53,651 on March 23 to 64,791 on Tuesday, according to Johns Hopkins University.

DEATHS: The seven-day rolling average for daily new deaths in the U.S. decreased over the past two weeks from 821 on March 23 to 774 on Tuesday, according to Johns Hopkins University.

— EU agency: No restrictions on AstraZeneca vaccine for those over 18

SEOUL, South Korea — South Korea has reported 700 more cases of the coronavirus as the speed of viral spread approaches levels seen during the worst of the country’s outbreak in winter.

The numbers released by the Korea Disease Control and Prevention Agency on Thursday brought the national caseload to 107,598, including 1,758 deaths.

The daily jump was the highest since Jan. 5 when 714 cases were reported.

Around 500 of the new cases are in the densely populated Seoul metropolitan area, which has emerged as the center of the country’s epidemic since a winter surge that peaked with more than 1,200 infections added on Christmas Day.

Health authorities, who are also wrestling with a slow vaccine rollout, are expected to announce measures to strengthen social distancing following a meeting Friday.

Currently, only people 50 years and older as well as anyone 35 to 49 with chronic health conditions are authorized to receive a vaccine.

Gov. Pedro Pierluisi also announced Wednesday that he is implementing more stringent measures to fight a recent spike in coronavirus infections. A 10 p.m. to 5 a.m. curfew will go into effect Friday, and businesses will be forced to close by 9 p.m. That is two hours earlier than has been allowed.

Puerto Rico has recorded more than 199,000 coronavirus cases and more than 2,000 deaths related to COVID-19.

DETROIT — Michigan’s state health director says the government is focusing on getting more people vaccinated rather than imposing new restrictions on the economy amid a wave of new coronavirus cases and the crowding of hospitals with COVID-19 patients.

Elizabeth Hertel said Wednesday: “Our focus right now continues on making sure we’re getting as many people vaccinated as possible. We still do have a number of restrictions in place that limit gathering sizes.”

Her comments came as federal statistics showed Michigan leads the U.S. in new coronavirus cases. The state recorded more than 46,000 cases, or 469 per 100,000 people, in the last seven days. That is far ahead of No. 2 New Jersey, at 321.

MADRID — Spain plans to join other European nations in limiting the use of the AstraZeneca vaccine to the elderly due to concerns over links to extremely rare blood clotting.

Spanish Health Minister Carolina Darias said after meeting with regional health chiefs Wednesday that authorities will limit the use of the vaccine in those over 60 years old.

The decision came after the European Medicines Agency said it had found a “possible link” between the shot and the rare clots.

Last week Germany and France limited the vaccine to elderly groups, and earlier Wednesday British authorities recommended that the vaccine not be given to adults under 30. Belgium said Wednesday it would not allow its use for people under age 56.

The EMA advised no such age restrictions, saying the benefits of the vaccine far exceed the very rare cases of thrombosis.

TALLAHASSEE, Fla. — The office of Florida Gov. Ron DeSantis confirms he has received a single-dose coronavirus vaccine. He did so out of the public eye even as governors elsewhere across the political spectrum have been vaccinated publicly to reassure Americans that the shots are safe.

DeSantis had recently said he would get vaccinated soon — but no announcement was made by his office, nor was there any media presence to witness the event. Some of his top lieutenants said they were unaware the governor had already been vaccinated, even as they work to persuade Floridians to get inoculated against a virus that has infected more than 2 million people in Florida and killed nearly 34,000.

Little has gotten the vaccine and says he strongly encourages others to get vaccinated as well. But he says he has serious concerns that a vaccine passport requirement will violate medical privacy rights. Texas Gov. Greg Abbott issued a similar order Wednesday and Florida Gov. Ron DeSantis did so Friday.

The White House has ruled out a national “vaccine passport,” saying it is leaving it to up the private sector if companies want to develop a system for people to show they have been vaccinated.

TORONTO — Canada’s most populous province plans to vaccinate those 18 and over in hot spot areas in and around Toronto and plans to vaccinate some teachers amid a third surge of coronavirus infections fueled by more-contagious virus variants.

Ontario declared another state of emergency and will now allow all adults in certain postal codes to get priority access to vaccines. Ontario will also close nonessential stores to in-person shopping and limit big box stores to essential items such as groceries and pharmacy supplies.

The province is calling its latest measures a stay-at-home order though schools in most of the province will remain open and golf courses remain open. Ontario has seen seeing more than 3,000 new infections a day in recent days and record intensive care numbers.

RIO DE JANEIRO — Brazilian President Jair Bolsonaro says there will be “no national lockdown,” ignoring growing calls from health experts a day after the nation saw its highest number of COVID-19 deaths in 24 hours since the pandemic began.

Brazil’s Health Ministry registered 4,195 deaths on Tuesday, becoming the third country to go above that threshold as Bolsonaro’s political opponents demanded stricter measures to slow down the spread of the virus.

“We’re not going to accept this politics of stay home and shut everything down,” Bolsonaro said Wednesday, resisting the pressure in a speech in the city of Chapeco in Santa Catarina state.

Brazil’s conservative president also defended the use of so-called early treatment protocols, which include anti-malaria drug hydroxychloroquine. No scientific studies have found the drug effective to prevent or treat COVID-19.

In an open letter published Tuesday in the newspaper O Globo, the Brazilian Association of Collective Health called for a three-week nationwide lockdown.

On Wednesday, the country also reported 276 more deaths in the past 24 hours, the highest level so far.

The overall death toll since the start of pandemic now stands at 32,943, while the total number of infections has reached 3.6 million.

COVID-19 cases have surged to alarming levels since the government eased restrictions at the beginning of March.

The government announced renewed weekend lockdowns and the closure of cafes and restaurants during the Islamic month of Ramadan, which begins on April 13. But experts have raised questions over the effectiveness of the measures.

The health minister has said the more contagious variant first detected in Britain accounts for 75% of cases.

MONTGOMERY, Alabama — Alabama Gov. Kay Ivey urged people to use common sense in the fight against the coronavirus as she lifts the state’s mask order.

She said a “greatly slimmed down” health order Friday will have few restrictions while encouraging people to keep taking precautions. Alabama ranks nearly in the bottom in the nation for the percentage of people who are fully vaccinated at 13.8%, according to the Centers for Disease Control and Prevention.

Alabama opened vaccine eligibility to anyone 16 and older two days ago. State health officials say virus hospitalizations, positive tests and daily case numbers are hitting some of the lowest numbers in a year.

Only 25.9% of Alabama’s population has received at least one dose.

BANGKOK — Health officials in Thailand have confirmed the country’s first local cases of the coronavirus variant first detected in Britain.

The variant was found in customers of nightlife venues in the capital of Bangkok. The virus threat comes at a particularly vulnerable time for Thailand. Next week, Thais celebrate the traditional Songkran New Year’s holiday. It usually means an exodus of people from cities to visit relatives in other provinces, risking further spread of the virus.

Less than 1% of the country’s 69 million people have been vaccinated against the coronavirus, according to the World Health Organization.

WASHINGTON — The U.S. government says more than a half million Americans have already taken advantage of the Biden administration’s special health insurance sign-up window that’s tied to the COVID-19 pandemic.

The numbers released Wednesday by the Centers for Medicare and Medicaid Services show that 528,005 people newly signed up for government-sponsored private plans from Feb. 15 to Mar. 31.

The Congressional Budget Office estimates about 3 million people lost coverage because of the pandemic. Some experts estimate numbers in the range of 5 million to 10 million.

There are roughly 1,400 of the health centers nationwide, which serve communities both hardest hit by the coronavirus and the most difficult to reach for vaccination.

The White House says the health center program is essential to ensuring equity in vaccine distribution, adding that a majority of doses distributed by the community health centers have gone to racial and ethnic minorities.