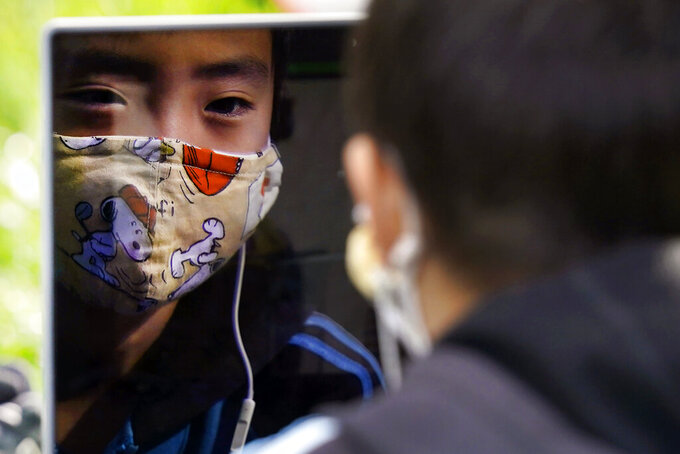 LITTLE ROCK, Ark. -- Arkansas Gov. Asa Hutchinson said Sunday that he believes his proposal to remove a mask mandate intended to slow the spread of the coronavirus will take place as planned at the end of the month.

On CNN’s ‘State of the Union,’ Hutchinson said goals he announced in February to lift the mask mandate, which include a positivity rate below 10%, or fewer than 750 hospitalizations, are being met and he believes the mask requirement will be lifted.

“I set some goals. And we’re making those goals. So, I expect that (mandate) to be lifted,” Hutchinson said.

Hutchinson said he believes people will continue wearing masks when social distancing is not possible or they are otherwise at risk of virus exposure.

The state’s positivity rate was 9% through Thursday, according to data from Johns Hopkins University and the Arkansas Department of Health on Sunday reported 192 people hospitalized due to the virus

— Half of U.K. adults have received one dose of COVID-19 vaccine.

— As the coronavirus made an end-of-the-year surge across New York, few nursing homes escaped unscathed. But some proved especially helpless at stopping the spread of COVID-19, despite having nine months to stockpile protective equipment and refine preventative measures.

BUCHAREST, Romania — Romania on Sunday recorded its highest number of COVID-19 patients in intensive care units since the pandemic began.

The increasing pressure on ICU wards — where today 1,334 people are currently receiving care — comes amid a surge of COVID-19 cases in the Eastern European country.

Over the past week, Romania has been recording its highest number of infections in three months — on some days more than 6,000 new daily cases.

On Saturday, health officials convened in the capital as they looked for ways to increase ICU bed capacity in order to avoid a looming shortage.

But despite the pressure on Romania’s health care system, Prime Minister Florin Citu insisted that a strict national lockdown won’t be enforced.

“A lot of people are asking if we will end up in lockdown again. My very clear answer is: NO,” Citu wrote online Saturday.

Since the coronavirus pandemic began, Romania, which has a population of more than 19 million, has recorded more than 897,000 infections, 22,208 deaths, and it has administered more than 2.4 million vaccines.

Health ministry statistics released late Saturday showed the rate of infection as more than 251 cases per 100,000 in Istanbul, the country’s largest city — up 41% since last week. That means about 40,000 new infections in Istanbul alone, which has quadrupled from numbers first released six weeks ago.

The government has divided its provinces into four risk categories and said it would evaluate restrictions at a local level every two weeks. The latest figures show many provinces turning “very high-risk” or “high risk.” Turkey’s president announced this week that relaxed restrictions, like in-restaurant dining and reduced curfews, would continue “for some more time,” but said tougher measures could be brought back.

The seven-day average of infections across the country has climbed over 18,000, hitting daily rates last seen in December. Patients in critical care and deaths are also rising. The total reported death toll in Turkey is 29,959.

NEW YORK — The first case of a COVID-19 variant known as the Brazilian variant has been confirmed in New York.

Gov. Andrew Cuomo says scientists at Mount Sinai Hospital identified the case and it was verified by the state Department of Health.

The patient is a resident of Brooklyn in their 90s who hasn’t traveled recently.

The Brazilian variant was first detected in the U.S. in January, and the Centers for Disease Control and Prevention have reported nearly 50 confirmed cases nationwide.

It has been considered to be potentially more severe than earlier variants and possibly more resistant to current vaccines, though some recent research has indicated it may not be as resistant as initially thought.

LOS ANGELES -- Students in California classrooms can sit three feet apart instead of six under new guidelines adopted by the state as school officials figure out how to reopen campuses closed for a year during the coronavirus pandemic.

The U.S. Centers for Disease Control and Prevention advises at least three feet of space between desks in most schools.

Local leaders will have the final say on distancing.

The Los Angeles Unified School District, the nation’s second largest, said it would stick with the 6-foot rule.

NEW DELHI — India has reported its highest number of coronavirus cases in four months amid a worrying surge that has prompted multiple states to return to some form of restrictions on public gathering.

The Health Ministry on Sunday reported 43,846 new cases in the past 24 hours, the worst single-day increase since mid-November.

The central Maharashtra state, home to India’s financial capital Mumbai, accounts for more than half of the new infections. The state has imposed a lockdown in some districts until the end of the month and authorities in Mumbai city said they will roll out mandatory random coronavirus tests in crowded places.

According to the ministry, seven other states have been reporting a surge in new cases from the last week, leading some to reimpose containment measures, including focused lockdowns and restaurant and school closures.

India has so far reported more than 11.5 million cases of coronavirus infection, the world’s third-highest total after the United States and Brazil. The cases had been falling steadily since a peak in late September, but experts say increased public gatherings and laxity toward public health guidance is leading to the latest surge.

The government has announced plans to inoculate 300 million people by August. But only 44 million have been vaccinated so far, 7.4 million of them partially.

Arizona’s pandemic totals rose to 835,765 cases and 16,733 deaths, according to the state’s coronavirus dashboard.

The state’s dashboard reported that the number of hospitalized COVID-19 patients occupying inpatient beds rose to 700 as of Friday, up from 686 as of Thursday, but remained far below the Jan. 11 high of 5,082.

BRAZZAVILLE, Republic of Congo — The leading opposition presidential candidate in Republic of Congo was receiving oxygen at a private hospital after being diagnosed with COVID-19, a family member said, casting Sunday’s election into doubt on the eve of the vote.

Guy Brice Parfait Kolelas, 61, had skipped his final campaign event on Friday after telling some reporters a day earlier that he feared he had malaria. A relative who spoke on condition of anonymity due to the sensitivity of the matter said plans were underway for Kolelas to be evacuated abroad for further treatment.

A video circulating on social media dated Friday showed Kolelas wearing an oxygen mask and with a blood pressure cuff on his arm as he lay in a hospital bed.

“My dear compatriots, I am in trouble. I am fighting death,” the candidate says in a weak-sounding voice after removing his oxygen mask. “However, I ask you to stand up and vote for change. I would not have fought for nothing.”

LONDON — The U.K. says half of the country’s adults have received at least one dose of COVID-19 vaccine.

The National Health Service has put shots in the arms of 26.9 million people, or 51% of the adult population, according to the latest government statistics. The NHS passed the halfway point on Friday by delivering 589,689 doses.

The celebration comes amid growing concerns about the failure of wealthy countries to share scarce vaccine supplies with developing nations. The director of a London-based health policy think tank says while Britain should be proud of the success of its vaccination drive, it’s time to start thinking about the rest of the world. Dr. Jeremy Farrar, director of Wellcome, says the country has the rights to enough doses to vaccinate its entire population twice.

He says ensuring the world is vaccinated is a scientific and economic imperative: “Science has given us the exit strategy, but it will only work if its benefits can reach the maximum number of people around the world.”

SANTIAGO, Chile — Chile has reported its highest daily count of 7,084 coronavirus infections since the start of the pandemic despite widespread restrictions and progress on vaccinations.

The government on Saturday reported cases topping the previous record in June. It says coronavirus has become the country’s leading cause of mortality, causing 26% of deaths this year.

Chile has given at least one vaccine shot to more than 29% of the population and both doses to 15% — far more than in other nations in the region. But Health Minister Enrique Paris says people should remain cautious since population-level immunity isn’t likely until about 80% are vaccinated, probably by the end of June.

Officials say hospital bed usage has reached 94%, with rising numbers among those below 60 as older Chileans have been inoculated.

The government has imposed restrictions on three quarters of the country’s municipalities. Officials say Saturday they are tightening limits on people entering from abroad, especially from Brazil.

Health officials say the state’s role in determining COVID-19 restrictions will lessen in favor of more local control as vaccination eligibility is extended.

For the majority of the state, masks will be required for indoor public places with 10 or more people, and the capacity restrictions remain in place.

The proposal would allow local authorities and “private entities” in the counties with the lowest coronavirus infection rates to determine whether masks would be required. It would end most restrictions on capacity for restaurants, retailers and outdoor events.

There are currently only two Level Green counties where this applies — the rural Crowley and Otero counties in southern Colorado — which means they have fewer than 15 cases per 100,000 people in a week.

Most of the state is in the next risk level up, while the Denver metro area is two levels higher than the least restrictive designation.

Health Minister Adam Niedzielski blamed the increase on the British variant of the virus, which he described as “extremely infectious and vicious.” He urged Poles to observe restrictions that were reintroduced Saturday, closing hotels, shopping malls, theaters, galleries and sports centers.

Poland’s authorities have urged people to get vaccinated, saying they’re speeding up registration of more age groups for the inoculation. They use Pfizer, Moderna and AstraZeneca vaccines.

Unlike many European countries, Poland never discontinued using the AstraZeneca vaccine, insisting it was medically approved and safe. However, many Poles were not turning up for their AstraZeneca inoculation and authorities blamed that on “panic” in other countries.

So far, more than 5 million doses of various COVID-19 vaccines, including some 1.8 million second doses, have been administered in the nation of 38 million.

ZAGREB, Croatia — Several thousand people in Croatia, Serbia and Montenegro rallied against anti-virus measures on Saturday, despite a rise in daily infections in the past weeks.

Protests in Croatia were held in the capital Zagreb and several smaller towns. Local media say participants refused to wear face masks or keep distance among themselves. while holding banners reading “Enough tyranny,” or “Give us back the flu.”

In Belgrade, the capital of Serbia, several hundred people protested after the Serbian government kept bars, restaurants and non-essential shops and businesses closed this week.

The state Montenegrin RTCG television reported about one hundred people came out in the rain to protest anti-virus rules. The report says that police urged them to respect distancing.