The Latest: Barrett: Court should interpret laws as written 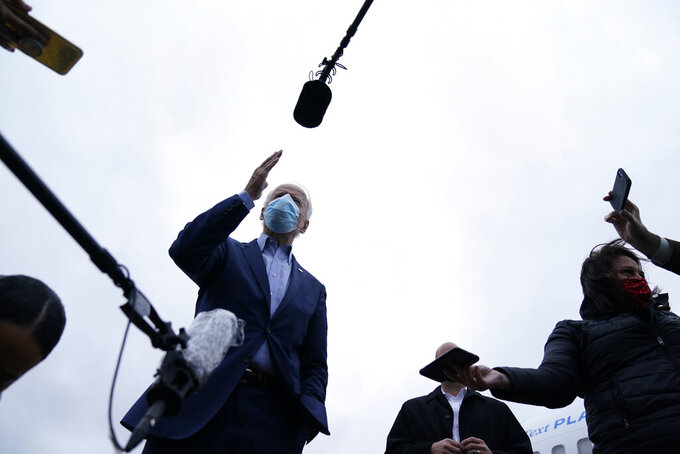 Supreme Court nominee Amy Coney Barrett says she believes the court should interpret the U.S. Constitution and laws “as they are written.”

Barrett said in her opening statement Monday at her confirmation hearing before the Senate Judiciary committee that people of all backgrounds deserve “an independent Supreme Court.”

She says: “And I believe I can serve my country by playing that role.”

President Donald Trump nominated Barrett just two weeks ago to fill the seat of the late Ruth Bader Ginsburg, who died Sept. 18. Trump and Republicans want Barrett on the bench in time for Election Day, Nov. 3.

Barrett, a conservative, would shift the balance on the court significantly right, from 5-4 in favor of conservatives to 6-3. Democrats worry she would vote to rule the Affordable Care Act is unconstitutional in a case coming before the court in November.

HERE’S WHAT YOU NEED TO KNOW ABOUT WHAT’S HAPPENING IN THE SUPREME COURT CONFIRMATION HEARINGS:

The Republican-controlled Senate is charging ahead on President Donald Trump’s pick to replace the late Justice Ruth Bader Ginsburg and cement a conservative court majority before Election Day.

— Graham, Harris, Feinstein among the senators to watch at Barrett's hearings.

Amy Coney Barrett is addressing senators at her Supreme Court confirmation hearing, saying she is humbled by the profound responsibility of being nominated to fill the vacancy left by the death of Ruth Bader Ginsburg.

Barrett addressed a sparsely populated room Monday as some senators on the Judiciary Committee chose to attend virtually as the Capitol manages a COVID-19 outbreak.

Barrett took off her mask to speak but kept it on for the hours of opening statements from the committee during the day.

She will be questioned by senators though her nomination is largely expected to pass. Democrats say they are concerned she will overturn the Obama-era Affordable Care Act. They say GOP lawmakers are rushing the nomination through to get her on the bench before Election Day, Nov. 3.

California Sen. Kamala Harris says Republicans are trying to get the Supreme Court to do their “dirty work” by installing a new justice who will overturn the Affordable Care Act.

Harris delivered her opening remarks via video Monday from her Senate office, calling the hearings “reckless” because everyone attending was not required to be tested for the coronavirus.

She warned it’s not just health care that is at risk if Amy Coney Barrett is confirmed. She says voting rights, workers’ rights, abortion rights and the very idea of equal justice are at stake.

Harris says that the court is “often the last refuge for equal justice” and that a Barrett nomination puts in jeopardy everything the late Justice Ruth Bader Ginsburg fought to protect.

Harris’ comments largely mirrored her messaging on the campaign trail as the Democratic vice presidential nominee. She and Joe Biden have made protecting the Affordable Care Act one of the centerpieces of their campaign.

Sen. Mike Lee has released a doctor’s letter saying he no longer needs to be in isolation for COVID-19, allowing him to join the confirmation hearings for Supreme Court nominee Amy Coney Barrett.

The Utah Republican posted the letter from the Attending Physician of Congress, Dr. Brian Monahan, on Monday as he joined the Senate Judiciary Committee for hearings.

The letter says, “Based on current CDC guidelines, you have met criteria to end COVID-19 isolation for those with mild to moderate disease.”

The doctor says Lee reported “remaining but improving fatigue” but has had no fever for at least 24 hours. He says Lee reported on Sunday that “other symptoms have improved.” The letter notes it has been more than 10 days “since symptom onset.”

Lee and Sen. Thom Tillis of North Carolina are among those who tested positive for the virus Oct. 2 after attending the Sept. 26 Rose Garden event announcing President Donald Trump’s nomination of Barrett.

The Connecticut senator says Barrett’s participation in election cases would do “explosive, enduring harm to the court’s legitimacy” and to her credibility.

Blumenthal told Trump’s nominee on Monday: “You must recuse yourself.”

Democrats are warning Republicans that the American public is not on their side rushing Trump’s nominee to confirmation while early voting is underway. Democrats say the winner of the presidential election should choose the nominee for the seat made vacant by the death of Justice Ruth Bader Ginsberg.

In a letter to the Senate Judiciary Committee, the association says it has completed its evaluation of the professional qualifications of President Donald Trump’s choice to replace the late Justice Ruth Bader Ginsberg.

The letter says a majority of the ABA’s Standing Committee on the Federal Judiciary determined that Barrett is “Well Qualified.” A minority is of the opinion Barrett is “Qualified” to serve.

The group says its evaluation is based on “the qualities of integrity, professional competence, and judicial temperament.”

Whitehouse and other Democrats argued Monday at Barrett’s confirmation hearing that the Affordable Care Act is at serious risk if Barrett is confirmed to the high court. The court is set to hear a major challenge to the law on Nov. 10, a week after the presidential election.

Whitehouse says the nation is in the midst of a “relentless” health care crisis that the Trump administration has “botched.” He notes former Supreme Court Justice Ruth Bader Ginsburg “hadn’t been buried when the president and Senate Republicans celebrated Barrett’s nomination at the White House super-spreader event,” when a number of White House aides and others were likely infected with the coronavirus.

Whitehouse says Barrett “has signaled in the judicial equivalent of all-caps that she believes the ACA must go.″

Biden is also a practicing Catholic. He told reporters ahead of a campaign trip to Ohio on Monday he doesn’t think “there’s any question about her faith.”

Biden says the more important matter is that “this nominee says she wants to get rid of the Affordable Care Act.”

Before Barrett was a federal judge, she questioned the reasoning behind Chief Justice John Roberts’ majority opinion upholding the 2010 health care law. The law is being challenged again, with oral arguments set for Nov. 10, a week after the election.

Republicans have accused Democrats of questioning Barrett’s faith and whether it would affect her decisions. Republicans want Barrett confirmed before the election.

Democratic vice presidential nominee and Sen. Kamala Harris is criticizing Republicans for trying to “ram through” Supreme Court nominee Amy Coney Barrett while Americans are voting in the presidential election.

The California senator said on Monday that running mate Joe Biden has “been really clear” and she has been “really clear.” She tells reporters on Capitol Hill, “We are 22 days away from an election, and people are voting right now.”

Harris says Republicans are “trying to push through, ram through, a Supreme Court justice for a lifetime appointment while almost 7 million people have already voted.”

Harris is a member of the Senate Judiciary Committee but will be attending the hearing remotely because of COVID-19 concerns.

Republicans are pushing to confirm Barrett before Election Day.

California Sen. Dianne Feinstein says “healthcare coverage for millions of Americans is at stake” in the nomination of Judge Amy Coney Barrett to the Supreme Court.

Feinstein was speaking Monday during the start of hearings for Barrett before the Senate Judiciary Committee. Feinstein, the top Democrat on the panel, says the president has promised to appoint justices who will vote to undo the Obama-era Affordable Care Act. The Trump administration is challenging the law in a case that will be heard by the Supreme Court on Nov. 10.

Feinstein and Democrats are expected to focus on healthcare during the hearings. Feinstein still faces criticism for her comments during Barrett’s 2017 confirmation hearing to be a federal judge. Feinstein had joined Republicans on the panel in asking Barrett about her Roman Catholic faith, but then went further by telling Barrett, then a Notre Dame law professor, that “when you read your speeches, the conclusion one draws is that the dogma lives loudly within you.″

Republicans are pushing to confirm Barrett before Election Day.

Senate Judiciary Chairman Lindsey Graham says Judge Amy Coney Barrett is in a “category of excellence” as a law professor and legal scholar.

Graham, R-S.C., praised Barrett as he opened Supreme Court confirmation hearing before the Republican-led panel. Barring a dramatic development, Republicans appear to have the votes to confirm the 48-year-old conservative appellate judge to a lifetime seat on the Supreme Court.

Graham acknowledged “the COVID problem in America is real,″ but said, “We do have a country that needs to move forward safely.” Barrett was wearing a face mask, as were all the roughly 100 people in the cavernous hearing room.

Graham cited Barrett’s testimony that she follows the judicial philosophy of the late Justice Antonin Scalia, for whom she clerked two decades ago. He called that a good summary of “who Amy Barrett is in terms of the law.″

Graham acknowledged the hearings are likely to be contentious, but said he hopes they do replicate the divisive hearings for Justice Brett Kavanaugh. “She doesn’t deserve that,″ Graham said. ”The American people I don’t believe deserve a repeat of those episodes.”

A Utah Republican senator who had tested positive for the coronavirus says “I feel great” and is attending hearings in person for Supreme Court nominee Amy Coney Barrett.

Sen. Michael Lee was present for the start of Senate Judiciary Committee hearings Monday for Barrett. He was wearing a blue surgical mask.

Conn Carroll, a spokesman for Lee, had previously said the senator is symptom-free.

Lee and another member of the committee, Sen. Thom Tillis of North Carolina, both announced Oct. 2 that they had tested positive for the virus. Both attended a Sept. 26 Rose Garden ceremony in Barrett’s honor that seems to have been a major spreader of the virus.

Senate Judiciary Committee Chairman Lindsey Graham opened the hearing by defending holding the hearing so close to the presidential election. And he noted the likely outcome of the confirmation process. “All Republicans will vote yes. All Democrats will vote no.”

The hearing room was largely empty Monday and some senators tuned in virtually, citing the coronavirus.

President Donald Trump nominated Barrett just two weeks ago to fill the seat of the late Ruth Bader Ginsburg, who died Sept. 18. Trump and Republicans want Barrett on the bench in time for Election Day, Nov. 3.

The hearing comes as three GOP senators have tested positive for the coronavirus, including two on the Judiciary Committee who now say they are symptom-free. The positive tests came after Trump’s Sept. 26 Rose Garden event announcing Barrett’s nomination. Trump fell ill with COVID-19 about 10 days ago.

Barrett, a conservative, would shift the balance on the court significantly right, from 5-4 in favor of conservatives to 6-3. Democrats worry she would vote to rule the Affordable Care Act is unconstitutional. They’re also concerned about her record on abortion.

She was confirmed to the federal appeals court in 2017. Before that, she was a law professor at Notre Dame and was once a clerk for Justice Antonin Scalia.