The Latest: Biden doesn't want events to be `superspreaders' 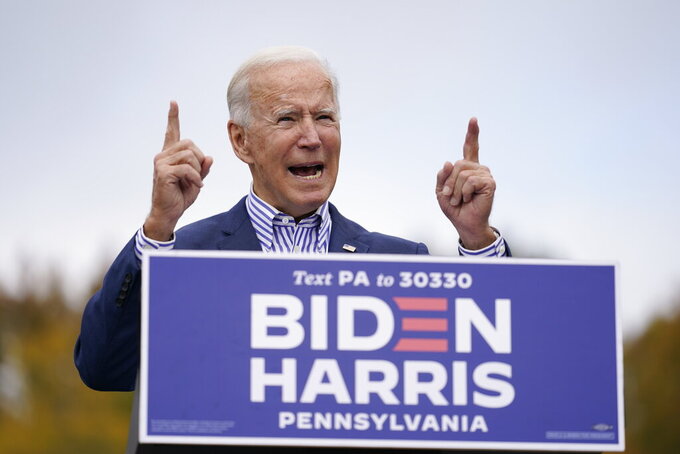 Joe Biden tells supporters in Pennsylvania that he misses up-close campaigning, but doesn't want his events to “superspreaders.” That's a barb seemingly aimed at President Donald Trump, who's set to hold a trio of big rallies later Saturday at a time of rising coronavirus cases.

At a drive-by rally in the Philadelphia suburb of Bristol, Biden said: “I don't like the idea of all this distance, but it’s necessary.”

He added, "We don’t want to become superspreaders.”

Trump's events in North Carolina, Ohio and Wisconsin come as the U.S. has hit a daily record of coronavirus cases with more than 83,000 reported infections. The U.S. death toll has grown to nearly 224,00, according to the tally published by Johns Hopkins University. The total U.S. caseload reported Friday was 83,757, topping the 77,362 cases reported on July 16.

Trump said in a tweet said the rise in positive cases is overblown.

A Rose Garden event in late September has been labeled a “superspreader” for the virus. More than two dozen people linked to the White House have contracted COVID-19 since the president’s Sept. 26 event announcing Amy Coney Barrett as his nominee to the Supreme Court.

President Donald Trump and his Democratic challenger, Joe Biden, are framing their closing messages in the sprint to the Nov. 3 election. Trump voted Saturday in Florida before rallies in North Carolina, Ohio and Wisconsin. Biden has events in Pennsylvania.

— As Trump casts doubt on election, new agency contradicts him

— The Needle goes away as probability experts assess 2020 race

— Four years in, Trump has plenty of unfinished business

President Donald Trump has cast his ballot Saturday morning in West Palm Beach, Florida, and he tells reporters afterward: “I voted for a guy named Trump.”

West Palm Beach is near his private Mar-a-Lago club. He used to vote in New York but changed his residency to Florida last year.

There were several hundred supporters gathered with flags and signs outside the library where he voted. And there were chants of “Four more years.”

The president wore a mask while voting but he took it off as he approached reporters afterward in the building.

He called it “a very secure vote. Much more secure than when you send in a ballot, I can tell you that.”

Democrat Joe Biden hasn’t voted yet and it likely to do so in person in Delaware on Election Day, Nov. 3. Delaware doesn’t offer early, in-person voting like Florida.

Trump said at a Florida rally on Friday that he likes being able to vote in person. “I’m old fashioned, I guess,” he said.

The president has a busy Saturday, with rallies scheduled in North Carolina, Ohio and Wisconsin.

Joe Biden is holding two drive-in rallies in all-important Pennsylvania on Saturday as he works to shore up support in his native state.

The Democratic presidential nominee is a Scranton native. He’s set to campaign in Bucks County, southeast of Allentown, which voted narrowly Democratic in 2016.

The former vice president angered some oil industry advocacy groups by suggesting during this week’s presidential debate that the U.S. will have to transition away from fossil fuels eventually if it is going to get serious about climate change.

Biden says that process would be very gradual and that he has a post-coronavirus pandemic economic plan that can create “millions” of new jobs by retrofitting key infrastructure to be more environmentally friendly.

Jon Bon Jovi is set to perform at Biden’s drive-in rally in Luzerne County. His appearance is reminding some of Election Day eve in 2016, when he was part of a huge outdoor concert with the Obamas and then-Democratic nominee Hillary Clinton in Philadelphia. That event came mere hours before Clinton lost to Donald Trump.

Joe Biden says climate change is “the No. 1 issue facing humanity” but he's pledging to protect energy industry jobs that could amid federal efforts to combat it.

The Democratic presidential nominee is campaigning Saturday in Pennsylvania, where parts of the state are heavily dependent on the energy sector. Biden has faced criticism from some in the oil industry for suggesting during this week’s debate that the U.S. would have to transition away from fossil fuels eventually for environmental reasons.

Here's what Biden said about climate change during an episode of “Pod Save America” that was released Saturday: “Unchecked, it is going to actually bake this planet.”

He added: “We cannot discount the concerns of people, what it means for their well-being and not only in the future and now, but what about how they make a living?”

Biden noted on the podcast that some unions have endorsed his economic plan to retrofit infrastructure to make it more environmentally friendly. He said that can create “millions” of new, green jobs.