The Latest: Biden, Pence set to get COVID-19 vaccine soon 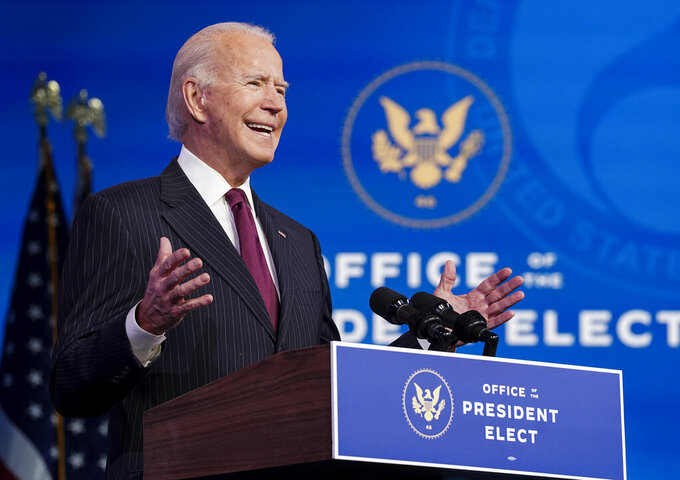 According to two transition officials familiar with the matter, Biden will receive the vaccine publicly as early as next week. The officials spoke on condition of anonymity because they weren't authorized to discuss it publicly.

The White House says Pence and his wife, Karen, will receive the vaccine publicly on Friday.

Biden said on Tuesday that Dr. Anthony Fauci, the nation’s top infectious-disease expert, advised him to get the vaccine “sooner than later.” Biden has said that he wants to keep front-line health care workers and vulnerable people as the top priority as the vaccine is rolled out throughout the country.

But he’s also noted the importance of him getting the vaccine publicly to build confidence among Americans to get vaccinated.

Biden said, “I don’t want to get ahead of the line, but I want to make sure we demonstrate to the American people that it is safe to take."

President-elect Joe Biden has tapped former presidential rival Pete Buttigieg as his nominee for transportation secretary, adding a youthful voice to an incoming administration so far dominated by people with decades of Washington experience.

President-elect Joe Biden has told governors from more than 30 states that the federal government needs to “get its act together” amid a surge in coronavirus infections and deaths.

Biden made the comments in a Wednesday afternoon Zoom call with the bipartisan group of state leaders. He said his administration would seek to partner closely with state governments once he takes office on Jan. 20.

Without mentioning President Donald Trump by name, Biden said the governors had often been negotiating through the crisis with “very little help.” He promised the governors that his team would look to them for their input on what in the federal-state coordination has worked and where they need more help.

Pelosi’s statement Wednesday opens the door for Biden to choose Haaland, a front-runner for the post. Backers say her potential history-making nomination as the first Native American to serve in a Cabinet would excite Americans and energize progressive Democrats.

The speaker called the New Mexico congresswoman “one of the most respected and one of the best members of Congress” with whom she has served.

Haaland is one of the first two Native American women elected to Congress, part of the 2018 midterm election wave that delivered Democrats majority control. She chairs the Natural Resources Subcommittee on National Parks, Forests and Public Lands.

The Democratic majority in the new Congress could be as tight as 222 to 213, the narrowest partisan gap in the House in two decades. A couple of races have yet to be called.

Transportation secretary nominee Pete Buttigieg, who will be the first openly gay person to serve in a Cabinet, on Wednesday tipped his hat to a Bill Clinton-era ambassadorial nominee whose nomination was blocked by Senate Republicans because of his sexuality.

Buttigieg, who was 17 at the time but not yet out, recalled following the news of the fight over Hormel’s nomination and being struck by “some of the limits that exist in this country.”

“So two decades later, I can’t help but think of a 17-year-old somewhere who might be watching us right now,” Buttigieg said. “And I’m thinking about the message that today’s announcement is sending to them.”

President-elect Joe Biden says his Cabinet will be more representative of the American people than any other in U.S. history.

Biden championed the diversity of his Cabinet nominees on Wednesday in Wilmington, Delaware, as he announced that he has chosen Pete Buttigieg as transportation secretary. If confirmed, Buttigieg would be the first openly gay person to lead a Cabinet department and one of the youngest members ever.

Buttigieg is a former mayor of South Bend, Indiana, and a former presidential candidate.

Biden says there will be more people of color and more women in his Cabinet than any other before, including the first Black defense secretary and the first Latino to head the Department of Health and Human Services.