The Latest: Bidens to have Sunday tea with the queen 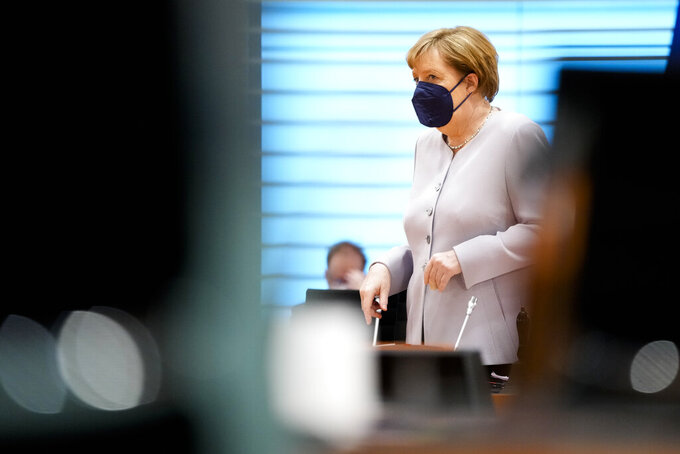 PLYMOUTH, England (AP) — The Latest on the Group of Seven nations meeting being held in England and the meetings Thursday between British Prime Minister Boris Johnson and President Joe Biden.

LONDON — President Joe Biden will be welcomed with a military Guard of Honor and afternoon tea with Queen Elizabeth II at Windsor Castle when he meets the monarch on Sunday.

The queen will host the president and First Lady Jill Biden in her royal residence on Sunday, after the couple leaves the Group of Seven summit in Cornwall, southwestern England.

The monarch will greet the Bidens in the castle’s quadrangle, where assembled soldiers from the Queen’s Company First Battalion Grenadier Guards will give a royal salute and the U.S. national anthem will be played.

The president will then be invited to inspect the Honor Guard and watch the military march-past with the queen.

Biden will be the 13th American leader to meet the monarch, with Lyndon B. Johnson the only one the queen has not met. She has received four other U.S. presidents at Windsor Castle: President Donald Trump in 2018; Barack Obama in 2016; George W. Bush in 2008; and Ronald Reagan in 1982.

BERLIN — Germany is sticking to its opposition to easing patent protection on COVID-19 vaccines as it goes into the Group of Seven summit.

While many developed countries with strong pharmaceutical industries hesitated or were outright opposed to the idea, the debate received a jolt last month when the Biden administration announced support for granting waivers for vaccines.

But a senior German official, who briefed reporters on condition of anonymity in line with department rules, said Thursday: “We don’t think a waiver is helpful or is actually the problem, and nothing has changed about that.”

The official noted that talks are ongoing at the World Trade Organization in Geneva and said they may achieve “improvements within the system.”

Asked whether Germany plans to announce to give more vaccine to poorer countries after the U.S. unveils plans to donate 500 million doses around the globe, the official said Germany has done “a great deal” on three tracks: sharing doses, financing purchases via the COVAX program, and exports.

Chancellor Angela Merkel said last month that Germany is prepared to donate 30 million doses by the year’s end to poorer countries “assuming, of course, that the vaccines we have ordered actually arrive.” That would be part of a broader donation of 100 million doses by the European Union.

Germany hasn’t said when the donations will start.

BERLIN — Germany sees one big message from this year’s Group of Seven summit: multilateralism is back.

Chancellor Angela Merkel, who is attending her last G-7 summit after nearly 16 years in power, has been a leading advocate of taking a multilateral approach to world affairs — in contrast to the administration of former U.S. President Donald Trump.

Asked what message Merkel wants to send at the summit, a senior German official replied: “The message of the summit overall — and that stands for what the chancellor has stood for over recent years — is that multilaterism, and the G-7, is back.”

The official, who said that there has been much common ground in pre-summit negotiations, stressed that issues such as climate change, the pandemic and many others can only be solved together.

The official spoke on condition of anonymity in line with department rules.

LONDON — U.K. Prime Minister Boris Johnson is being criticized for flying to the Group of Seven summit meeting in Cornwall, rather than taking the train, as he presses world leaders to do more to fight global warming.

Environmental activists bombarded Johnson’s Twitter feed with suggestions that the prime minister should practice what he preaches after he posted a photo of himself climbing off the plane accompanied by a call to make the world “better, fairer and greener.”

“This is how serious Boris Johnson is about combating the climate emergency: He flew to Cornwall,” Zarah Sultana, a lawmaker from the opposition Labour Party, tweeted in response.

According to figures posted on the U.K. government website, domestic flights generate about six times more greenhouse gases than rail travel. A train journey to Cornwall takes about five hours, compared with less than 90 minutes for a flight.

Johnson is hosting leaders from the world’s seven richest democracies during this weekend’s summit at the Carbis Bay resort in Cornwall. The agenda includes talks on climate change, the global response to COVID-19 and the taxation of multinational corporations.

LONDON — British Prime Minister Boris Johnson says the nations of the world must set aside the “beggar my neighbor” attitude that led to squabbling over medicines and treatments for COVID-19.

Johnson said Thursday that Group of Seven leaders meeting this weekend in Carbis Bay, southwest England, will commit to vaccinating the world by the end of 2022.

The British leader wrote in The Times of London that it was time for wealthy countries should “shoulder their responsibilities and to vaccinate the world.”

But he faces criticism because the U.K. has yet to send any doses abroad and has cut its international aid budget, citing the economic blow of the pandemic.

Johnson said Thursday that Britain would donate “millions” of doses from surplus stocks -- though he didn’t say when.

Johnson also noted that the British government helped fund the development at Oxford University of the AstraZeneca vaccine, which accounts for 1 in 3 vaccine doses around the world.

President Joe Biden is announcing Thursday that the U.S. will buy 500 million more doses of the Pfizer vaccine to share with poorer countries over the next year.

BRUSSELS — Top European Union officials are joining calls to investigate the origins of the COVID-19 pandemic, ramping up the pressure on China to be more open about the virus, ahead of the Group of Seven summit.

European Commission President Ursula von der Leyen said Thursday that “we have to know where it did come from in order to draw the right lessons and to develop the right tools to make sure that this will never happen again.”

Von der Leyen says “the investigators need complete access to whatever is necessary to really find the source of this pandemic.” She said Europe had responded reasonably well to the heavy economic impact of virus restrictions because it had drawn the right lessons from the 2008 financial crisis.

European Council President Charles Michel says “the world has the right to know exactly what happened.”

Last month, President Joe Biden ordered U.S. intelligence officials to “redouble” their efforts to investigate the origins of the coronavirus, including any possibility the trail might lead to a Chinese laboratory.