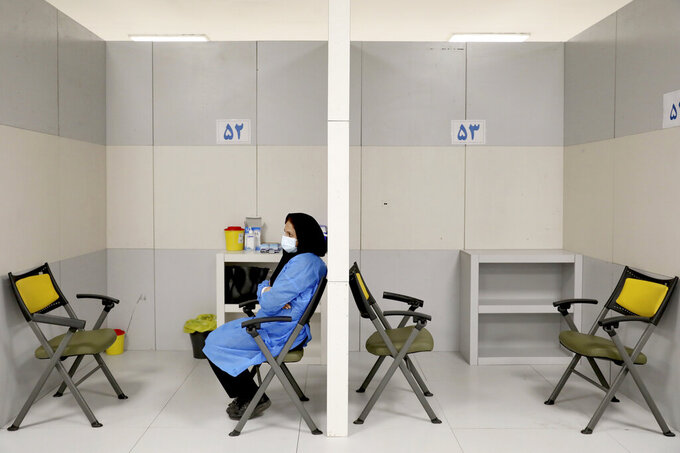 HARTFORD, Conn. — As some states set plans to a pandemic $300 weekly supplemental unemployment benefit as a way to encourage people to find work, Connecticut is offering a much different incentive — a $1,000 signing bonus for taking a job.

Starting May 24, up to 10,000 people in Connecticut considered to have been unemployed for the “long-term” will be able to sign up for the program with the state Department of Labor. Ultimately, they would be paid the bonus after spending eight weeks in their new full-time job.

Connecticut Gov. Ned Lamont said Monday that the state will also retain the $300 benefit before some people are still afraid to work because of the coronavirus.

— A dip in cases is bringing a glimmer of hope in India, but shortage of beds, oxygen show virus crisis isn't over yet

— Eurovision song contest gears up in Rotterdam for 1st time since the pandemic began, hopes virus bubbles will ensure safety

WASHINGTON — The Biden Administration is putting a fresh wave of funding toward its stated goal of making a serious dent in homelessness across the country.

Despite a wave of public support and a nationwide eviction moratorium, Housing Secretary Marcia Fudge said as many of 580,000 people experienced homelessness in the middle of the pandemic.

Fudge, who heads the Department of Housing and Urban Development, said Monday that an extra $5 billion would be allocated toward keeping families off the streets. That’s in addition to the $5 billion in funds for preventing homelessness previously announced as part of the American Rescue Plan.

The aid will come in the form of 17,000 emergency housing vouchers that will be distributed to housing authorities across the country. Fudge said the vouchers were expected to help provide shelter for up to 130,000 people and called the new money, “an important milestone in our effort to end homelessness in the United States.”

WARSAW, Poland — Poland-based molecular diagnostics firm Genomtec says it has registered for use in European Union a pioneer, high-reliability COVID-19 test from saliva.

The test, Genomtec SARS-CoV-2 EvaGreen Direct-RT-LAMP CE-IVD Kit spares those tested the discomfort of having swabs pushed up their noses and down their throats. Instead, they only need to produce a sample of saliva in a small test tube, Genomtec, a Polish-British firm, said Monday.

The result is obtained within one hour, because the technology does not require special preparatory procedures on the sample. Its reliability is pegged at over 92%, according to the Genomtec. The test detects various mutations of the coronavirus, said the company that is listed on the Warsaw’s Stock Exchange NewConnect market.,

Genomtec said the test has been registered and approved for use in the European Union by Poland’s Office of Medicinal Products, Medical Devices and Biocidal Products. First tests on the general public using the kit will be done still this month in Wroclaw, southwestern Poland, where Genomtec is based.

PRAGUE — The Czech government has announced a new wave of easing coronavirus restrictions amid falling numbers of infected people.

Starting May 24, all hotels are allowed to return to business. The guests will need to present a negative coronavirus test or be vaccinated or recover from COVID-19. If they want to stay longer than seven days, an additional test will be required.

At the same time, all elementary schools and high schools will fully reopen. Schoolchildren and students will be tested once a week.

The same applies for universities where, however, the spring term in many cases ends next week.

It will be also possible for up to 1,000 people to attend outdoor cultural events, while up to 500 are allowed at such events indoor.

Monday’s announcement comes on the day when Czech bars and restaurants are reopening for outdoor dining.

The number of people infected per 100,000 inhabitants in last seven days has dropped to 71 in the Czech Republic.

BERLIN — Germany’s health minister says the country will open up coronavirus vaccinations to everyone starting on June 7. Health Minister Jens Spahn told reporters on Monday that the current system of prioritization in which the most vulnerable groups are to be vaccinated first will no longer be valid then.

The minister said, “this does not mean that everyone will get an appointment within days, but ... everyone who wants to get vaccinated will get an offer.”

Spahn said that the vaccination campaign has picked up speed in recent weeks and that by the end of May about 40 percent of all people in Germany will have received at least one shot. He said 70 percent of those above the age of 60 have received one shot, about one-quarter of them are fully vaccinated. All in all, 40 million doses of coronavirus vaccines have been given and around nine million people are fully vaccinated, in this country of 83 million.

After months of lockdown, the infection rate has been dropping in Germany and some states are slowly starting to open up outdoor dining and various shopping possibilities.

The governor said the state is adopting the guidance from the Centers for Disease Control and Prevention released last week.

“Let’s get back to life,” Cuomo said. “If you are vaccinated, you are safe, no masks, no social distancing.”

Cuomo urged people who are unvaccinated and immunocompromised to continue to wear a mask and social distance.

State health officer Nizar Wehbi says the department is aligning with U.S. Centers for Disease Control and Prevention that fully vaccinated individuals can resume activities without wearing a mask indoors and outdoors.

Individuals are considered fully vaccinated two weeks after the second dose of Pfizer or Moderna vaccines or two weeks after a single dose of the Johnson & Johnson vaccine.

Jury draws were planned Monday for a number of cases in Windham County criminal court. Among them are cases involving drug crimes. According to court documents, social distancing and masking will be part of the proceedings.

Vermont Chief Superior Judge Brian Grearson told the Brattleboro Reformer that the judiciary picked cases that were not very complicated, meaning they did not involve a large number of witnesses and could be tried within a couple of days because of the virus-related protocols.

An upgrade to the building’s heating, ventilation and air-conditioning system for proper airflow could lead to fluctuating temperatures, according to a court flyer sent to jurors.

The trial arrangements were planned in consultation with an infectious disease expert to comply with virus guidelines from the Centers for Disease Control and Prevention and the Vermont Health Department, the newspaper reported.

GENEVA — The head of the World Health Organization is calling on some of the world’s top COVID-19 vaccine makers to do more to get doses to needy people around the world, especially in the developing world -- and more quickly.

WHO Director-General Tedros Adhanom Ghebreyesus appealed in particular to U.S.-based Moderna to accelerate its planned timetable for doses of its vaccine to be available to the U.N.-backed COVAX program, which aims to get vaccines to low- and middle-income countries.

“Moderna has signed a deal for 500 million doses with COVAX, but the majority has been promised only for 2021,” Tedros said Monday. “We need Moderna to bring hundreds of millions of this forward into 2021 due to the acute moment of this pandemic.”

The WHO chief also said COVAX was working toward a deal with U.S.-based Johnson & Johnson that could get doses to the program by the second half of this year, “but this has not been finalized and we do not know when they will arrive.”

Tedros said “we appreciate the work of AstraZeneca” — the British-Swedish manufacturer that has been the main pillar so far of COVAX and the source of the vast majority of doses in the program that has now deployed some 65 million doses.

U.S.-based Pfizer, along with German partner BioNTech, has committed to 40 million doses this year to COVAX, “but the majority of this would be in the second half of 2021,” he said.

Tedros cited figures from UNICEF, which is helping the deployment, that COVAX is facing a “huge shortfall” of 190 million doses in its planned rollout because of tight supplies and a surge in cases.

TORONTO — All adults in Canada’s most populous province will be eligible to book a COVID-19 vaccine starting Tuesday.

The Ontario government says those turning 18 this year will be allowed to book shots. The provincial government had initially said it would lower the vaccine eligibility age to 30 this week.

The province will also now send shots to regions on a per-capita basis, after two weeks of sending half the vaccine supply to COVID-19 hot spots.

Canada expects to get 3.5 million Pfizer and Moderna vaccines this week. More than 55% of the population in Ontario aged 18 and over have received at least one dose.

AMSTERDAM — The European medicines regulator says it is safe to store thawed Pfizer vaccines in a regular fridge for up to 31 days, a ruling that will make handling the vaccine easier around the European Union.

The European Medicines Agency said Monday that its human medicines committee has recommended changing the storage guidelines for unopened, thawed vials of the Pfizer vaccine from five days to a month at normal fridge temperatures after they have been taken out of deep freeze.

The change came after Pfizer and BioNTech submitted “additional stability study data” to the Amsterdam-based agency.

The European Union agreed a massive contract extension for the Pfizer-BioNTech vaccine this month for a potential 1.8 billion doses through 2023.

Italy’s national statistics agency issued a comprehensive report Monday on the requests for help last year to the hotline and shelters.

The report said the number of calls to the toll-free 1522 number and related texting option hit a peak in April and May, during the first wave of COVID-19, which hit Italy first in Europe. Another peak came around Nov. 25.

ISTAT said the data confirmed it was accurate to speak of a “double pandemic” — one that was epidemiological and one fueled by domestic violence.

NEW YORK — Target and CVS are the latest retailers to no longer require vaccinated shoppers to wear a mask in its stores. Target’s said vaccinated workers can also stop wearing masks, but at CVS, the company said workers will be required to wear them even if they’ve been inoculated.

The announcements come after the Centers for Disease Control and Prevention eased mask-wearing guidance for fully vaccinated people last week, allowing them to stop wearing masks outdoors in crowds and in most indoor settings. On Friday, Walmart, Costco and several other large retailers said that those who have been vaccinated don’t need to wear masks.

Target and CVS said Monday that they will still recommend those who aren’t vaccinated to wear masks in its stores. Target said it is offering paid time off to workers to get a COVID-19 vaccine.