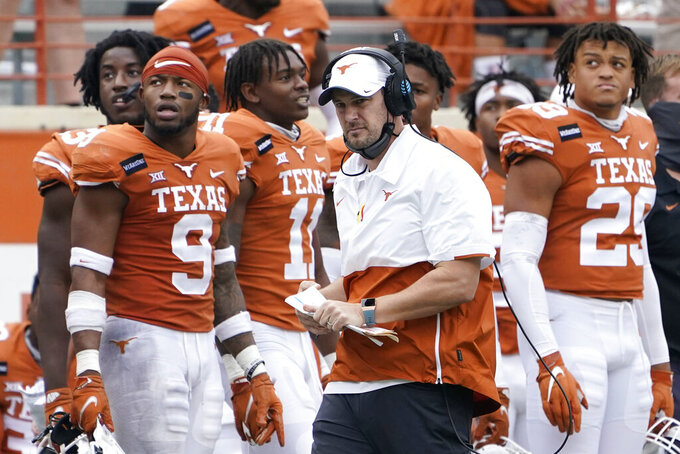 FILE - In this Friday, Nov. 27, 2020, file photo, Texas head coach Tom Herman, center, walks on the sideline during the second half of an NCAA college football game against Iowa State in Austin, Texas. Herman batted away questions about his future with the program on Monday, Nov. 30, 2020, and insisted on trying to keep the focus on the Longhorns' players trying to win their last two games of the season. (AP Photo/Eric Gay, File)

The DePaul at Iowa State men’s basketball game scheduled for Sunday has been canceled under guidelines for COVID-19 protocols in the Blue Demons' program.

DePaul has yet to play this season. It has had five games either canceled or postponed.

The Blue Demons' next scheduled game is set for Friday at Seton Hall.

Texas said all football team activities have been paused after three players and two staff members tested positive for the coronavirus Sunday after getting home from a win at Kansas State.

The players and staff were not identified. Texas said all of them tested negative on Friday and went to the game. They tested positive after the team returned home. All will be tested again Monday and Tuesday before the program will determine when team activities can resume.

The Portland Trail Blazers have closed their facility for deep cleaning after three positive COVID-19 tests came back in a span of four days.

Sunday was to have been the first full day of training camp for the Blazers. They, along with all other NBA teams, began having players back in their facility for individual workouts last week. The team did not say if the positive tests involved players, staff or some combination of the two.

Portland is scheduled to open its preseason slate at home Friday against Sacramento, a game that -- for now -- is set to be televised nationally on ESPN.

Blazers President Neil Olshey, in a statement distributed by the team, said the decision to close the facility was made “out of an abundance of caution.” The team has also completed contact tracing, Olshey said.

The Blazers did not say how long their facility would be closed. There was no immediate announcement about the team’s plan for practice Monday, or if any talks had taken place about postponing or canceling Friday’s preseason opener.

“It’s something you’ve got to deal with,” Miami Heat guard and National Basketball Players Association vice president Andre Iguodala said Sunday when told of the Blazers’ situation -- the first facility shutdown in the league since teams began gathering last week. “Hope for the best but prepare for the worst and see what happens from there.”

The league told its teams on Saturday that clubs found to not be complying with league rules designed to minimize the spread of the coronavirus this season could face major penalties such as forfeiting games or draft picks.

NBA teams began coronavirus testing to prepare for camp around Nov. 24, and the league said 48 players -- almost 9% of all tested -- were positive for COVID-19 in the first week of that program.

The guard and forward says he tested positive for the novel coronavirus on Nov. 28 and is isolating in a Chicago hotel. He is mostly symptom-free after experiencing a headache and fatigue as well as some congestion, shortness of breath and a cough, though he did not lose his taste or smell.

Temple hopes to return to the Bulls’ facility midweek.

Through contact tracing, Temple believes he contracted the virus at a family Thanksgiving gathering in Louisiana.

Temple has averaged 6.4 points for nine teams since entering the NBA in 2010. He signed a one-year contract with Chicago after spending last season with Brooklyn.