The Latest: Fiji locks down hospital over coronavirus death 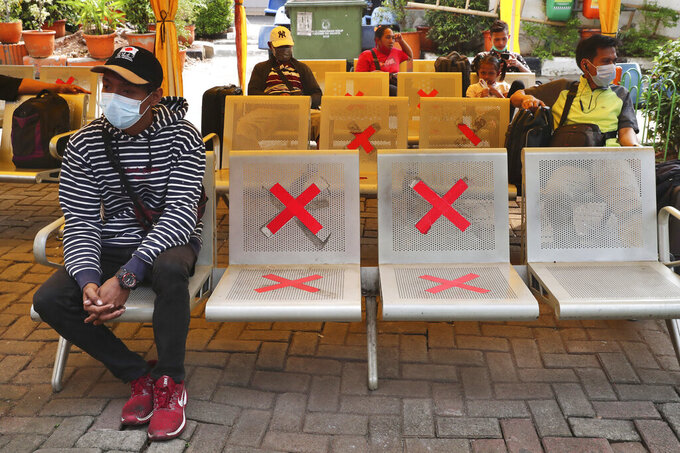 People sit among physical distancing markers as they wait for buses to go back to their home villages, at the Kalideres bus terminal in Jakarta, Indonesia, Wednesday, May 5, 2021. The mass exodus out of major cities in the world's most populous Muslim country is underway despite travel restrictions are imposed by the government to prevent the spread of the coronavirus outbreak, as people are heading home to their villages to celebrate Eid al-Fitr holiday that marks the end of the holy fasting month of Ramadan. (AP Photo/Tatan Syuflana)

WELLINGTON, New Zealand — Soldiers and police in the Pacific nation of Fiji have surrounded and locked down a major hospital.

Health authorities say they are quarantining 400 patients, doctors, nurses and other staff within the compound until they can determine who had contact with a coronavirus patient who died there.

The 53-year-old patient at Lautoka Hospital was only the third person to die from the virus in Fiji, which has about 1 million people. But the nation’s leaders are deeply worried that the latest outbreak is spreading, especially after two doctors at the hospital tested positive for the virus.

— U.S. virus toll projected to drop by end of July

MANILA, Philippines — The president of the Philippines is asking China to take back 1,000 doses of donated Sinopharm vaccine after facing criticism for receiving a shot even though it has not yet been authorized for public use in the country.

The Philippine health secretary injected Duterte with the coronavirus vaccine Monday. An unspecified number of Duterte’s guards have also been injected with the Sinopharm vaccine in secrecy.

The president apologized but says his use of the Chinese vaccine was recommended by his doctors and did not breach any regulation because it was covered by a “compassionate use” exemption.

Critics, however, say Duterte made a mockery of vaccine regulations while ordinary Filipinos have struggled with a plethora of pandemic restrictions.

Philippine regulators have approved coronavirus vaccines from seven foreign pharmaceutical firms for emergency public use but only three have made deliveries so far.

CHICAGO — Chicago leaders are planning the return of cultural events this summer, including a concert series only for people who are fully COVID-19 vaccinated.

The concerts, called the Protect Chicago Music Series, begin later this month and will require ticketholders to show vaccination cards and identification.

Chicago Department of Public Health Commissioner Allison Arwady said Tuesday that the city won’t mandate vaccines for Chicagoans but the concert series is a “creative way to incentivize” young people in particular to get it.

Mayor Lori Lightfoot also announced the return of numerous other cultural events this summer and fall with coronavirus safety precautions in place.

WASHINGTON — President Joe Biden has made a Cinco de Mayo taco and enchilada run to highlight his administration’s $28.6 billion program to help eateries that lost business because of the coronavirus pandemic.

Biden visited Taqueria Las Gemelas in Washington on Wednesday and ordered lunch. The restaurant is owned in part by Mexican immigrants and was a beneficiary of a pilot version of the restaurant relief program.

Biden says the restaurant industry was “badly hurt” by the pandemic. The aid for eateries is part of the administration’s $1.9 trillion coronavirus relief package.

The White House says 186,200 restaurants, bars and other eligible businesses applied for the program over its first two days of accepting applications.

WASHINGTON — The Biden administration is throwing its support behind efforts to waive intellectual property protections for COVID-19 vaccines in an effort to speed the end of the pandemic.

Tai says, “The Administration believes strongly in intellectual property protections, but in service of ending this pandemic, supports the waiver of those protections for COVID-19 vaccines.” But she cautions that it will take time to reach the required global “consensus” to waive the protections under WTO rules.

TWIN FALLS, Idaho — Health officials in Idaho are trying new methods to encourage people to get vaccinated as interest in COVID-19 shots starts to wane.

The Times-News in Twin Falls reported that the Idaho Department of Health and Welfare is giving up to $9 million in grant funding to encourage private health providers to host vaccination clinics.

The effort came after the state lifted restrictions and is allowing anyone to receive vaccines, even if they aren’t residents. Idaho has administered more than 1 million doses of COVID-19 vaccine, but the number of doses being given out has dropped.

NEW YORK — New York Gov. Andrew Cuomo says Broadway theaters can reopen Sept. 14. Many Broadway productions are scrambling to resume ticket sales in the coming days to welcome theater-goers this fall after city and state leaders have green-lit a reopening of the Great White Way at full capacity.

Broadway theaters will be allowed to decide their own entry requirements, like whether people must prove they’ve been vaccinated to attend a show.

Selling tickets will allow theaters to gauge interest before stages open, said Robert Mujica, Cuomo’s budget director. The Broadway that reopens will look different, with “Frozen” and “Mean Girls” deciding not to restart.

MADRID — Spain’s health minister says the European country has detected 11 cases of the new strain of the coronavirus first identified in India.

She added a plane carrying medical supplies, including oxygen and breathing machines, for hard-hit India will leave on Thursday. Last week, Spain’s government approved a shipment of seven tons of medical supplies to help India combat it surging wave of infections.

WOONSOCKET, Rhode Island —CVS Health is now accepting walk-in customers for COVID-19 vaccinations at all 8,300 of its stores that are doling out shots.

The drugstore chain started accepting customers with no appointments this week. It also is offering same-day appointments, which Walgreens started on Wednesday. Walgreens is also accepting walk-ins and expects to offer vaccines at all 9,200 of its U.S. stores by this weekend.

CVS Health is giving out vaccines at stores in 49 states, Puerto Rico and Washington, D.C. The company, which has nearly 10,000 retail locations, said it has given out more than 17 million doses through April.

WASHINGTON — The federal departments of health and housing have launched a joint project to provide coronavirus vaccines to the homeless and people living in low-income neighborhoods and subsidized housing.

Health and Human Services Secretary Xavier Becerra and Housing and Urban Development Secretary Marcia Fudge made the announcement on Wednesday during a visit to Community of Hope. It’s a service organization in an area of the nation’s capital that’s had high rates of coronavirus and relatively low rates of vaccination. The organization runs community health centers while also working to end homelessness among families.

“I think it is past time that this country understands that its government does care about them,” said Fudge, a former Ohio congresswoman. “We have gotten the low-hanging fruit — the people who really want the vaccines —now we have to go and do the next step.”

NEW YORK — Health experts are projecting the coronavirus toll in the U.S. will wane dramatically by the end of July.

That’s according to research released by the government Wednesday. But health experts also warn a “substantial increase” in hospitalizations and deaths is possible if unvaccinated people don’t follow basic public health guidelines, such as wearing a mask and social distancing. The Centers for Disease Control and Prevention paper included projections from six different research groups.

CDC Director Dr. Rochelle Walensky notes the variants of the coronavirus are a “wild card” that could set back progress.

More than 56% of the nation’s adults, or close to 146 million people, have received at one dose of vaccine, and almost 41% are fully vaccinated, according to the CDC.

The U.S. death toll stands at more than 578,000. A closely watched projection from the University of Washington shows the curve largely flattening out in the coming months, with the toll reaching about 599,000 by Aug. 1.

JEFFERSON CITY, Mo. — Missouri Gov. Mike Parson has directed all state employees to return to in-person work in the office by May 17, after many spent most of the past 14 months working remotely.

Parson’s order, announced Wednesday, also requires all state buildings be open and accessible to the public during normal business hours.

The governor’s office says COVID-19 screening and testing protocols will remain in place and the state is encouraging all employees to consider vaccinations.

The state health department reported 454 new confirmed cases and four more deaths. The state has confirmed 504,069 coronavirus cases and 8,818 deaths since the start of the pandemic.

CAIRO — Egypt says it will impose new restrictive measures amid a spike in coronavirus cases in the Arab world’s most populous country.

Prime Minister Mustafa Madoubly says his government will ban all events, entertainment parties and other gatherings for two weeks, starting Thursday. He says restaurants, shops, cafes and malls and social clubs will close at 9 p.m. every day.

The country’s beaches, parks and other public areas will be closed during the five-day holiday of Eid al-Fitr, which marks the end of the Muslim holy month of Ramadan. The holiday starts on May 12.

The country reported new cases surpassing 1,000 in the past week.

The Maine Office of Tourism estimates the total economic impact dipped to about $9 billion from more than $12 billion the year before. A late-summer boost in travel made up for some of the lost ground early in the pandemic.

Maine Gov. Janet Mills praised health and business leaders for lessening the impact of the coronavirus. She says the state’s reputation as a safe place helped draw visitors.

MADISON, Wis. — The coronavirus pandemic caused a 30% decline in direct spending by tourists in Wisconsin in 2020, but officials are optimistic the industry will rebound this year.

According to the Wisconsin Department of Tourism, spending dropped about $4 billion last year to $9.8 billion. All of Wisconsin’s 72 counties experienced a decline in tourism activity last year compared to 2019.

Dr. Supriya Sharma, chief medical adviser at Health Canada, on Wednesday confirmed the approval of the vaccine for ages 12 to 15.

The U.S. Food and Drug Administration also is expected to authorize Pfizer’s vaccine for the young by next week, setting up shots for many before the beginning of the next school year.

Preliminary results in late March from a Pfizer study of 2,260 U.S. volunteers ages 12 to 15 indicated there were no cases of COVID-19 among fully vaccinated adolescents compared with 18 among those given dummy shots.

The Pfizer vaccine was previously authorized for anyone 16 or older.

Vaccinations have ramped in Canada, which expects to receive at least 10 million vaccines this month. More than 34% of Canadians have received at least one dose.

GENEVA — Germany and the World Health Organization say the country will set up and host a global monitoring center to help prepare for and prevent future public health threats like the COVID-19 pandemic.

The “global hub for pandemic and epidemic intelligence” based in Berlin was announced Wednesday and will be coordinated by WHO. It aims to collect data, monitor risks and help drive innovations.

“The current COVID-19 pandemic has taught us that we can only fight pandemics and epidemics together,” said German Chancellor Angela Merkel, saying the hub will bring together governmental, academic and private sectors.

WHO Director-General Tedros Adhanom Ghebreyesus says the pandemic has “exposed gaps in the global systems for pandemic and epidemic intelligence.”

The hub, which will receive about 30 million euros ($36 million) from Germany and seek funds elsewhere, will build on existing monitoring mechanisms at WHO and elsewhere. Those include the Global Outbreak Alert and Response Network and the Epidemic Intelligence from Open Sources system.