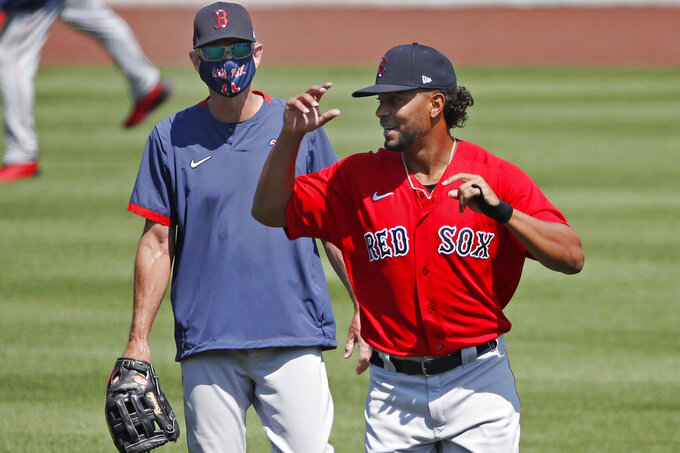 The University of Houston athletics department announced several budget cuts on Tuesday due to the coronavirus pandemic.

The school will cut 18 jobs administrative and support staff positions in the department by the beginning of the 2021 fiscal year, which starts Sept. 1. Houston will cut its operating budget for the upcoming fiscal year by 7.5% and its administrative budget in the same time frame by 10%.

The school is not cutting any sports, but each of its 17 sports will have their budgets cut by 5% in the new fiscal year.

Houston is also working on a more regional non-conference travel schedule for its sports to limit travel costs and staff travel, excluding for recruiting, will be reduced.

The Chicago Cubs delayed the start of their workout a few hours on Tuesday because they were awaiting some new coronavirus test results, manager David Ross said.

The move came one day after slugger Kris Bryant criticized the lack of frequency of the tests and delays in getting results.

Ross urged patience from everybody.

“This isn’t a huge deal,” Ross said. “It seems a little bit bigger with what’s been going on with some teams the last day or so. I think, again, in everybody’s world we have to have a little bit of patience. We can’t just crush MLB because this is new to them, too, and the testing facility."

The 24-year-old Keller is in his third season with Kansas City after joining the organization as a Rule 5 selection in December 2017.

“Of course I was devastated when I heard the news ... that I had two positive tests,” Keller said in a statement Tuesday. “I was sent home yesterday and was hoping the first test was a false positive, but I got the word today that the second test also came back positive and I have to go into isolation. I am experiencing minor symptoms that remind me more of an allergy attack. Other than that, I feel great and have no other symptoms,"

The 26-year-old O’Hearn said he was shocked his test was positive because he’s asymptomatic and feels fine physically. He’s also in quarantine.

O’Hearn played in 105 games for the Royals last year, his second stint with the big league club, hitting 14 home runs.

Rodriguez has yet to report to camp after previously informing the team that he had been around relatives who had been ill. Dalbec, a 25-year-old third baseman, is also at home and currently is asymptomatic.

Roenicke said that he intended to have Rodriguez start on opening day.

“Just unfortunate that we might not be able to still do it,” Roenicke said. “We’ll have to wait and see.”

The San Francisco Giants say they are “suspending workouts at Oracle Park, pending the results of tests conducted this past weekend.”

On Monday, the club announced two people had tested positive for the coronavirus without providing further details on whether the two were players, coaches or staff. Prospect Hunter Bishop and pitcher Luis Madero, in the 60-player pool, already tested positive.

This means no simulated games as planned for Tuesday, and Giants manager Gabe Kapler had said Monday he considered his club fortunate to not be dealing with any interruptions thus far.

Oklahoma and Texas officials are cautiously optimistic that their annual football showdown still will be played at the Cotton Bowl in the Fair Park in Dallas, despite the announcement Tuesday that the fair would be canceled.

Oklahoma-Texas is one of the longest-running and most intense rivalries in college football. This year’s game is scheduled for Oct. 10.

“Though we certainly respect and understand the decision of the folks in Dallas on their cancellation of this year’s State Fair of Texas, we fully anticipate that our annual Red River Showdown with Oklahoma will be played in the Cotton Bowl and are continuing to prepare for that,” Texas athletic director Chris Del Conte said in a statement.

Oklahoma athletic director Joe Castiglione said in a statement that “the best thing all of us can do at this time is closely follow CDC guidelines to reduce the spread of the virus.”

The Cleveland Indians are keeping outfielder Franmil Reyes away from training camp after they spotted him on social media attending a weekend holiday party without wearing a mask.

Manager Terry Francona said Reyes is not in any trouble with the team. But by not practicing social distancing or wearing a mask he exposed himself — and his teammates — to infection, and the team is being overly cautious.

Francona said Reyes, who was traded to Cleveland last season from San Diego, will have to be re-tested for the virus “when it’s appropriate.”

“He’s not in the penalty box,” Francona said. “It’s just the way we have to operate right now. So, hopefully we’ll see him soon.”

Francona said Reyes, who hit 37 homers combined for the Padres and Indians last season, apologized for not being more careful.

“He didn’t so anything bad,” Francona said. “We just have to live by certain guidelines right now.”

General manager Mike Rizzo said the team felt confident about getting back to Nationals Park for practices after receiving all player and staff test results from Friday. The American League champion Houston Astros also canceled workouts Monday and resumed Tuesday.

A handful of players did not take part in workouts, including Starlin Castro, Juan Soto, Howie Kendrick and Victor Robles. Without naming names, Rizzo said two players tested positive for the coronavirus and that any players and staff who came into contact with them had to be re-tested

The league is continuing to evaluate Nashville’s participation in its tournament. FC Dallas withdrew Monday after 10 players tested positive for coronavirus.

Durr detailed her struggles with COVID-19 in a post on Instagram. The former Louisville star says she hasn't fully recovered.

The second pick of the 2019 WNBA draft averaged 6.7 points in her rookie season, starting 15 of her 18 appearances before being sidelined for the season with a hip injury.

“Asia worked extremely hard this offseason to put herself in position to take a major leap forward in her second WNBA season,” Liberty general manager Jonathan Kolb said. “While we are disappointed that we will need to wait a bit longer to see her emerge as one of the bright young players in the game, we fully recognize and support the difficult decision she had to make amidst unprecedented circumstances. Brooklyn will be ready for her in 2021.”

Two members of Louisville’s men’s basketball program have tested positive for the new coronavirus and the team has suspended voluntary activities for two weeks.

A news release from the school did not specify whether it was players or staff members who tested positive. It added that those impacted are being quarantined and proper protocols are being followed.

The R&A is going ahead with the Women’s British Open at Royal Troon without spectators.

The Women’s British Open is set for Aug. 20-23 at Royal Troon along the Ayrshire coast of Scotland. It would be the first major on the LPGA Tour schedule that is played this year and it would be the week after the Ladies Scottish Open on the other side of the country just east of Edinburgh.

Qualifying for the AIG Women’s British Open has been canceled. The R&A says the field will be comprised of leading players from the women’s world ranking and recognizing top performances at recent events on the world’s leading tours.

The International Cycling Union says this year’s BMX world championships have been canceled because of the coronavirus pandemic.

The event was scheduled to be held in Houston in May and was at first postponed.

The UCI says no new host was found “despite its best efforts to come up with an alternative.”

The next BMX worlds are scheduled to start in Papendal, Netherlands, in August 2021. That is one week after the Tokyo Olympics. Four BMX medal events are on the Olympic program.

The UCI also says the 2020 season in BMX Freestyle Park and Flatland World Cup will not happen.

The club from the Black Sea town of Varna says 12 players are among the positive cases and adds “all players who tested positive are quarantined and we have taken the necessary precautions.”

Cherno More played a league game against Tsarsko Selo in Sofia on Thursday. The laboratory that conducted pre-match tests admitted the following day that it had not announced that one of the players on the team from Sofia had tested positive.

Cherno More says the club is still ready to play on Tuesday against Arda Kardzhali despite the positive tests. The quarantined players would be replaced by members of the team’s junior squad.

The Austrian soccer league has started an investigation into testing procedures for the new coronavirus of all 16 second-division teams after three players from one club tested positive over the weekend.

The league says each club must provide receipts and test results to prove that all players have been tested on a weekly basis since play resumed on June 5 after a 12-week break.

The investigation comes after last-place Kapfenberger SV apparently breached the anti-coronavirus rules by failing to structurally test its players.

The league opened proceedings against Kapfenberg on Monday.

Two more badminton tournaments have been canceled in the revamped calendar because of the coronavirus pandemic.

The China Masters in Lingshui was canceled after already being moved from February to May and then to August.

It was to be the first comeback event but that’s now expected to be the Chinese Taipei Open in Taipei from Sept. 1-6.

The Dutch Open in Almere in October was also put off for this year.