The Latest: Howard U cancels remainder of men's hoops season 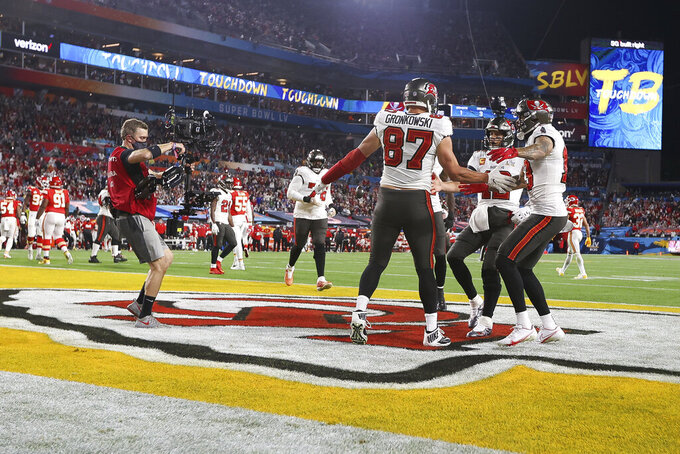 Howard University has canceled the rest of its men’s basketball season almost two months since playing just its fifth game.

The Washington, D.C., school said the decision was made out of an abundance of caution because of the COVID-19 pandemic.

“We had several team members test positive in January and were forced to place the program on hold, cancel several games and finally cancel our season,” coach Kenneth Blakeney said. “It was and remains the right thing for us to do.”

The NFL reports it had no positive tests for players and one positive among other personnel during Super Bowl week.

Tampa Bay beat Kansas City 31-9 in the Super Bowl on Sunday, with no players missing the game because of COVID-19 issues.

Total test results for the entire period from training camp on Aug. 1 through last Saturday showed 262 players and 464 other personnel were confirmed positive cases out of some 959,860 tests administered.

North Carolina’s players and managers have apologized for not following school and athletics COVID-19 guidelines tied to a celebration after a win at rival Duke.

The school on Tuesday released a group statement by the players and managers, as well as a statement from coach Roy Williams. Those statements came less than a day after the Tar Heels’ home game against Miami was postponed about two hours before tipoff after video emerged on social media of players Armando Bacot and Day’Ron Sharpe mingling with multiple other people celebrating Saturday’s win with no one wearing a mask.

The group statement said it was intended to be a private gathering before “several” friends who are not team members were allowed to attend. The statement notes that multiple players and managers attended and “not just the ones shown on the video” on social media, while they didn’t wear masks despite being inside.

Their statement also apologizes to Williams and the coaching staff for “not stepping forward when he first addressed it" on Sunday.

In his statement, Williams said the players had previously handled safety protocols well but made a mistake “for which they are paying a very significant price.”

The league has postponed Tuesday night’s Flyers-Capitals game in Washington because of COVID-19-related issues with Philadelphia. It’s the 34th game postponed so far this season, which is roughly a quarter of the way through.

Flyers defenseman Travis Sanheim was added to the league’s COVID protocol list Sunday, and teammates had to take rapid tests that morning before playing the Capitals in the afternoon. That game went on as scheduled. A second Flyers player also entered COVID protocol.

Philadelphia’s upcoming games against New Jersey and Washington’s at Buffalo scheduled for Thursday and Saturday were already postponed because of breakouts on the Devils and Sabres.

Some Buffalo players returned to practice Tuesday, though 61-year-old coach Ralph Krueger is dealing with symptoms, according to general manager Kevyn Adams. Krueger allowed the team to reveal he tested positive.

Ryder Cup captain Padraig Harrington has tested positive for the coronavirus and has withdrawn from the AT&T Pebble Beach Pro-Am.

Harrington missed the cut last week at the Phoenix Open, ending his streak of seven consecutive cuts made worldwide.

The Irishman is the fifth player this year in six PGA Tour events who had to withdraw because of a positive test. That includes Jim Herman, who tested positive in Florida and did not finish his self-isolation in time to travel to Maui for the Sentry Tournament of Champions.

Big Ten officials announced Tuesday that the conference is moving next month’s men’s basketball tournament from Chicago to Indianapolis.

The tournament will be played March 10-14 at Lucas Oil Stadium, site of this year’s Final Four. The Big Ten women’s tournament was already scheduled to take place the same week at Bankers Life Fieldhouse, home of the NBA’s Indiana Pacers and WNBA’s Indiana Fever. The venues are just a few blocks apart.

League officials say the decision was made because of health and safety concerns, the ability to enact consistent medical protocols for both tournaments, and the centralized accommodations in a city that already is planning to host most of the 67 NCAA men’s tournament games in March and April.

Indianapolis also was the site of last year’s Big Ten Tournament, which was canceled before the second day of games began because of the coronavirus pandemic.

The British variant of the coronavirus is causing problems for a second-division soccer club in France.

FC Chambly says nine of its players have been infected with the more contagious COVID-19 variant. Three staff members and one management official have also tested positive at the club.

The club says it is “worried about what will happen next” because the rest of the team continues to train and risks being contaminated.

Chambly says further testing will be carried out ahead of its league match at Clermont on Saturday.