The Latest: Kyrgios saves match points in win over Humbert 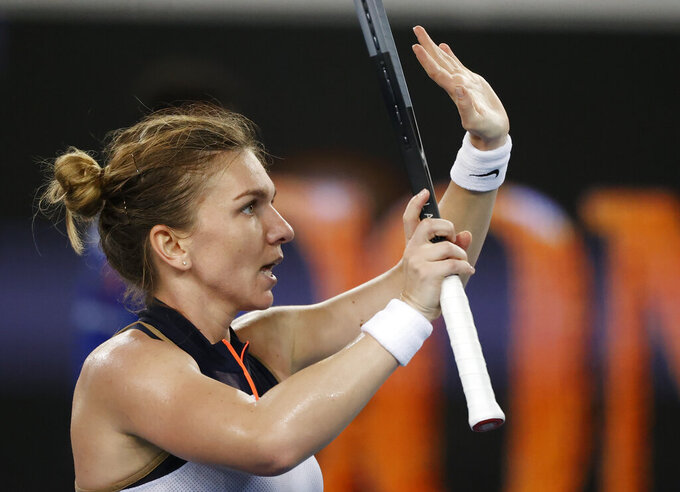 The mercurial Australian will meet third-seeded Dominic Thiem in the third round. Thiem lost the final at last year’s Australian Open and went one better to win the U.S. Open title.

Kyrgios is playing in his first major since the 2020 Australian Open. He hasn’t left Australia since the COVID-19 pandemic began.

He has played his first two matches on the the third show court at Melbourne Park. It is officially renamed the John Cain Arena this year but known by Kyrgios and his fans as the Peoples' Court.

The official crowd at Melbourne Park on Wednesday was 19,900. That is the biggest so far of the tournament. The government has restricted the capacity to about 30,000 daily because of the pandemic.

There were thousands of fans watching Kyrgios play the late match and he said they helped him through “some dark thoughts there” when he was facing match points.

Simona Halep narrowly averted an early exit at the Australian Open on Wednesday night, coming back from 5-2 down in the third set to beat No. 72 Ajla Tomljanovic of Australia 4-6, 6-4, 7-5.

The second-seeded Halep hadn’t lost to a player ranked as low as Tomljanovic since her second-round defeat to No. 116 Taylor Townsend at the 2019 U.S. Open.

Halep struggled to find her range with her groundstrokes, committing 37 unforced errors. The two players combined for 15 service breaks.

“I expected she’s going to play hard and very strong,” Halep said. “I expected it would be a difficult match, but it was more than I thought. I’m really happy I can smile now.”

Halep, a two-time major champion, is closing in on her 100th Grand Slam main draw win. With the victory over Tomljanovic, she’s now 98-38.

The U.S. Open champion beat Anastasia Pavlyuchenkova, a three-time quarterfinalist at Melbourne Park, 6-1, 6-2 in the first round. The matches lasted just over an hour each.

With her quick matches, third-seeded Osaka has had plenty of spare time in Melbourne, but she admitted after the match she's pretty much just stayed in lockdown.

Her first day in Melbourne after the mandatory quarantine, she said, “I was really excited because you guys get to do stuff unlike in America."

"So I walked around, but then I felt guilty and didn’t know if people were staring at me, so now I just stay in my room and watch Netflix.”

Osaka is on a 16-match win streak, with her last loss coming in a Fed Cup match last February. She has had two walkovers since the WTA Tour resumed in August, including last week before the semifinal of the Gippsland Trophy warm-up tournament.

Both players were on serve in the fourth set and looked headed for another tiebreaker when Tiafoe was given a time violation on his serve. He lost his temper — and then his serve — to fall behind 3-4. He didn't win another game in the match.

Though Tiafoe played an aggressive match, Djokovic was better when it mattered. He had the edge in terms of winners (56-49) and converted five break points to just two for Tiafoe.

Djokovic had only lost in the second round once at Melbourne Park, against Denis Istomin in 2017.

Venus Williams made a heartbreaking exit at the Australian Open after rolling her ankle in her second-round match against Sara Errani, losing 6-1, 6-0 in just over an hour.

The seven-time major winner was trailing 1-5 in the opening set when she landed awkwardly on her ankle as she approached the net for a volley.

She fought back tears before receiving treatment on the ankle, and then her left knee, which was also troubling her.

Williams gamely tried to continue, hobbling between points and tapping in second serves at around 100 kph (62mph). But she couldn’t threaten Errani, a speedy, defensive player who made Williams run with drop shots, volleys and lobs.

U.S. Open champion Dominic Thiem has eased through the second round of the Australian Open with a 6-4, 6-0, 6-2 win over Donimik Koepfer of Germany.

The No. 3-ranked Thiem reached his maiden Grand Slam final here in Australia last year before losing to Novak Djokovic. He went one better at the U.S. Open by claiming his first major trophy.

He could face either mercurial Australian Nick Kyrgios or 29th-seeded Ugo Humbert in the third round.

Thiem said the win over Koepfer was his best so far since arriving in Australia “and there's a lot of good stuff to build on.”

He'll be tuning in to see who he faces next.

“Definitely going to watch it and looking forward to it," he said. “I’ll wait for (the winner) on Friday.”

Wawrinka had won four of his eight previous five-setters at the Australian Open — and he nearly made it another. But five unforced errors in the last seven points of the tiebreaker cost him the match.

The three-time major winner had 73 unforced errors in total, including 43 on his normally reliable one-handed backhand.

Two-time major winner Garbiñe Muguruza is through to third round of the Australian Open after a 6-3, 6-1 win over Liudmila Samsonova of Russia.

Muguruza has been in impressive form since the start of the year, reaching the final of last week's Yarra Valley Classic warm-up tournament with the loss of just 10 games. She next faces Zarina Diyas of Kazakhstan.

The 14th-seeded Spanish player made the final of last year's Australian Open, falling to Sofia Kenin.

Two-time Wimbledon champion Petra Kvitova has become the second top 10 women’s player to fall in the second round of the Australian Open.

Kvitova reached the 2019 Australian Open final, losing to Naomi Osaka. She had also reached the fourth round or better at five of the past six Grand Slam tournaments.

Kvitova had 44 unforced errors against Cirstea to just 21 winners.

Serena Williams is back in the Australian Open’s third round, where her stay in the Grand Slam tournament ended a year ago.

The owner of an Open era-record 23 major singles championships moved on by grabbing the last seven games to beat 99th-ranked Nina Stojanovic of Serbia 6-3, 6-0 in a little more than an hour.

The 39-year-old American has won the title in Australia seven times, but her third-loss to Wang Qiang in the third round in 2020 was Williams’ earliest exit at Melbourne Park in 14 years.

This time, Williams will try to go further with a win against Anastasia Potapova, a 19-year-old Russian who was the junior champion at Wimbledon in 2016 and currently is ranked 101st.

Potapova has yet to win a tour-level title and will be making her debut in the third round at a major tournament.

American Ann Li has reached the third round at a Grand Slam for the second time in a row by beating Alize Cornet at the Australian Open, 6-2, 7-6 (6).

Li, who is 20 and ranked 69th, made her Grand Slam debut in Melbourne a year ago and reached the third round at the U.S. Open.

She reached her first WTA final last week at the Grampians Trophy by winning three matches. The final was called off for scheduling reasons.

Bianca Andreescu's return to competitive tennis has been cut short after she lost in the second round of the Australian Open to Hsieh Su-Wei of Taiwan 6-3, 6-2.

Andreescu looked out of sorts from the start against the crafty Hsieh, who threw the 2019 US Open champion off her rhythm with her deep, angled groundstrokes and array of slices.

Andreescu, the eighth seed, hadn't played a match for 15 months due to injuries and the pandemic before she beat Mihaela Buzarnescu in the first round at Melbourne Park.

She had 25 unforced errors against Hsieh and only saved three of the nine break points she faced. She double-faulted on match point.

Hsieh is known for knocking off top players in Grand Slam tournaments, having previously beaten Garbiñe Muguruza at the Australian Open and Simona Halep at Wimbledon.

Serena Williams and Novak Djokovic headline the matches on Rod Laver Arena during the day session at the Australian Open.

Williams plays 99th-ranked Nina Stojanovic of Serbia in the second round. The 23-time major winner has a 72-2 record in second round matches at Grand Slams, with her only two losses coming against her sister Venus (1998 Australian Open) and Garbine Muguruza (2014 French Open).

Djokovic, the top seed in the men's draw, takes on American Frances Tiafoe in the next match. Tiafoe, ranked 64th, has never defeated a player ranked in the top five.

Other previous Grand Slam champions in action on the women's side include Bianca Andreescu, who is playing Hsieh Su-wei; Simona Halep, who is taking on Ajla Tomljanovic; Venus Williams, who plays Sara Errani; and Naomi Osaka, who plays Caroline Garcia in a night session match.