The Latest: Mavs coach Carlisle tests positive, out vs NY 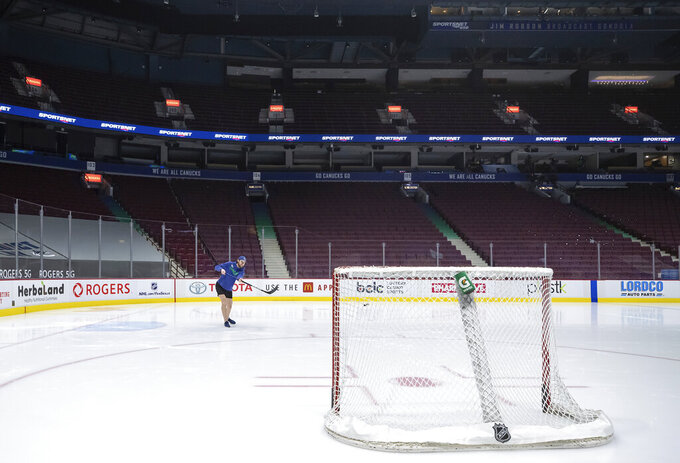 Vancouver Canucks goalie Thatcher Demko walks on the ice and shoots a puck around after the team's NHL hockey game against the Calgary Flames was postponed due to a positive COVID-19 test result in Vancouver, British Columbia, Wednesday, March 31, 2021. (Darryl Dyck/The Canadian Press via AP)

Dallas Mavericks coach Rick Carlisle will miss Friday's game at the New York Knicks after testing positive for COVID-19 the morning of the game.

Carlisle says he has been fully vaccinated since January and wasn't experiencing any symptoms. The 61-year-old was hopeful it was a false positive and he would still be able to coach against New York.

The official word that Carlisle was out came just a few minutes before tipoff. Assistant Jamahl Mosley is filling in. Carlisle's next game will be his 1,500th in the regular season as a head coach.

After the positive test, Carlisle stayed behind at the team hotel. He met virtually with reporters about an hour before the game to announce the positive test while revealing publicly for the first time that he is vaccinated.

The Mavericks were hit hard by COVID-19 in January, with as many as four rotation players sidelined at the same time. The club’s record suffered as a result, but Dallas entered the New York game 17-8 since being a season-high five games under .500 in early February.

Atlanta United will allow 50% capacity for its home opener of the Major League Soccer season.

The team plans to open the two lowest levels of 71,000-seat Mercedes-Benz Stadium for the April 24 match against Chicago Fire.

Officials say they will determine stadium on a match-by-match basis.

Atlanta United has set numerous attendance records since joining MLS in 2017. The team generally closes off the upper deck for home games, limiting capacity to around 42,500, but does open the entire stadium for selected games.

“We’re excited to be able to kick off our 2021 season at 50% capacity,” said Catie Griggs, Atlanta United’s chief business officer. “This allows for seating pods to remain distanced from one another, while providing more of our season ticket members the opportunity to safely attend our first match.”

The NHL has moved Winnipeg's home game against Ottawa that was originally scheduled for May 7 to Monday.

The league announced the schedule change Friday and said it was a result of recently postponed games affecting the Jets and Vancouver Canucks.

The Canucks have had their games postponed through Tuesday after two players and a member of the coaching staff entered the league’s COVID protocol.

The postponed contests include games originally scheduled for Sunday and Tuesday in Winnipeg.

The Washington Nationals say their season-opening three-game series against the New York Mets has been postponed because of coronavirus concerns.

That includes games scheduled for Saturday and Sunday at Nationals Park. Thursday night’s game already had been put off.

At least three Nationals players have tested positive for COVID-19, the illness caused by the novel coronavirus.

The team’s statement announcing the series has been scrapped said the decision was “due to continued follow-up testing and contact tracing involving members of the Nationals organization.”