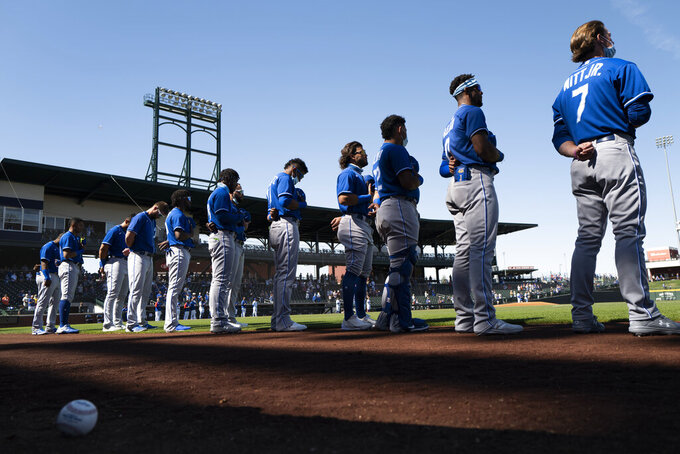 The Kansas City Royals plan to allow a limited number of fans to return to Kauffman Stadium when the baseball season begins next month, the team announced Thursday.

The Royals will initially have 10,000 fans per game, sitting in socially distanced, pod-style arrangements. The number of fans will increase monthly if it's safe to do so, the Royals said in a news release.

Team officials have worked for months with Kansas City health officials and the Jackson County Sports Authority to ensure fans will have a safe experience, the team said.

Royals Manager Mike Matheny said he and his team are thrilled to have fans back after playing in front of empty stadiums last season.

“Words cannot describe how excited all of us are to be able to open at home ... in front of as many of our blue-clad fans that the protocols will allow,” he said. “It will be a completely different environment than last year and bring a little more normalcy to our sport and lives.”

The Royals open the season April 1 at home against the Texas Rangers.

The Big Ten will allow a limited number of fans to attend the men’s and women’s conference basketball tournaments in Indianapolis next week.

Each tournament runs five days, with the women starting Tuesday and the men on Wednesday.

Fans will be required to wear facemasks at the venues except for when they are actively consuming food or drink.

The International Ice Hockey Federation has tentatively scheduled the women’s world championships for mid-May after canceling the 2020 tournament because of the coronavirus pandemic.

The IIHF pushed back the 10-team women’s worlds from April 7-17 to May 6-16 in Halifax and Truro, Nova Scotia. IIHF president Rene Fasel told The Associated Press on Monday the organization was considering a delay in the hopes of restrictions being relaxed by then.

“Our organization knows it will have strict support from all participating federations as it relates to adhering to the final health and safety plan that will focus on quarantining, COVID-19 testing, single-room isolation, masking, proper hygiene and social distancing,” Hockey Canada president and CEO Scott Smith said Thursday. “Hosting a successful world championship this season means ensuring the health and safety of everyone involved, which continues to be our top priority.”

The Milwaukee Brewers will have a limited number of fans at home games this season.

The Brewers announced Thursday that Milwaukee health commissioner Kirsten Johnson has approved a plan allowing fans to fill 25% of the seating capacity at American Family Field, the stadium formerly known as Miller Park.

The Brewers had sought to allow 35% capacity.

Brewers president of business operations Rick Schlesinger said in a statement that the team would “continue to communicate with the city officials and work toward increasing the capacity if the health metrics continue to improve.”

Tailgating won’t be allowed outside the stadium, a big tradition for Brewers fan, at the start of the season.

The St. Louis Cardinals say they’ve received approval from the city to fill Busch Stadium at 32% capacity starting with their April 8 home against the Milwaukee Brewers.

City health director Dr. Fredrick Echols says new COVID-19 infections have been declining and the positivity rate in St. Louis dipped below 5% for the first time since mid-September.

“The Cardinals organization has worked diligently to ensure they are able to create and maintain a safe environment for staff and fans. Wearing a face covering, social distancing, cleaning, and other infectious disease control measures they have in place for the stadium should keep us moving in the right direction,” Echols said in a news release.

Season ticket holders will get the first crack at tickets for the first two homestands, then the general public if tickets remain. The Cardinals said fans will be seated in pods of four or fewer with at least 6 feet of space between pods. Masks will be required except when eating or drinking.