The Latest: NFLPA advises halt to private workouts together 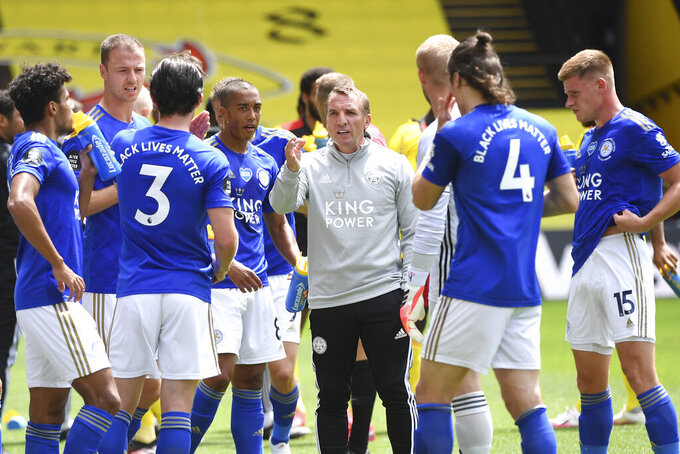 The medical director of the NFL players’ union has recommended that all players stop private workouts together.

Dr. Thom Mayer told members of the NFLPA in a message Saturday that the risk of being stricken by the new coronavirus is too great to be staging those workouts.

Mayer said staff was working on the best mitigation procedures at team facilities for both training camps and the upcoming season and advised “against any voluntary joint practices before training camp commences.”

In recent days, members of the Buccaneers, Cowboys, 49ers and Texans organizations tested positive for COVID-19.

The NFL has allowed team facilities to reopen on a limited basis, with no players except those rehabilitating injuries allowed on the premises.

Training camps are scheduled to open in late July, with the first preseason contest the Hall of Fame game on Aug. 6 between Dallas and Pittsburgh.

The league has said it plans to play its season as scheduled, with the first game set for Sept. 10 at Kansas City.

Rio de Janeiro Mayor Marcelo Crivella has suspended all professional soccer matches in the city only three days after play restarted amid the coronavirus pandemic.

Crivella issued a decree on Saturday arguing that time is needed to adapt safety protocols for all teams. The suspension is valid for five days.

On Thursday night, Flamengo beat Bangu 3-0 at Maracanã Stadium in the first professional soccer match in South America in nearly three months. The game marked the return of Brazil’s state leagues, but at a field hospital near a stadium gate doctors said two COVID-19 patients had died.

So far, Rio state has counted more than 8,500 fatalities from the disease. Brazil officially topped 1 million cases of COVID-19 on Friday.

Kansas State has paused all voluntary workouts for football players for two weeks following the most recent COVID-19 test results.

As of Friday, 14 athletes had tested positive for active COVID-19 following testing of more than 130 athletes. The school said those who have tested positive are being medically managed according to current guidelines. That includes self-isolation for 10 days and until the patient is without fever for 72 hours without medication, whichever takes longer.

Athletics director Gene Taylor said the university felt that temporarily pausing all football workouts and access to facilities was the best decision for everyone.

The second player was asymptomatic and has been in isolation since Wednesday, adhering with MLS health and safety protocols that require at least two positive tests to ensure the first result was not a false positive.

The team conducted non-contact, individual training sessions on Friday and Saturday and will continue non-contact training on Monday. Mandatory COVID-19 testing will take place again Monday. If negative test results for all players and staff are received, the team will resume full team training on Tuesday.

Three members of the NFL's Tampa Bay Buccaneers have tested positive for the- novel coronavirus at the team’s training facility, and the Bucs have closed affected areas of the building.

The team said those areas will remain closed until extensive sanitizing is completed.

All individuals who may have been exposed have been notified, the Bucs said in a statement, “and are following the established protocols, which include a 14-day quarantine period.” The team did not identify three people who tested positive.

Team headquarters is remaining open under the first phase of the NFL’s reopening plan.

The Toronto Maple Leafs will not comment on reports that star player Auston Matthews has tested positive for the coronavirus.

The Toronto Sun and The Toronto Star report that the center tested positive. The Leafs say a player’s medical information is private.

Toronto is deferring to the NHL’s policy on handling test results, with the league providing updates on testing totals and positive tests without disclosing the identities of affected clubs or players.

Judd Moldaver, Matthews’s agent, did not respond to requests for comment.

According to the Sun, the 22-year-old Matthews has self-quarantined in his Arizona home and hopes to be ready to play if the NHL season resumes. The NHL hopes to open training camps next month, and finish off the 2019-20 season later this summer.

Matthews had 47 goals and 33 assists in 70 games before the suspension of the season on March 12.

Toronto goaltender Frederik Andersen stayed with Matthews in Arizona for the first stages of the COVID-19 pandemic, but according to the Toronto Sun he tested negative for the novel coronavirus and is no longer in Arizona.

The league said Friday that it has tested more than 200 players at club facilities during voluntary training since June 8, with 11 testing positive.

French soccer authorities are allowing fans back into stadiums from July 10, with an initial limit of 5,000.

Noël Le Graët, president of the French Football Federation, says it is possible more spectators will be allowed into the French Cup final at the end of July and for the resumption of top-tier Ligue 1 play at the end of August.

The federation’s executive committee will discuss the new measures and the specifics of the new calendar on Monday.

The French government called off the country's 2019-20 soccer season on April 28 as part of efforts to contain the coronavirus pandemic.