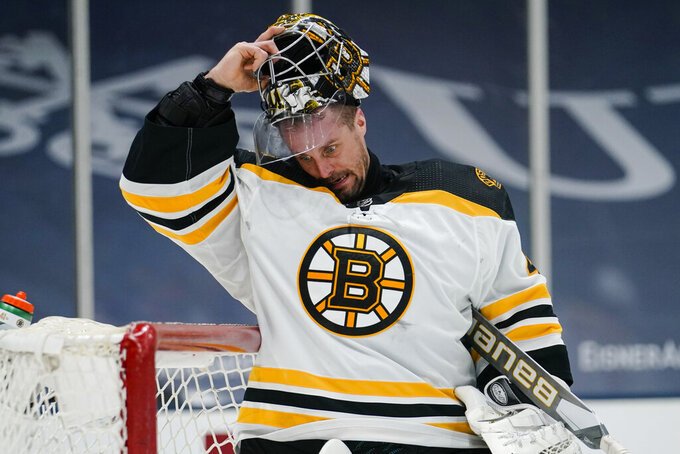 The NHL had nine players listed in its COVID-19 protocol, matching the most since Feb. 24.

The Boston Bruins had four players added to their list, which resulted in the league postponing their next two games. Boston’s David Pastrnak, Jake DeBrusk, David Krejci and Craig Smith joined Sean Kuraly, who entered the protocol a day earlier.

The five players on one team are the most since the Philadelphia Flyers had five on Feb. 23.

A total of 153 players have spent at least one day in the protocol since the NHL season began publishing its list on Jan. 13.

The NHL has paused the Boston Bruins after four more players entered the league’s COVID protocol.

Bruins games Saturday against the Buffalo Sabres and Tuesday against the New York Islanders were postponed and team facilities closed until at least Wednesday. They’re the 36th and 37th games to be postponed this season for virus-related reasons.

Boston’s Sean Kuraly was the team’s only player on the COVID list Thursday. The Bruins played Thursday night against the Sabres, who had a staff member enter protocol.

The Bruins game Tuesday was scheduled to be the first in Massachusetts with fans back — at a limited capacity of 12%.

The pause provides the Sabres a three-day break before they play at the New York Rangers on Monday. It’s Buffalo’s longest rest since the team’s schedule was paused for two weeks in early February.

Contact tracing has been completed, and the school says no other players or coaches were affected. While Stricklin is in isolation, associate head coach Scott Daeley will take over the top job.

The 49-year-old Stricklin is in his eighth season as Georgia’s coach. He led the Bulldogs to the NCAA Tournament in 2018 and 2019.