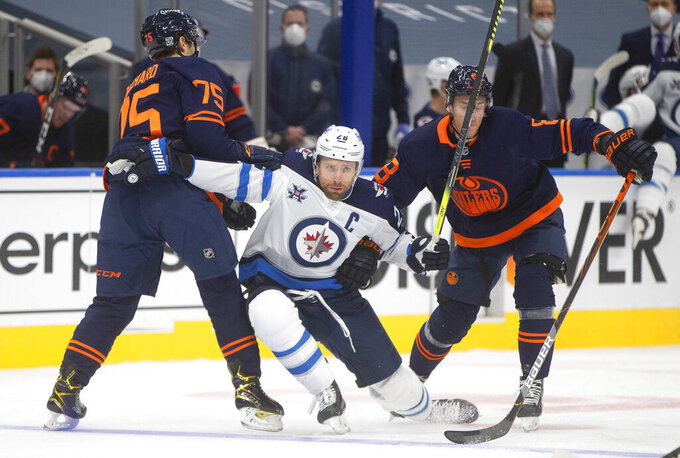 The NHL’s COVID-19 list is now down to 13 players, marking the second-lowest total since the league first began publishing it on Jan. 13.

The 13 players are the fewest since there were 12 listed on Jan. 17, and continues a steady decline since a league-high 59 players were sidelined on Feb. 12.

Wild goalie Andrew Hammond was the only new addition in becoming the 15th Minnesota player to appear on the list. His addition came the same day four Wild players were removed from the list: Jonas Brodin, Victor Rask, Carson Soucy and Cam Talbot.

Hammond became the 124th player to appear on the list, which includes those who either test positive, are identified as close contacts, or are in mandatory quarantine after traveling from another country.

The Philadelphia Flyers are down to six players listed after forward Morgan Frost was removed after a seven-day stint. Los Angeles Kings forward Andreas Athanasiou was also cleared after spending a league-high 21 days on the list.

The drop coincides with enhanced health and safety measures the league introduced over the past two weeks in an attempt to stem further outbreaks.

The Brampton Beast of the ECHL have folded, citing the COVID-19 pandemic.

The professional hockey team started in 2013 in the Central Hockey League, helping fill the void after the Ontario Hockey League’s Brampton Battalion moved to North Bay. When the CHL folded in 2014, Brampton and six other teams joined the ECHL.

“We played seven years in Brampton. We had some momentum. I think we were improving both on and off the ice,” team president and GM Cary Kaplan said “And the global pandemic hit. People think of it for one year, but it’s really impacted for us three seasons of hockey. It was too much for our team to overcome.”

The league suspended play in March. Fourteen teams subsequently elected to take part in the 2020-2021 season, with 12 -- including Brampton -- sitting out.

The Beast were affiliated first with the Tampa Bay Lightning and then the Montreal Canadiens and Ottawa Senators.

The league said Brampton’s players will become free agents after the completion of the 2020-21 season.

The Ivy League has decided not to hold a spring sports conference season for the second straight year because of COVID-19.

The move announced Thursday by the conference presidents came nearly a year after the conference was the first to cancel its postseason basketball tournament.

The Ivy League presidents wrote in a joint statement that they decided to cancel the spring sports seasons to be consistent with the schools' measures to protect everyone on campus.

While there won’t be any league competitions or championships, the presidents would allow the eight schools to participate in local non-conference games that are within 40 miles if the coronavirus pandemic greatly improves.

The NHL’s COVID-19 numbers have dropped steadily over the past five days.

After peaking at 59 players last Friday, the number was down to 18 after Wednesday night’s action. That marks the fewest on the list since 17 were listed on Jan. 19.

Andreas Athanasiou of the Los Angeles Kings has now spent 21 consecutive days on the list. That's a high among players.

Wisconsin is expecting to have fans back in the Camp Randall Stadium stands for the upcoming football season after playing without spectators at home games last year.

The school released a video message from athletic director Barry Alvarez saying that “we are planning to have our fans back in the stands.” Alvarez added that school officials really don’t know how many people will be allowed.

In a statement Thursday, the league said attendance at the two tournaments in Greensboro, North Carolina, would be limited to family and guests of team personnel. The ACC cited current state health regulations, saying the league would take any potential changes to those guidelines under consideration.