The Latest: NHL's Flames have positive test, plan to play on 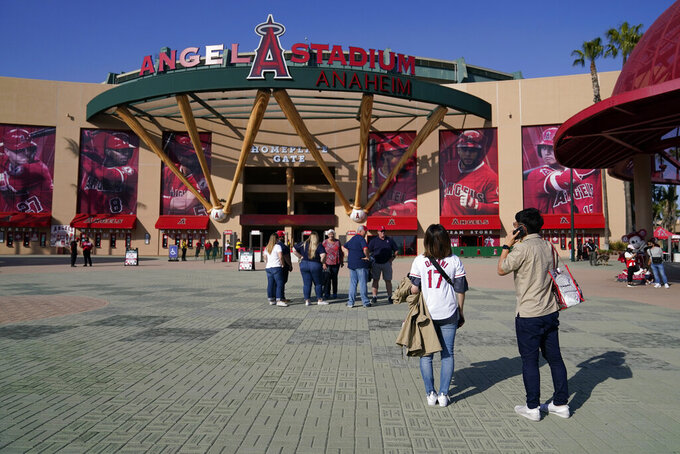 Fans stand outside Angel Stadium when a baseball game between the Minnesota Twins and the Los Angeles Angels was postponed Saturday, April 17, 2021, in Anaheim, Calif. MLB said the game was postponed to allow for continued COVID-19 testing and contact tracing involving members of the Twins organization. (AP Photo/Ashley Landis)

The Calgary Flames have had one player test positive for COVID-19 and called off their morning skate due to the test.

The club said in a statement the player was in isolation and other players and staff members had tested negative for the coronavirus.

Montreal was prepared to play at Calgary on Friday night despite the positive test, and the Canadiens are familiar with schedule disruptions caused by the pandemic. Four of their games in March were rescheduled because one team member tested positive for a variant and another player was a close contact.

Calgary’s situation comes a few days after the Vancouver Canucks resumed play after an outbreak and long layoff. Twenty-one Vancouver players and four members of the coaching staff were affected.

COVID-19 has forced the rescheduling of 52 NHL games so far this season.

The Baltimore Orioles and the Maryland Department of Health are going to offer spectators free COVID-19 testing during the AL East team’s home games.

The Oriole Park at Camden Yards test site will be available from when the stadium’s gates open to fans until the eighth inning or 2½ hours after the game’s first pitch, whichever comes first. Testing is not required to get into the ballpark.

The team says results usually will be available within 24 to 48 hours via text, email or a phone call.

The NCAA will allow up to 50% capacity at venues for 2021 outdoor spring championships and Division I fall championships being held this spring.

The new policy was based on recommendations from the NCAA COVID-19 medical advisory group.

The policy will begin Wednesday with the Division I men’s and women’s soccer tournaments and May 1 with the FCS quarterfinal games.

Exact capacity percentages will vary by site, depending on state and local health mandates. Winter championship COVID-19 testing protocols will remain in place through the remaining championships.

Three players and five staff members were positive for COVID-19 in the past week among 12,458 monitoring tests announced by Major League Baseball and the players’ association.

The eight amounted to a 0.06% positive rate, the commissioner’s office said Friday.