The Latest: Nishikori beaten by Travaglia in 5 sets 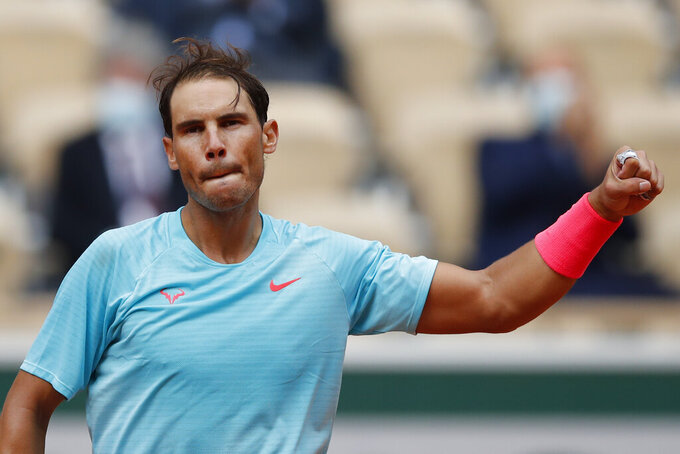 Kei Nishikori’s first Grand Slam tournament since having right elbow surgery and contracting the coronavirus is over.

Nishikori, who was once ranked No. 4 but is now down to No. 35, missed the U.S. Open after testing positive for COVID-19.

The 74th-ranked Travaglia is one of an modern-era record of six Italian men who reached the second round at Roland Garros.

Kiki Bertens left the court in a wheelchair following a drama-filled 7-6 (5), 3-6, 9-7 win over 2012 finalist Sara Errani in the second round of the French Open.

Apparently struggling with cramps, the fifth-seeded Bertens was treated by a trainer both during and after the 3 hour, 11 minute match.

Bertens saved a match point with a forehand cross-court winner when Errani served for the match at 6-5 in the third.

Struggling with her ball toss, Errani often resorted to underhand serves. She had 14 double-faults.

Nadal improved his record at Roland Garros to 95-2 when he sealed victory on his first match point.

He next faces either Kei Nishikori of Japan or Stefano Travaglia of Italy.

After eliminating Andreas Seppi in his opening main draw match, the 20-year-old American qualifier took out 21st-seeded John Isner in the second round with a 6-4, 6-4, 2-6, 6-4 win.

A former junior world No. 1 and winner of the boys title at the 2018 Australian Open — and the son of 1992 French Open finalist Petr Korda — Korda broke Isner’s normally dominant serve five times.

The No. 213-ranked Korda will next face either Mikhail Kukushkin or qualifier Pedro Martinez on Friday.

Also, No. 27-seeded American Taylor Fritz reached the third round by serving 16 aces in a straight-set victory over Radu Albot.

U.S. Open runner-up Victoria Azarenka is out of the French Open in the second round.

Azarenka’s exit means all four women who reached the semifinals in New York earlier this month already are gone in Paris. Serena Williams withdrew from the French Open because of an injured Achilles tendon, Jennifer Brady lost in the first round at Roland Garros and U.S. Open champion Naomi Osaka did not make the trip to France.

Schmiedlova had lost 13 consecutive Grand Slam matches in a streak dating to 2015 until beating Venus Williams in the first round this week.

Azarenka is a former No. 1 and a two-time champion at the Australian Open.

Elina Svitolina could not hold back the tears when remembering her favorite mascot.

The third-seeded Ukrainian player was speaking in her post-match news conference after beating Renata Zarazua 6-3, 0-6, 6-2 to reach the third round.

She was asked at the end of the session how important the mascot called Bobik had been in her life, and whether she still had it.

Svitolina soon wiped away her tears.

Svitolina became even more tearful and took a few moments to compose herself.

Dominik Koepfer was about to serve in his match against Stan Wawrinka on Court Suzanne Lenglen when he was startled by a sonic boom.

Koepfer's shoulders dropped into a defensive position and he stopped his service motion.

People all around Paris were were rattled when that loud bang arrived because no one immediately could be sure what caused it.

Police officers outside the tournament grounds were told to cordon off an area nearby.

Police soon wrote on Twitter that it wasn’t an explosion. They said it was "a fighter plane which has broken the sound barrier.”

Serena Williams is out of the French Open.

The American pulled out of the tournament before her second-round match against Tsvetana Pironkova because of an Achilles injury.

Williams hurt her left leg during a semifinal loss at the U.S. Open three weeks ago.

This is her earliest exit at any Grand Slam tournament since a second-round loss at Roland Garros in 2014.

She also withdrew from the French Open two years ago because of an injury before she was supposed to play Maria Sharapova in the fourth round.