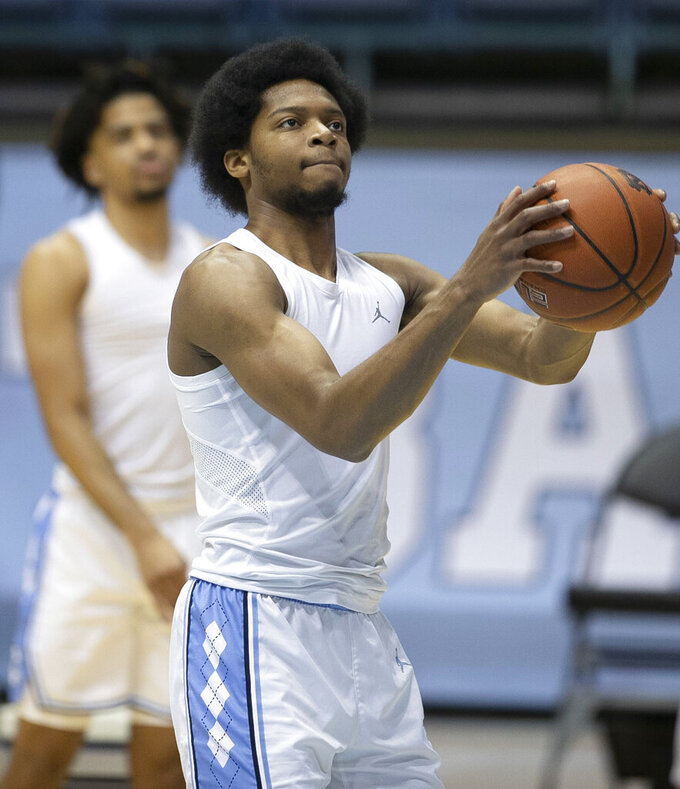 North Carolina's Kerwin Walton (24) works on his shooting form prior to the Tar Heels' game against Marquette on Wednesday, February 24, 2021 at the Smith Center in Chapel Hill, N.C. (Robert Willett/The News & Observer via AP)

The NIT is moving the entire 2021 event to Texas because of the coronavirus pandemic, taking the semifinals and championship game out of New York’s Madison Square Garden for the first time in the 83-year history of college basketball’s oldest postseason tournament.

The field is being reduced to 16 teams from the usual 32, and all games will be played in the Dallas area. The two venues are the University of North Texas in Denton and an arena in Frisco that is home to a G League team affiliated with the Dallas Mavericks.

First-round games will be played March 17-20, with the quarterfinals March 25. The semifinals are set for March 27, followed by the championship game the next day. Specific arenas for each round weren’t announced.

The NIT field will be announced after the NCAA Tournament is set March 14. The Texas Longhorns won the most recent NIT in 2019.

The NHL closed February with a season-low-matching four players on its COVID-19 list.

Detroit’s Patrik Nemeth entered the protocol on Sunday, while Ottawa’s Ryan Dzingel and Philadelphia’s Travis Konecny were cleared after spending two weeks on the list.

Konecny was the final Flyers player in the protocol after the team had as many as seven on the list on Feb. 17.

The overall NHL numbers have stayed in single digits since Feb. 22, when there were nine players in the protocol. Overall, that’s down from a season-high 59 players on the list Feb. 12.

Nemeth’s addition ups the total to 129 players having spent at least one day in the protocol. The New Jersey Devils top that list with 21 players affected and spending a combined 259 days on the COVID-19 list.

Montreal and Calgary are the only NHL teams that have not had a player placed in protocol since the season began on Jan. 13.

The men’s basketball game between Washington State and Arizona State scheduled for Monday will not be played due to COVID-19 issues in the Cougars’ program.

Arizona State won 77-74 in overtime when the teams played on Saturday, but a Washington State player tested positive for COVID-19 Monday morning.

The game had been rescheduled from earlier in the season due to coronavirus issues at Arizona State.

The Sun Devils close out the regular season against Colorado and Utah this week.

The Football Championship Subdivision game between East Tennessee and Wofford on Saturday has been postponed.

The game was supposed to be played at Wofford, but the Terriers have dropped below the guidelines for available players at a specific position group due to COVID-19 player opt-outs and injuries.

The teams play in the Southern Conference. There was no immediate word of when the game might be rescheduled.

East Tennessee will host Furman on March 13, while Wofford will head to Samford that same day.