The Latest: Ontario getting military help for pandemic surge 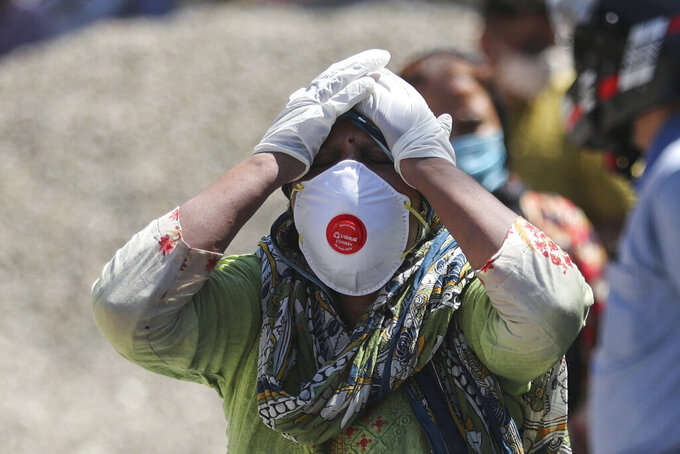 A relative of a person who died of COVID-19 reacts at a crematorium in Jammu, India, Sunday, April.25, 2021. (AP Photo/Channi Anand)

TORONTO — The government of Ontario will be getting help from Canada’s military in dealing with a surge of coronavirus infections, while several other Canadian provinces are tightening health restrictions in hopes of avoiding a similar situation.

Ontario has been struggling with a new wave of the pandemic that has seen the number of COVD-19 patients in intensive care surge. Ontario’s Ministry of Health reported 2,271 people were in hospitals with COVID-19 on Monday, including 877 in ICUs.

Several other provinces imposed new restrictions Monday, including Nova Scotia, which closed Halifax-area schools to in-person learning for two weeks after the province revored a single-day record for new cases for the second day in a row.

— The U.S. says it will share its pipeline of AstraZeneca vaccines with the world

— Continental Europe could allow US tourists back this summer

SAN FRANCISCO -- Officials at the University of California, San Francisco say a man in his 30s is recuperating after developing a rare blood clot in his leg within two weeks of receiving the Johnson & Johnson coronavirus vaccine.

As of Friday, the U.S. Centers for Disease Control and Prevention had reported the rare clots in 15 people, all women, after 8 million doses of the vaccine were administered nationally.

Federal officials lifted an 11-day pause on use of the single-shot vaccine Friday, saying the benefits outweighed the risks.

The university said Monday that “to the best of our knowledge, this is the first male patient with VITT syndrome in the U.S.” It says the man was admitted 13 days after receiving the vaccination and should be released shortly.

CAMBRDIGE, Mass. — The French pharmaceutical company Sanofi will help manufacture the Moderna coronavirus vaccine beginning in September, joining other companies assisting with production of one of the three vaccines now approved in the U.S.

Under the agreement announced Monday, Sanofi will handle final manufacturing steps, including filling, inspecting and labeling vaccine vials and packaging them. The deal involves up to 200 million doses of Moderna’s two-shot vaccine.

Sanofi will do the work at its existing manufacturing plant in Ridgefield, New Jersey.

Moderna earlier this month said it was expanding its partnership with contract manufacturer Catalent by dedicating a new high-speed production line at its Bloomington, Indiana, factory for filling vials with the Moderna vaccine.

In April, Moderna struck an agreement with Baxter International to provide “fill and finish” services and packaging for about 60 million to 90 million doses.

The lockdown is set to begin Thursday and last until May 17.

President Recep Tayyip Erdogan said Monday all businesses will have to close unless otherwise stated by the interior minister. Supermarkets can stay open, except on Sundays. Permission will be needed for intercity travel. All schools will switch to online learning.

Erdogan said without stricter restrictions and curbing infection rates, there would be a “heavy price” for tourism, trade and education. He said the aim is to lower daily infections to 5,000. Confirmed infections Sunday stood at 38,553.

Turkey had so far instituted partial lockdowns. After the country lifted partial restrictions in March, infections and deaths soared.

Turkey has recorded more than 38,000 deaths and 4.6 million infections since the start of the pandemic.

GENEVA — The head of the World Health Organization is calling India’s surge in coronavirus cases “beyond heartbreaking” and says the U.N. agency has dispatched critical supplies to the subcontinent, including thousands of portable oxygen machines that help patients breathe.

WHO director-general Tedros Adhanom Ghebreyesus said the agency has redeployed more than 2,000 staff to support India’s response. Among the supplies the agency has sent are pre-made mobile field hospitals and lab supplies, he said.

Maria Van Kerkhove, WHO’s technical lead on COVID-19, said the reported cases and deaths in India were “certainly an underestimate of the true number of cases.”

At a press briefing on Monday, Tedros said the pandemic “continues to intensify” globally and that coronavirus infections have now risen for the ninth straight week, while deaths have increased for the sixth week in a row.

“There were as many cases globally last week as in the first five months of the pandemic,” he said.

WASHINGTON — The U.S. says it is providing a range of emergency assistance to India to help the country contain its surging coronavirus infections.

The White House says the help includes vaccine materials, therapeutics and devices that help provide oxygen. India set another record Monday for new coronavirus infections for a fifth day in a row with more than 350,000 cases.

President Joe Biden spoke Monday with Indian Prime Minister Narendra Modi and committed that the U.S. and India will work together to fight COVID-19. The White House says Modi expressed appreciation for the cooperation between both countries.

In a tweet Sunday, Biden said, “Just as India sent assistance to the United States as our hospitals were strained early in the pandemic, we are determined to help India in its time of need.”

MADRID — Spain’s famed bull-running festival in Pamplona is being canceled for the second year in a row because of the pandemic.

Pamplona Mayor Enrique Maya cited a prevalence of coronavirus outbreaks, a high occupancy rate in hospitals and a slow rollout of vaccines for the decision.

“The festival cannot be organized overnight,” Maya said Monday during a news conference. “This is very hard. I never thought that this could happen.”

The nine-day festival in July — popularized by Ernest Hemingway’s 1926 novel “The Sun Also Rises” — is Spain’s most international event. Before last year’s cancellation, it was last called off during the Spanish Civil War in the 1930s.

The troops were summoned at the government’s request after civilian authorities failed to implement the rules. Government officials say a nationwide lockdown will be necessary if the COVID-19 situation does not improve this week.

Pakistan is in its third wave of coronavirus infections, said Army spokesman Maj. Gen. Babar Iftikhar at a news conference.

Iftikhar’s comments came hours after Pakistan reported 70 deaths from COVID-19 and 4,825 cases over the past 24 hours.

Police have arrested 177 people in the past 24 hours for violating the regulations, police spokesman Ajith Rohana said Monday.

Health officials have warned that a more contagious variant has been detected in Sri Lanka. For several weeks, the number of confirmed new cases had been less than 300 daily. On Monday, the figure rose to 793.

Sri Lanka has recorded a total of more than 100,000 cases, including 642 fatalities.

TOKYO — Japan will step up border controls at airports after health authorities found 21 cases of a coronavirus variant experts say could be more contagious.

Chief Cabinet Secretary Katsunobu Kato said Monday all but one of the 21 variant cases were detected in people arriving at Japanese airports.

The variant has been circulating in India, and experts fear it could worsen Japan’s ongoing surge.

On Sunday, Japan also began emergency measures in Tokyo, Osaka and two of its neighboring prefectures that include closing bars, department stores and other businesses and requiring staying home until May 11.

It's the third state of emergency in Japan in three months, and is raising questions about whether the country can safely host the Olympics this summer.

BANGKOK — Cinemas, parks and gyms were among the closed venues in Bangkok on Monday as Thailand struggles with its worst surge in coronavirus cases during the pandemic.

The restrictions come amid a shortage of hospital beds, along with a failure to secure adequate COVID-19 vaccine supplies, but did not include nationwide lockdowns, curfews or travel bans. Health care workers say stronger measures are needed to relieve overburdened hospitals.

The Thai capital has seen a rapid rise in infections since early April. On Monday, health authorities announced 2,048 new cases and eight deaths, bringing the totals to more than 57,000 cases and 148 deaths.

The latest measure to curb infections is a fine of up to 20,000 baht ($636) for failing to wearing face masks in indoor and outdoor areas in 48 provinces including Bangkok.

Thailand also has banned the entry of visitors from India, with the exception of its own citizens. The ban takes effect May 1.

PRAGUE — The Czech Republic is easing its tight coronavirus restrictions amid a decline in new infections in one of the hardest-hit European Union countries.

The government says hairdressers, beauty salons and pet care providers will be among those allowed to reopen starting May 3.

If new infections continue to decrease, the government is set to reopen all stores at the same time, with the final decision expected on Thursday.

The number of new cases per 100,000 citizens in last seven days was at 163 on Sunday. The easing is set to go ahead if that number drops to 100. That would also makes it possible for the elementary schools to fully reopen.

In neighboring Slovakia, the restaurants are reopening on Monday for outdoor dining together with fitness centers after a decrease in new cases.

HONG KONG — Hong Kong and Singapore said Monday tourists will soon be able to fly between the cities without quarantining.

The move comes as both cities are seeking to boost tourism amid the pandemic, which prompted many countries to restrict travelers from abroad.

Flights will begin from May 26. Visitors will not have to go through the quarantine as long as they fulfill other conditions of travelling within the air travel bubble.

The cities had announced the launch of the arrangement last November, but shelved the plan after Hong Kong saw a surge in COVID-19 infections.

ROME — Much of Italy is reopening after weeks of strict coronavirus lockdowns, with museums welcoming art lovers and bars and restaurants opening for outdoor dining.

Public transport in Rome and Milan was jammed, despite appeals for social distancing, as high schools began operating at least 70% in-person on Monday.

Restaurant workers who have been home for weeks got an early start setting up tables and sweeping cobblestones to welcome customers.

At Rome’s Capitoline Museums, visitors had the place to themselves, without the tourists who usually overwhelm the museum and its picturesque piazza overlooking the Roman Forum.

Art student Giorgio Salemme said the reduced crowds were good for museum visitors: “We are avoiding the usual over-crowding where you see that everyone is trying to devour everything as quickly as possible without appreciating it.”

WARSAW, Poland — No-shows for COVID-19 vaccinations in Poland have been limited and are not affecting the country's vaccination push, according to a Polish official.

A bigger problem is the delays in vaccine shipments, Dworczyk said. Around 1.1 million of the doses expected this week from vaccine producers will be delayed, likely until May, he said.

Poland, which has a population of around 38 million, has so far administered more than 10.3 million doses of the Pfizer-BioNTech, Moderna, AstraZeneca and Johnson & Johnson vaccines. Nearly 2.6 million people have been fully vaccinated.