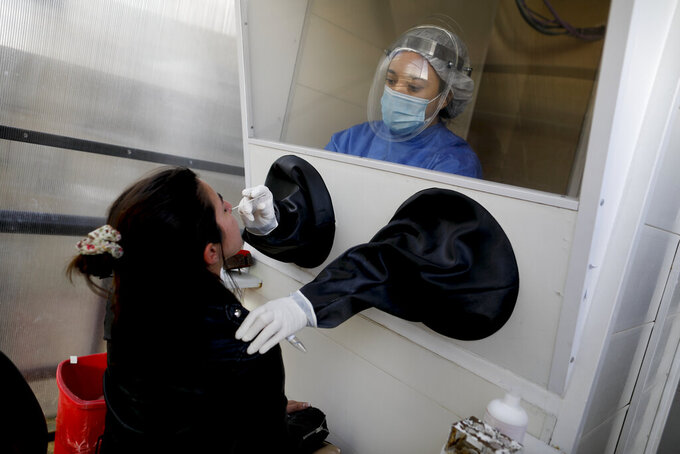 Starting Friday in those three areas, only 10 people will be allowed to gather indoors — down from the current limit of 25. The number for outdoor gatherings will drop to 25 from 100.

Ford says the new limits will not apply for restaurants, movie theaters or weddings held at banquet halls, where he says public health guidelines are being followed.

— The U.S. House has voted to condemn racism against Asian Americans tied to the coronavirus outbreak.

— Twisted Sister singer Dee Snider took to social media to condemn anti-maskers who ripped off their masks inside a Florida store while blaring the group’s hit “We’re Not Gonna Take It.”

ATLANTA — Georgia has surpassed 300,000 confirmed coronavirus infections amid indications a decline in new cases may be leveling out.

Authorities say Georgia’s numbers remain mostly headed in the right direction, although the seven-day rolling average of new cases has drifted up for several days. Georgia ranks 12th among U.S. states in most new cases per capita in the past 14 days, according to data kept by The Associated Press.

Epidemiologist Amber Schmidtke says infections “seem to have hit a leveling point” in the recent downward trend, adding that “we need more time to know.”

OKLAHOMA CITY — Oklahoma Gov. Kevin Stitt has reiterated that he will not issue a statewide mask mandate despite a recommendation from the White House Coronavirus Task Force.

The governor noted Thursday that he has argued all along that an order requiring the use of face masks is unenforceable and adds: “I’m not going to mandate something that I don’t think you can enforce.”

Stitt says he supports individual cities in the state that have issued mask-wearing mandates, which include Oklahoma City, Tulsa and Norman. The governor also encourages people to wear masks.

The Oklahoma State Department of Health on Thursday reported 73,318 total confirmed virus cases and 930 deaths due to COVID-19. That was an increase of 1,034 cases and six more deaths for the previous 24 hours.

LAS VEGAS — A Las Vegas Strip resort says it has counted 548 positive tests for the coronavirus among its 12,000 employees since May.

Wynn Resorts said Thursday that screenings found 51 positive cases among returning workers before its Wynn Las Vegas and Encore resorts reopened June 4 and 497 infections since then.

Company CEO Matt Maddox says contact tracing determined 98% of the employees who contracted the virus got it outside work.

The company says six guests have tested positive among more than 500,000 who have stayed at the hotels since they reopened.

The 548 positive tests among more than 15,000 employee tests amounts to a positivity test rate of 3.6%. The COVID Tracking Project on Tuesday put the seven-day rolling positivity rate for testing nationally at 5.4%.

JERUSALEM — Israeli Prime Minister Benjamin Netanyahu is warning that authorities “may have no choice” but to enact even tighter measures as the country heads into a second lockdown following a months-long rise in coronavirus cases.

In a televised address late Thursday, Netanyahu predicts that other countries will also be forced to impose new closures to contain the pandemic.

Israel’s government is imposing widespread restrictions starting Friday, with many businesses closed and people largely confined to their homes. A similar lockdown in the spring largely contained the outbreak, but the daily case numbers grew rapidly after the economy was reopened in May.

Israel has reported more than 172,000 cases since the start of the outbreak, including at least 1,163 deaths.

The governor said Thursday that he is alarmed by the increase, much of it in Utah County.

An infectious disease specialist says the surge was probably driven by high school and colleges resuming in-person learning. Dr. Eddie Stenehjem of the Intermountain Healthcare says that could lead to increased hospitalizations for older people in coming weeks.

Over the past two weeks, the rolling average number of daily new Utah coronavirus cases has increased about 54%.

KANSAS CITY — Ten football fans who attended the Kansas City Chiefs game together last week have been told to quarantine after one of them tested positive for a coronavirus infection.

Kansas City health officials said Thursday that the person tested positive a day after the group watched the game from their box in Arrowhead Stadium’s lower level.

The Chiefs say in a statement that the people involved were wearing masks when they entered the stadium as required. The team says its contact tracing system allowed it to identify those sitting with the infected person, service staff who might have had contact with the person, and others near the person when he or she entered the stadium.

The Chiefs opened the NFL season last week against the Houston Texans with only 22% capacity — about 17,000 fans — at Arrowhead. Fans were required to wear masks and social distance and other safety precautions were in place.

The Russian capital on Thursday recorded 730 new cases, an increase of about 15% from early September. Mayor Sergei Sobyanin said on state television the rise is apparently due to increased testing and the percentage of positives remains stable at about 1.5%.

He recommends “all heads of enterprises, regardless of the form of organization, if it is possible, and this is not seriously damaging to the work of the organization, continue to organize remote work.” Nationwide, Russia has recorded more than 1 million infections and 19,061 confirmed deaths.

Sánchez sent the letter on Thursday to Madrid regional leader Isabel Díaz Ayuso, who replied on Twitter that she’s happy to meet with the prime minister.

Díaz Ayuso has been one of the biggest critics of the Sánchez’s handling of the national crisis. But since the national government lifted a state of emergency that had reined in a devastating first wave of the virus in June, many regional governments such as Madrid have dealt with new outbreaks.

LONDON — The U.K. government says travelers from Singapore and Thailand won’t need to quarantine for two weeks because of a lower coronavirus infection risk.

The government says Slovenia and Guadeloupe travelers must quarantine for two weeks starting Saturday because of an increase in confirmed cases.

The weekly changes have proven controversial, causing problems for hundreds of thousands of British travelers during the summer, prompting a dash home to avoid quarantine.

The U.K. continues its sharp increase in new confirmed cases, with 3,395 reported Thursday. On Wednesday, it was 3,991 cases. The seven-day average is nearly double the level of two weeks ago.

Texas has nearly 14,500 confirmed deaths, the vast majority occurring after the state embarked on an aggressive reopening in May.

The outlook has steadily improved in the past month as hospitalizations have fallen and the infection rate has dropped into single digits.

UNITED NATIONS — The United Nations chief says there are more than 2,000 confirmed cases of coronavirus in conflict-torn Yemen.

Secretary-General Antonio Guterres says a high-level meeting on Yemen on Thursday that the estimate takes into account that “war has decimated the country’s facilities.”

He said more than five years of war has reversed development in Africa’s poorest country “by decades,” left state institutions at “the verge of collapse.”

He said despite initial expressions of support by the warring parties to his call on March 23 for a global cease-fire to deal with the pandemic, “the conflict continues unabated” and “in recent weeks, conflict has unfortunately escalated.”

Yemen’s conflict has killed more than 100,000 people. More than 3 million people were internally displaced and two-thirds of the population relies on food aid.

ANN ARBOR, Mich. — Graduate students who teach at the University of Michigan returned to classes Thursday after voting to end a nine-day strike.

The Graduate Employees’ Organization, which represents about 2,000 students who teach or assist, says it achieved “critical progress” on childcare options during the coronavirus pandemic, testing protocols and concerns about campus police operations.

The deal ends legal action taken by the university, which sued this week to try to end the strike.

“By withholding our labor, building coalitions, and making our power impossible to ignore, we forced the university to give us an offer with substantive progress toward a safe and just campus,” the union said.

ATHENS — Greece reported 135 cases of coronavirus infections among migrants and refugees on the island of Lesbos after several thousand people were tested Thursday.

Notis Mitarachi, the migration affairs minister, says the infections were discovered after some 5,000 migrants made homeless by a fire at a large refugee camp last week. They were escorted by police to a temporary new site and given rapid tests for the coronavirus.

A spike in cases nationwide has prompted the government to impose additional restrictive measures in greater Athens through Sept. 30.

MILAN — Italy counted another 1,585 people with the coronavirus on Thursday, with tests reaching 101,000.

Italy has recorded an uptick in new positives for the last six weeks, mostly from people returning from holidays. All regions reported new positives, with the most in Lombardy at nearly 300 cases.

The number of deaths remain well below peak levels, with the toll rising by 12 on Thursday to a confirmed total of 35,658.

Denmark made the move because of a flare-up of coronavirus cases, with the countries crossing the threshold of 30 cases per 100,000 inhabitants per week.

The other nations on the list against unnecessary travel are Andorra, Belgium, France, Croatia, Luxembourg, Malta, Monaco, the Netherlands, Portugal, Romania, Switzerland, Spain, the Czech Republic, Hungary and Austria.

The General Directorate for Health says 770 new infections and 10 deaths were recorded Thursday.

The deaths are the highest daily number in two months. The increases came in the week when classes resumed.

NEW YORK — New York City has delayed again the planned start of in-person learning for most of the more than 1 million students in its public school system.

Mayor Bill de Blasio announced Thursday that most elementary school students will do remote-only learning until Sept. 29. Middle and high schools will stay remote through Oct. 1. The original in-school return date was Sept. 21.

Pre-kindergarten students and some other special education students will resume in-person instruction on Monday as planned.

De Blasio and union leaders say the city needed more time to prepare for the safe return of students and staff to school buildings.