The Latest: Pac-12 to allow players’ family at tournaments 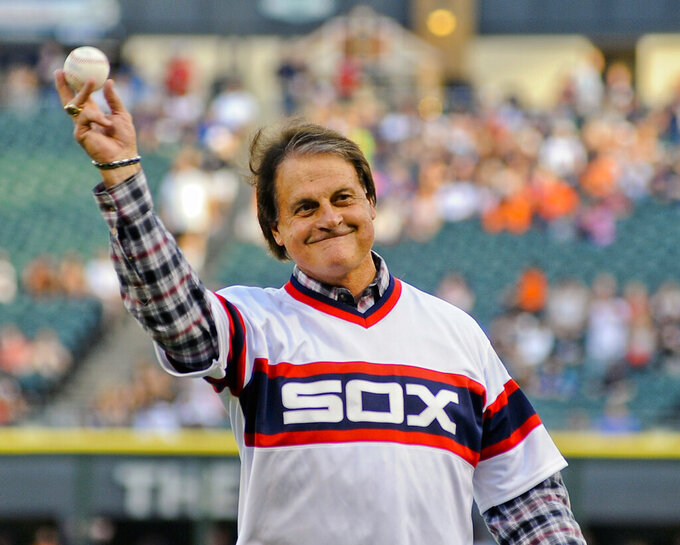 FILE - In this Aug. 30, 2014, file photo, former Chicago White Sox manager Tony La Russa throws out a ceremonial first pitch before the second baseball game of a baseball doubleheader against the Detroit Tigers in Chicago. Tony La Russa felt fortunate. The Chicago White Sox gave the Hall of Famer the opportunity to manage again despite a lengthy absence from the dugout and stuck with him after news of a drunken driving arrest broke shortly after his hiring. (AP Photo/Matt Marton, File)

The Pac-12 will allow players’ family members to attend its men’s and women’s basketball tournaments in Las Vegas next month.

The policy still must be approved by Las Vegas health authorities. No fans will be allowed to attend.

The women’s tournament is March 3-7 at Michelob Ultra Arena at Mandalay Bay.

The men’s tournament is March 10-13 at T-Mobile Arena.

Sharks forward Tomas Hertl is the San Jose player added to the NHL’s COVID-19 list in a move that led to the league postponing the team’s home game against the Vegas Golden Knights on Thursday.

Hertl became just the second Sharks’ player to make the list after Max Letunov spent the first three days of the season in the league’s COVID protocol last month.

The Philadelphia Flyers are down to having four players listed, after Justin Braun was cleared following a 15-day stint.

With the Anaheim Ducks’ test results still pending, there are currently a season-low-matching eight players on the list, down from a season-high 59 on Feb. 12.

San Jose’s game against Vegas scheduled for Thursday night has been postponed after a Sharks player entered the NHL’s COVID protocol.

It’s the 36th NHL game this season to be postponed for virus-related issues and 40th counting the Texas snowstorm that affected Dallas.

The Sharks’ facilities have been closed. The team canceled practice Wednesday but said that decision and the postponement “was made out of an abundance of caution.”

The Carolina Hurricanes are eager to allow fans to attend games after an easing of COVID-19 statewide restrictions by Gov. Roy Cooper.

Cooper’s announcement Wednesday permits larger sports venues seating more than 5,000 people to host up to 15% of capacity while following other safety guidelines. The changes go into effect Friday.

The Hurricanes say they plan to start allowing fans for the March 4 home game against Detroit. Fans will be required to wear masks and practice social distancing among the safety guidelines.

Hurricanes president and general manager Don Waddell says the team looks at this as an “opportunity to show we can” reopen at least in limited fashion with safety protocols.

Elsewhere in North Carolina, the NBA’s Charlotte Hornets said they are preparing plans for fan attendance.

At the college level, the Atlantic Coast Conference had previously announced it would offer no tickets to the public for its upcoming men’s and women’s basketball tournaments in Greensboro. The league said Wednesday it was evaluating whether there would be any change.

The NHL is down to a season-low eight players on the COVID-19 list after play on Tuesday night, five of them on the Philadelphia Flyers.

That’s a marked improvement in the 11 days since the league had a season-high 59 players on the list.

The Flyers have moved into third among NHL teams, with players spending a combined total of 98 days on the list, one more than Buffalo.

Only the Calgary Flames and Montreal Canadiens remain perfect so far this season. Neither Canadian team has had a player put on the list.

The St. Louis Blues and Toronto Maple Leafs each have had a player added to the COVID-19 list over the past few days, bringing the total number of players who have spent at least one day on it to 126.

American League MVP José Abreu has tested positive for COVID-19 and will remain away from the Chicago White Sox for at least the next few days.

General manager Rick Hahn said Wednesday in a statement the Cuban slugger is “completely asymptomatic.” Hahn said testing also showed the presence of COVID-19 antibodies and Abreu believes he had a mild case of the virus in January.

The West Coast Conference men’s and women’s basketball tournaments will be held without fans due to the COVID-19 pandemic.

Clark County in Nevada would have allowed a limited number of fans, but the conference decided it would be safer for athletes and staff with no one else in the arena.

The tournaments are March 4-9 at Orleans Arena in Las Vegas.

The WCC has played its postseason basketball in Las Vegas for 13 years, selling out every time.