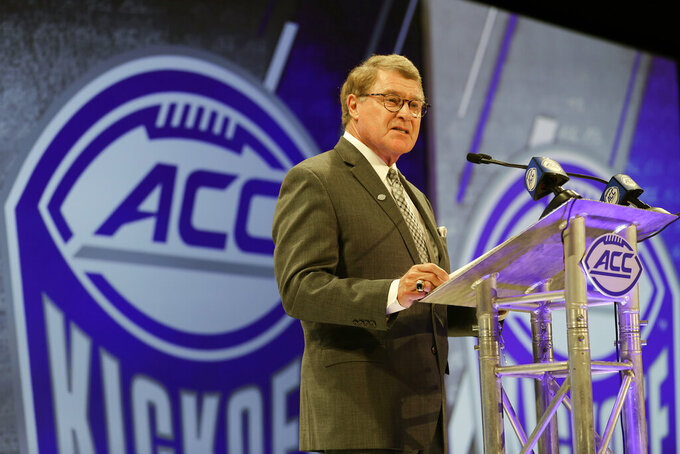 FILE - In this July 18, 2018, file photo, Atlantic Coast Conference commissioner John Swofford speaks during a news conference at the ACC NCAA college football media day in Charlotte, N.C. Atlantic Coast Conference Commissioner John Swofford is retiring after the 2020-21 academic year, ending his tenure after 24 years. Swofford, 71, has been commissioner of the ACC since 1997, the longest run in that position in the history of the 67-year-old conference. (AP Photo/Chuck Burton, File)

The 55-year-old tested positive late this week after experiencing flu-like symptoms and is self quarantining at the direction of his doctor, according to a statement by the conference.

Scott is continuing to carry on his duties as commissioner remotely.

Calgary Flames defenseman Travis Hamonic is the first player to opt out of the NHL’s return.

The team announced Hamonic’s decision Friday night several hours after the league and NHLPA agreed to resume the season. Hamonic opted out for family reasons.

Hamonic said worries about his young children contracting COVID-19 prompted his decision. His daughter was hospitalized with a respiratory illness last year.

“My family has and always will come first,” he said in a statement. “Being my little kids’ dad every day is the most important job I have.”

Hamonic, who turns 30 next month, is a pending free agent. The Flames are set to face the Winnipeg Jets in the qualifying round, starting Aug. 1 in Edmonton.

“Travis explained that due to family considerations, he has made the difficult decision not to participate,” Calgary general manager Brad Treliving said. “While we will miss Travis in our lineup, we understand and respect his decision.”

The team said after Bidwill developed symptoms, he tested positive for COVID-19 and went to the hospital after a recommendation by his doctor. His condition has improved and he’s expected to be released this weekend.

The team believes the 55-year-old Bidwill caught the virus while traveling and spending time on the East Coast for several weeks. He’s been working remotely since March and the team says he hasn’t had in-person contact coaches or players.

The White Sox believe they are poised for a turnaround after seven straight losing seasons. But losing Kopech for the season and Moncada for at least a little while are big blows.

Both players had been absent since the White Sox resumed workouts last week for the first time since Major League Baseball shut down camps in March.

The team had said Kopech was dealing with a personal issue.

“We recognize that reaching this decision is incredibly difficult for any competitive athlete, and our organization is understanding and supportive,” general manager Rick Hahn said in a statement. “We will work with Michael to assure his development continues throughout 2020, and we look forward to welcoming him back into our clubhouse for the 2021 season.”

The 24-year-old right-hander is coming back from Tommy John surgery in September 2018. He hit triple-digits on the radar gun during his first spring training appearance.

Kopech was optioned to Triple-A Charlotte on March 26 and likely would have opened the year in the minors had the season started on time.

Kopech was acquired by Chicago in the December 2016 trade that sent Chris Sale to the Boston Red Sox. He made his big league debut in 2018, going 1-1 with a 5.02 ERA in four starts.

The Copa Sudamericana, the second most prestigious club competition of the region, will resume on Oct. 27, CONMEBOL said.

South America is one of the epicenters of the COVID-19 pandemic. Brazil alone has counted more than 70,000 fatalities due to the virus.

The soccer body said teams that need to play out of their hometowns because of the pandemic will have enough time to do so. The presence of fans will depend on local authorities, according to CONMEBOL’s health protocols.

The University of Michigan says two athletes tested positive during a second round of COVID-19 testing, bringing the total to four out of the 375 who have been tested. The school says none of the 139 staff members have tested positive.

The league put out Swofford’s statement Friday afternoon, saying the league has prepared “numerous scenarios” for fall competition over the last few months. The decision would come from the league’s board of directors.

Earlier this week, the ACC delayed the start of fall competition until at least Sept. 1. That move impacts non-revenue programs like soccer, volleyball, field hockey and cross country, but not football for now. The first football game involving a league team is North Carolina State’s trip to Louisville on Sept. 2.

Virginia says two football players have tested positive for COVID-19 and will self-isolate for at least 10 days, along with other members of the program found to have come into close contact with them.

The tests were administered by UVA athletics sports medicine.

The players with positive test results will self-isolate for 10 days, or until they have been fever-free for at least three days, whichever is longer. They also will undergo cardiac screening before they are permitted to join daily sports functions.

The school did not indicate how many others were determined through contact tracing to have come into close contact with the players infected. It also did not indicate whether any coaches or other football staff have tested positive for the novel coronavirus.

All those found to have come into contact with the infected players will be asked to self-quarantine for at least 14 days and are unable to participate in daily sports functions in that time.

San Francisco Giants star catcher Buster Posey is the latest big-name player to skip this season because of concerns over the coronavirus pandemic.

Posey announced his decision on Friday. He says his family finalized the adoption of identical twin girls this week. The babies were born prematurely and Posey said after consultations with his wife and doctor he decided to opt out of the season. Posey had missed three practices while dealing with a personal issue.

Toronto will visit Boston on July 21 and 22 before heading down to Tampa Bay for its opener. The Red Sox are scheduled to open at home against the Baltimore Orioles on July 24.