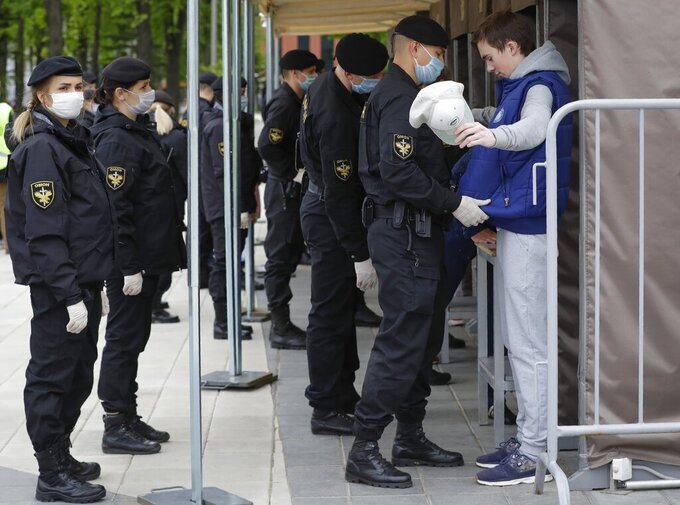 Belarus policemen wearing protective face masks check soccer fans at the entrance of the stadium prior to the Belarusian Cup final soccer match between BATE Borisov and Dynamo Brest in Minsk, Belarus, Sunday, May 24, 2020. BATE Borisov has won the Belarusian Cup with thousands of fans watching in a rare case of a soccer trophy being decided during the coronavirus pandemic. Belarus has not stopped holding public gatherings with spectators. (AP Photo/Sergei Grits)

Formula One driver George Russell won the virtual Monaco Grand Prix race by a large margin on the day the iconic race would have been held.

The 22-year-old British driver, who races for the Williams team in F1, finished 39 seconds ahead of former F1 driver Esteban Gutiérrez of Mexico.

Charles Leclerc, who is from Monaco and lives near the actual race track’s start line, finished in third place. He was 15 seconds behind Gutiérrez.

F1 has been holding virtual races because the real series has not started this year due to the coronavirus pandemic. The first 10 races have been either postponed or canceled outright. Monaco was canceled for the first time in 66 years.

BATE Borisov has won the Belarusian Cup with thousands of fans watching in a rare case of a soccer trophy being decided during the coronavirus pandemic.

The Belarus soccer federation said that 5,761 tickets were sold for the game.

That was only a fraction of the stadium’s capacity so that fans would be spaced around the arena. However, many supporters ignored the seating arrangements to sit in groups and most did not wear masks.

BATE beat Dynamo Brest 1-0 with a goal from defender Zakhar Volkov from a corner right at the end of extra time.

It was the fourth occasion that BATE has won the cup. Some fan groups had earlier called on their members not to attend games during the coronavirus pandemic. Belarus has not stopped holding public gatherings with spectators.

New York Gov. Andrew Cuomo says teams in his state can return to their facilities for training after a pause of more than two months.

“Starting today, all the New York professional sports leagues will be able to begin training camps,” the Democratic governor said during a news conference Sunday.

The New York City area was one of the hardest-hit parts of the U.S. by the coronavirus pandemic, but COVID-19 deaths and new infections in the state have been trending downward.

Major League Baseball, the NBA and the NHL are discussing the resumption of their seasons with their players’ unions.

“I believe that sports that can come back without having people in the stadium, without having people in the arena — do it! Do it!” Cuomo said. “Work out the economics, if you can. We want you up. We want people to be able to watch sports. To the extent people are still staying home, it gives people something to do. It’s a return to normalcy. So we are working and encouraging all sports teams to start their training camps as soon as possible. And we’ll work with them to make sure that can happen.”

Hull has announced it is the League Championship club with two personnel who have tested positive for COVID-19.

A total of 1,014 players and staff from all 24 clubs in England's second tier were tested for the coronavirus over the last 72 hours and the results reflect an almost identical ratio of positive results to that found in the Premier League’s second wave of testing.

It had been announced that the two individuals were from the same club, without naming Hull.

“Medical confidentiality means the names will not be disclosed, and the club asks for this to be respected,” Hull said in a statement. “The duo, who are both asymptomatic and feeling no ill effects, will now self-isolate for seven days — in line with the protocols set out in EFL guidelines — before being tested again at a later date.”

Hull, which is immediately above the relegation zone in the second tier of English football, did not say if any of the two are current players.

A Bournemouth player is one of two positive tests for COVID-19 to emerge from the Premier League’s second round of testing, the club said on Sunday.

The team said “medical confidentiality means the player’s name will not be disclosed” and added that he will self-isolate for seven days before being tested again at a later date.

The league tested 996 players and club staff on Tuesday, Thursday, and Friday.

In the first round of tests of 748 people, there were six positives from three clubs. All are in seven days of self-isolation.

In the second round, the number of tests available to each club was increased from 40 to 50.