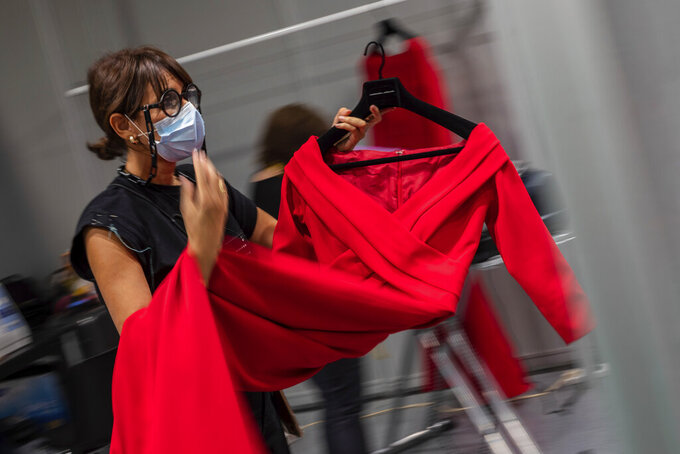 A staffer works at the backstage of Spanish designer Hannibal Laguna a day before the start of the Mercedes-Benz Fashion Week in Madrid, Spain, Wednesday, Sept. 9, 2020. The Spanish fashion will take place from 10 to 13 September under new security measures and social distance guidelines due the coronavirus pandemic. (AP Photo/Bernat Armangue) 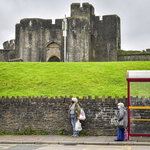 The Korea Centers for Disease Control and Prevention said Thursday it recorded 155 additional cases over the past 24 hours, taking the national tally to 21,743, with 346 deaths.

South Korea had seen a spike in new infections since early August, mostly in the greater Seoul area. Authorities in the Seoul region have subsequently ordered the shutdown of churches, nightspots and fitness centers and restricted dining at restaurants.

The elevated social distancing rules in the Seoul area are to expire Sunday, and the government is to announce whether to extend them.

— Dr. Fauci sticks with projection of coronavirus vaccine in 2021

— A new book reveals Trump seemed to understand the severity of the coronavirus threat even as he told the nation it was no worse than seasonal flu.

— The National Institutes of Health director tells Congress that AstraZeneca’s suspension of its coronavirus vaccine study shows there will be “no compromises” on safety.

— Gov. Gretchen Whitmer’s use of emergency powers during the coronavirus pandemic has reached the Michigan Supreme Court.

LOS ANGELES — Los Angeles Country health officials have walked back some Halloween rules just a day after issuing orders that would have restricted trick-or-treating and other Halloween traditions because of the coronavirus pandemic.

The county Department of Health initially said Tuesday that trick-or-treating, haunted houses and Halloween parades would be banned because those activities make it difficult to maintain social distancing.

LIBERTY, Mo. — Kansas officials say meatpacking plants and jails continue to be the main sites of active coronavirus clusters in the state.

The information was released hours after several large Kansas business groups released a letter to Gov. Laura Kelly asking her not to identify specific clusters, saying it could harm businesses as they try to recover from the pandemic.

The letter said that “we are unsure what the benefit of this disclosure offers, other than a public shaming of businesses where an outbreak occurs.

NEW ORLEANS — Louisiana’s election commissioner says she is concerned the volume of absentee mail ballots expected for the Nov. 3 election amid the coronavirus pandemic could delay tabulation of results by two to six days — even if mail balloting isn’t expanded as Gov. John Bel Edwards wants.

Sherri Wharton Hadskey made the comment Wednesday during testimony in a federal lawsuit by voting rights advocates who are challenging a proposal by Louisiana’s secretary of state to allow mail balloting by people who test positive for the virus.

The lawsuit says that plan doesn’t provide adequate safe voting procedures during the pandemic and will force people to choose between staying healthy and casting a ballot in person. Edwards also wants a more expansive plan.

Beshear says: “Compared to most states, we’ve done well, but lives are on the line, and too many have been lost. We absolutely have to do better.”

RICHMOND, Va. — Officials in Virginia say a regional jail is on lockdown after approximately 70% of its inmates recently tested positive for the coronavirus.

Pamunkey Regional Jail superintendent James Willett said Wednesday that there have been no deaths or hospitalizations as a result of the positive tests, according a report by the Richmond Times-Dispatch.

NASHVILLE, Tenn. — Tennessee reported on Wednesday that 756 students and staff have tested positive for the coronavirus at schools across the state, with more than half the districts reporting.

The Tennessee Department of Education said data on cases across all districts was supposed to be released Tuesday but was delayed because of technical difficulties.

Officials now hope to have full reporting from all districts by Sept. 22. The cases reported Wednesday include 514 students and 242 staff.

The state had initially waffled on whether it would release any data, with officials saying they were concerned about student privacy.

NASHVILLE, Tenn. — The Tennessee Department of Correction on Wednesday released the results of targeted coronavirus testing at state-run prisons.

As of mid-afternoon, the state was reporting 408 positive cases across 12 facilities with 142 tests still pending.

The targeted testing covered inmates who were determined to have come in contact with another person who tested positive and inmates who were recently outside the facility for a work assignment or medical appointment.

Privately run South Central Correctional Facility in Wayne County was reporting 1,161 cases Wednesday after testing all inmates recently. According to data compiled by The Associated Press, those cases helped propel the county to number 10 in the nation for highest per capita caseload.

The prison is one of four in Tennessee operated by CoreCivic. Results of targeted testing at the other three CoreCivic facilities was still pending on Wednesday.

COLUMBIA, S.C. — School district officials in South Carolina said Wednesday that a third grade teacher who was last in her classroom less than two weeks ago has died from COVID-19.

Richland School District 2 spokeswoman Libby Roof said in a news release that 28-year-old Demetria “Demi” Bannister was diagnosed with the virus on Friday and died Monday.

Officials say Bannister was a third grade teacher starting her fifth year of teaching at Windsor Elementary School in Columbia.

South Carolina reported just 250 new COVID-19 cases on Wednesday, the lowest since June 3. But only 1,744 virus tests were reported, as the rate of positive cases remains above the 10% level which worried health officials.

Health officials said that positive rate still concerns them because it means the virus is still spreading, especially through people who show no symptoms.

Health officials are watching the numbers closely with a combination of Labor Day weekend events and parties and going back to school.

All school systems had to start the school year by Tuesday, and most districts are allowing students to attend classes in person at least one day a week.

RICHMOND, Va. — Officials at a regional jail in Virginia announced Wednesday that the jail is on lockdown after approximately 70% of its inmates recently tested positive for COVID-19.

The Richmond Times-Dispatch reported that Pamunkey Regional Jail Superintendent James Willett said there have been no deaths or hospitalizations as a result of the positive tests.

Willett also said the “vast majority” of those who tested positive showed either mild symptoms or no symptoms.

PARIS — French health authorities said Wednesday that cases of infections from the coronavirus peaked for a second time in five days since the end of France’s lockdown in April with more than 8,500 new cases reported in 24 hours.

Increased testing could partially account for higher numbers in recent weeks, and French authorities are now making testing easier by doing away with a doctor’s prescription for a COVID-19 test in favour of an online form to fill out. But relaxed social distancing measures since summer holidays and a return to work sites by many are also seen as contributors.

Hospitals nevertheless are currently not seeing the strain for beds experienced at the height of infections with a slow but steady increase in hospitalizations, now at just over 5,000 and nearly 600 in ICUs.

Nearly 30,800 people have died in France since the start of the pandemic, among the highest rates in Europe.

All customers will have temperature checks at the door and one member of each party must provide information for contact tracing, if necessary.

Customers can’t sit at bars, but can have drinks for table service, and restaurants must close at midnight. Tables must e 6 feet apart and customers must wear masks while not at the table.

“This may not look like the indoor dining that we all know and love, but it is progress for restaurant workers and all New Yorkers,” says Mayor Bill de Blasio.

Restaurants were among the hardest-hit businesses when New York City emerged as a pandemic hotspot in March. Thousands of city restaurants have been serving food outdoors this summer, but the industry has been pushing for indoor service heading into the cooler weather of fall.

ATLANTA — The University of Georgia is reporting more than 1,400 new coronavirus cases in the past week.

The numbers, reported Thursday, push the 39,000-student university close to 2,600 total infections in the past four weeks, according to the school. The university’s outbreak is now the fastest growing among colleges in Georgia publicly reporting numbers.

The surge is in Athens-Clarke County, which hosts the university campus. Clarke County is 23rd among U.S. counties for the most new cases per capita in the past 14 days, according to figures kept by The Associated Press.

A rising positivity rate suggests things could be getting worse, with 8% of tests coming back positive last week, compared to 5% the week before.

The growing outbreak at the university comes as case numbers across Georgia continue to fall.

UNITED NATIONS — The United Nations humanitarian chief says the indirect consequences of the coronavirus pandemic are difficult for the most fragile countries.

He says the main indirect effects are economic -- weakening commodity prices, declining remittances, disruptions to trade and lock down measures making it harder for people to survive, especially day laborers and many women.

Lowcock says the coronavirus impacts health and education and people in the most fragile countries, who are vulnerable to killer diseases such as measles, malaria, tuberculosis and HIV/AIDs.

ROCHESTER HILLS, Mich. — Gyms are back open in Michigan after nearly six months.

Gov. Gretchen Whitmer’s announcement took effect on Wednesday. It allows for the reopening of fitness centers in a swath of the state that is home to 93% of Michigan’s population.

Gyms statewide face 25% capacity limits, and face coverings are required, including during exercise.

Alyssa Tushman says it was “surreal” to once again open the doors of the three Burn Fitness gyms she owns in Detroit’s suburbs.