The Latest: Sri Lanka gets 2nd vaccine donation from China 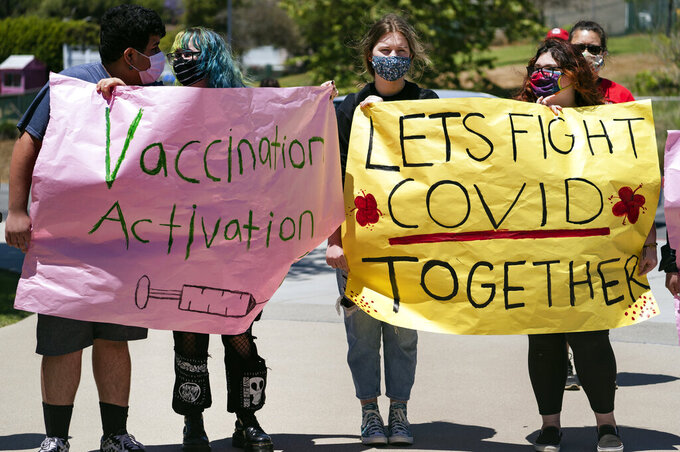 San Pedro High School students hold vaccination signs at a school-based COVID-19 vaccination event for students 12 and older in San Pedro, Calif., Monday, May 24, 2021. Schools are turning to mascots, prizes and contests to entice youth ages 12 and up to get vaccinated against the coronavirus before summer break. (AP Photo/Damian Dovarganes)

The vaccine stock that arrived early Wednesday is the second donation from China, following a shipment of 600,000 doses in March.

Sri Lanka is facing a shortage of vaccine after the producer in neighboring India failed to provide the promised Oxford-AstraZeneca vaccine stocks. The government on Tuesday agreed to buy 14 million doses of Sinopharm from China.

The current vaccination program is focused on Sri Lanka’s Western province, which includes the capital of Colombo and its suburbs. It is where the majority of the country’s coronavirus cases have been.

— Mascots, prizes rally students to get vaccinated at US schools

— Volunteers in One Good Thing keep on giving a year later

HONOLULU — Hawaii is no longer requiring people to wear face masks outdoors as the number of coronavirus cases drops and more people get vaccinated.

Gov. David Ige said Tuesday that he will maintain a requirement that people wear masks indoors, whether or not someone is vaccinated. He also says he will encourage people who are in large groups outdoors to continue to wear masks.

The governor says 57% of Hawaii’s residents have received at least one dose of coronavirus vaccine while just under half the population has been fully vaccinated.

PORTLAND, Ore. — For the first time in months, restaurants in Oregon’s most populous county — home to Portland — will open for 50% capacity for indoor dining after meeting vaccination goals.

Gov. Kate Brown announced Tuesday that half of Oregon’s counties, including Multnomah County, will move to the “lower risk” level Thursday.

This category allows a significant reduction in pandemic restrictions — allowing 50% capacity for indoor dinging, theaters, gyms and other indoor entertainment spaces. It also expands indoor gatherings to 10 people and retail store capacity to 75%.

Currently, more than half of Oregon’s eligible population who are 16 or older have received at least a first dose of coronavirus vaccine.

UNITED NATIONS — The United Nations humanitarian chief says that despite last year’s U.N. call for global cease-fires to tackle the COVID-19 pandemic, many conflicts never stopped, including in Syria, Yemen and Congo and new ones erupted.

Mark Lowcock told the U.N. Security Council on Tuesday that this has made it more difficult to control the spread of the coronavirus and care for infected people in many countries. He cites “multiple reports of atrocities” against civilians caught in conflicts during the pandemic.

Lowcock says insecurity, sanctions, counter-terrorism measures and administrative hurdles are hindering humanitarian operations. And he says the pandemic has made aid deliveries worse because of suspended flights, border closures, quarantine measures and lockdowns.

BATON ROUGE, La. — Gov. John Bel Edwards is scrapping nearly every remaining coronavirus restriction in Louisiana and lifting the statewide requirement that students must wear a mask in the classroom and at school events.

The Democratic governor announced Tuesday that he’ll keep the statewide public health emergency declaration in place. But Louisiana will have almost none of the rules governing businesses and behavior over the last 15 months of the pandemic.

Edwards cited the wide availability of the coronavirus vaccine in Louisiana.

Masks still will be required on public transit, in health care facilities and in prisons. Schools, businesses and local government officials can decide if they want to mandate masks.

WAILUKU, Hawaii — Police in Hawaii say an Oregon woman was arrested last week because she violated travel quarantine rules meant to protect the islands from the spread of coronavirus.

Maui police say 36-year-old Kelsey Newcomer didn’t have a negative COVID-19 test from an approved facility when she arrived on a flight from Seattle. Police say she also didn’t have approved lodging where she could complete at 10-day mandatory quarantine.

She was taken to a police station and later agreed to leave the island of Maui and return to Oregon. Travelers to Hawaii must comply with the state’s pre-travel testing program, even those who are fully vaccinated against COVID-19.

HARTFORD, Conn. — A judge has upheld Connecticut’s requirement that children wear masks in schools, rejecting a challenge by some parents who say mask wearing can be harmful and education officials exceeded their authority.

A Superior Court judge in Hartford released his ruling Monday in response to a lawsuit filed by the CT Freedom Alliance and several parents and their children. The decision affirms the legitimacy of mask requirements in schools this academic year but does not give guidance for the next school year.

The CT Freedom Alliance says it will appeal the ruling to the state Supreme Court, saying they can cause students distress and falsely claiming they are not useful despite assurances from the U.S. Centers for Disease Control and Prevention and other health experts that masks help prevent spread of the coronavirus.

DENVER — Colorado will have a weekly lottery for five residents to win $1 million to incentivize COVID-19 vaccinations.

Gov. Jared Polis said Tuesday that the state is setting aside $5 million of federal coronavirus relief funds that would have gone toward vaccine advertising for five residents to win $1 million each. The drawings will take place every week starting June 4 until July 7.

Every resident who has been vaccinated by the end of May will be entered in the first drawing. In order to be eligible for the drawing, residents need to be at least 18 years old and have received at least one dose of the approved coronavirus vaccines.

LITTLE ROCK, Ark. — Arkansas will be giving lottery tickets and gift certificates for hunting and fishing licenses to people who get the coronavirus vaccine.

Gov. Asa Hutchinson says $20 scratch-off lottery tickets or $20 Game and Fish gift certificates will be offered to residents who get the first dose of the vaccine starting Tuesday.

The incentives will be available starting June 1 at local health units or special events around the state.

Arkansas has had one of the lowest vaccination rates in the country and Tuesday’s announcement follows efforts in other states to offer incentives.

WASHINGTON — White House coronavirus adviser Andy Slavitt says “we need to get to the bottom” of the origins of the pandemic pathogen and the World Health Organization and China need to do more to provide definitive answers for the global community.

The precise origin of the virus remains undetermined and speculation has reigned about whether it jumped from animals to humans or whether it could have escaped from a Chinese government lab in Wuhan, the city that saw the first outbreak.

“We need a completely transparent process from China,” Slavitt said at Tuesday’s coronavirus task force briefing. Full assistance from the WHO is needed, and “we don’t have that now.”

Dr. Anthony Fauci said “many of us” feel like it was a natural occurrence, but “we don’t know 100%” and it is imperative to investigate.

“This is the first cross-border agreement we have had. This is surely going to grow a lot,” Ebrard said. “We plan to replicate this all along the border.”

The vaccines are being administered by medical personnel from the University of California, San Diego, at the San Ysidro border crossing. The program started Monday with about 150 to 200 shots administered per hour.

Mexico has had a shortage of COVID-19 vaccines, and has received only about 34.2 million doses for a population of 126 million. Since most vaccines require two doses, Mexico has only vaccinated about 15% of its population so far.

ANNAPOLIS, Md. — Maryland held its first of 40 consecutive $40,000 lottery drawings on Tuesday for people who have been vaccinated against COVID-19, one of several states using lottery prizes to encourage people to get inoculated.

The Maryland Lottery says the first winner lives in Baltimore County. There will be 39 more drawings for $40,000 in the $2 million total promotion, which ends with a $400,000 drawing prize on July 4.

The Centers for Disease Control and Prevention says 68.3% of Maryland adults have received at least one dose of a COVID-19 vaccine. Gov. Larry Hogan is hoping to reach 70% by Memorial Day.

Maryland’s statewide COVID-19 positivity rate has dropped below 2% for the first time during the pandemic. The state is reporting 160 new confirmed cases, the lowest number since March 26, 2020. Hospitalizations from the virus reached a seven-month low with 442, the lowest level since Oct. 19.

ATLANTA — Gov. Brian Kemp says public agencies in Georgia can’t require people to prove they have been vaccinated against COVID-19.

The Republican governor issued an executive order Tuesday banning vaccine passports and saying state immunization records can’t be shared with any private company aiming to create such a record.

A number of Republican-led states have moved to ban vaccine passports, even though they are not in widespread use in the U.S. Kemp’s order mostly doesn’t apply to private businesses.

The order doesn’t ban the state from including an entry for COVID-19 vaccines on the standard immunization record for children entering childcare or school. The forms don’t currently have an entry.

The University System of Georgia already announced it won’t mandate vaccines for students or staff.

SAN DIEGO — A growing number of U.S. public schools are using mascots, food trucks and prize giveaways to encourage students to get vaccinated before summer vacation.

The massive effort to create a pep-rally atmosphere comes only weeks after the Pfizer coronavirus vaccine was approved for younger adolescents ages 12 to 15. Administrators want to get as many shots in students’ arms as possible and hope it will pave the way to return to regular classes in the fall.

So far, about 14% of the nation’s 15 million kids ages 12 to 15 have received their first shot, according to the Centers for Disease Control and Prevention. Among 7.5 million teens ages 16 to 17, that number goes up to 34%, and about 22% have had both shots, according to the latest figures released Monday. The doses are scheduled about three weeks apart.

TOKYO — Tokyo officials were quick to deny a U.S. warning for Americans to avoid traveling to Japan will have an impact on Olympians.

Japan is determined to hold the postponed Tokyo Olympics, scheduled to open on July 23. The U.S. cited a surge in coronavirus cases in Japan. Most metro areas in Japan are under a state of emergency .

Those areas are expected to remain so through mid-June because rising COVID-19 cases are putting pressure on the country’s medical care systems. That causes concern about how the country could cope with the arrival of tens of thousands of Olympic participants if its hospitals remain stressed and so few of its population vaccinated.

About 2% of people in Japan have been vaccinated. No international fans are allowed at the Tokyo Olympics.

The CDC on Tuesday issued a report on these “breakthrough” cases through the end of April, when 101 million Americans were fully vaccinated. Of those, about 10,300 breakthrough infections were reported — that’s about 1 infection in every 10,000 fully vaccinated people, based on the available data.

Nearly two-thirds were women, and the median age of all cases was 58. About 25% of the infections involved people who didn’t have symptoms. About 10% were hospitalized and about 2% died.

The report is based on voluntary reporting by 46 states and territories and isn’t considered a complete tally of all breakthrough infections that may have occurred. Health officials say no vaccine is perfect and infections were expected in some vaccinated people.