The Latest: Thiem vs. Schwartzman in French quarterfinals 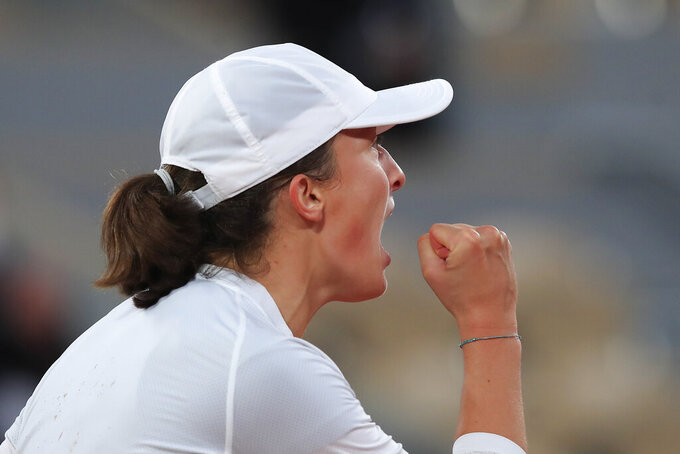 Thiem called the 3 1/2-hour contest “amazing” and praised Gaston, saying “his drop shots just are from another planet.”

Added Thiem: “If he continues like this, he’s going to be a huge, huge player and he's going to make a lot of joy in this stadium in the future."

The 20-year-old Gaston was trying to become the lowest-ranked man to reach the quarterfinals in Paris since the ATP computer rankings began in 1973.

Instead, Thiem made it to the quarterfinals at Roland Garros for the fifth time in a row.

Thiem next faces No. 12 seed Diego Schwartzman. He equaled his best Grand Slam showing by reaching his fourth major quarterfinal with a 6-1, 6-3, 6-4 win over Lorenzo Sonego.

The other quarterfinal on that half of the draw will be 12-time champion Rafael Nadal against 19-year-old Jannik Sinner.

Complaining of a slight fever and shortness of breath, Alexander Zverev wasn’t feeling himself on court at the French Open but his ailment barely caused a stir from his opponent or organizers of the Grand Slam tournament that has conducted thousands of tests to keep COVID-19 at bay.

Organizers said the sixth-seeded German player did not consult their doctors before his fourth-round match against Italian teenager Jannik Sinner, despite the symptoms he later disclosed in his news conference after he was beaten 6-3, 6-3, 4-6, 6-3.

“I shouldn’t have played,” the 23-year-old U.S. Open finalist said. “I’m completely sick. I can’t really breathe, as you can hear by my voice.”

He said he also had a fever of 38 degrees (100.4 Fahrenheit) the previous night. The symptoms came on after he beat Italian Marco Cecchinato in straight sets in round three and “I’m not in the best physical state,” he said.

Organizers said Zverev had stayed up to date with his COVID-19 tests that players have been subjected to every five days. His results were all negative, his most recent test was last Tuesday and he’d been informed Sunday that he was due for another, organizers said.

Sinner said that from his side of the net, Zverev seemed “quite okay, you know, because in the third and fourth set he was running quite a lot.”

“I think he’s honest guy, so if he says that he has cold or fever or whatever, I trust him,” he said.

The 19-year-old played down any risk of infection. Sinner plays Rafael Nadal in the quarterfinals.

“We have got tested quite many times,” he said. “Obviously, we were not that nearby, you know. It’s like we always had the distance.”

Organizers say they have conducted about 3,000 tests. They have housed players in two bio-secured Paris hotels. Players wear masks onto court but not during play and touch rackets instead of shaking hands.

Organizers removed two players from the girls’ junior tournament that started Sunday after they tested positive for the coronavirus. The girls were not named.

Roland Garros debutant Jannik Sinner ousted U.S. Open finalist Alexander Zverev from the French Open with a 6-3, 6-3, 4-6, 6-3 victory that could hardly be called an upset, so impressive has the 19-year-old Italian been on his run to the quarterfinals.

Pulling the No. 6 seed this way and that with his precision groundstrokes, the 75th-ranked Sinner is the first debutant to reach the men's quarterfinals since Rafael Nadal, who'll be his next opponent. Nadal didn't stop at the quarterfinals as a newbie in 2005: He won the first of his 12 titles on the Paris clay.

In the women's draw, another debutant also is through to the quarterfinals. Argentinian qualifier Nadia Podoroska beat Barbora Krejcikova, ranked 114th and from the Czech Republic, 2-6, 6-2, 6-3.

The 131st-ranked Podoroska, who lost in the first round at her only previous Grand Slam, the U.S. Open in 2016, will face third-seeded Elina Svitolina from Ukraine. A semifinalist last year at Wimbledon and the U.S. Open, Svitolina advanced with a 6-1, 6-3 win against French player Caroline Garcia.

While there have been upsets in the women's draw, it's business as usual for Rafael Nadal among the men at the French Open.

Against a player who loves him so much that he named his cat after him, Nadal showed no mercy with Sebastian Korda, seeing off the 20-year-old qualifier with a 6-1, 6-1, 6-2 thumping on Court Philippe Chatrier to reach the quarterfinals at Roland Garros for the 14th time.

Nadal has yet to drop a set in his pursuit of a 13th French Open crown that would give him 20 major titles overall, tying Roger Federer's record.

Korda, the son of 1998 Australian champion Petr Korda, got swept away by Nadal's power on the red clay but did get consoling words of encouragement from his 34-year-old tennis idol who said the youngster's play was “really impressive.”

“All of our generation, we try very hard to be passionate,” Nadal said. “If that's a good inspiration for the young generation, that's good.”

It's quickly becoming a day of upsets at the French Open, with Italian qualifier Martina Trevisan beating the fifth-seeded Kiki Bertens 6-4, 6-4.

Playing in her first French Open and only her second Grand Slam tournament, Trevisan's reward for ousting her Dutch opponent is a quarterfinal against Polish teenager Iga Swiatek, who downed the top-seeded Simona Halep just moments earlier.

Bertens could only watch helplessly as Trevisan sealed the victory with a backhand lob from the baseline that soared over her opponent's head. The Italian dropped her racket with delight as the ball landed in.

Ranked 159th, Trevisan fell in the first round on her Grand Slam debut, at the Australian Open this year.

Swiatek, the only teenager who reached the fourth round, avenged a crushing defeat by Halep at the same stage last year. The Romanian won that match 6-1, 6-0, in just 45 minutes.

Swiatek turned the tables this time. She never faced a break point and punished Halep with her crunching baseline shots and exquisite net play. Swiatek’s win on the Court Philippe Chatrier ended a career-best 17-match winning streak for Halep.

After losing the first set in just 26 minutes and then losing her first service game at the start of the second, Halep fought desperately to reverse the momentum.

She saved four break points in the third game and another five before being broken again in the fifth game.

Swiatek suffered none of the nerves that blunted her powerful tennis in their meeting last year.

“I felt I was playing perfectly,” she said. “Even I am surprised that I could do that.”

French Open organizers say two players have been removed from the girls' junior tournament after testing positive for the coronavirus.

The girls were not named.