The Latest: Thiem wins US Open in fifth-set tiebreaker 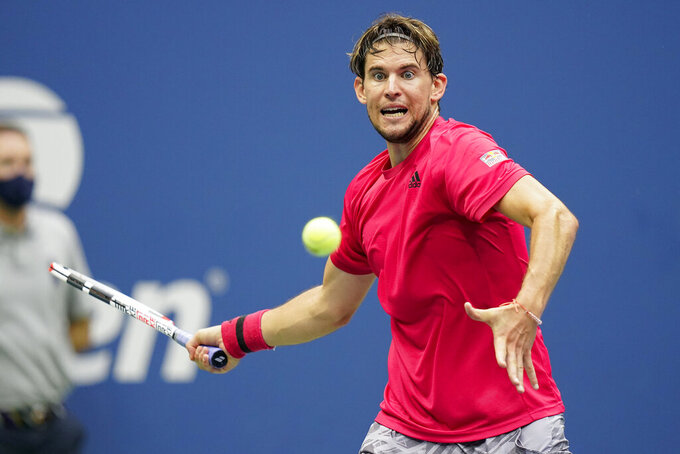 Dominic Thiem, of Austria, returns a shot to Alexander Zverev, of Germany, during the men's singles final of the US Open tennis championships, Sunday, Sept. 13, 2020, in New York. (AP Photo/Frank Franklin II)

Dominic Thiem has won his first major title by outlasting Alexander Zverev in the first U.S. Open final to be decided in a fifth-set tiebreaker.

The mental struggle to make a major breakthrough was apparent in the tense final set. Zverev broke for a 5-3 lead and served for the title, but Thiem broke right back and won the next three games, giving him a chance to serve for the match.

Zverev then broke him to force the tiebreaker, but then double-faulted twice in it.

Thiem had lost in his first three major finals.

The U.S. Open final is going to a deciding set after Dominic Thiem climbed out of a two-set hole.

Thiem won the fourth set 6-3 and is trying to complete the biggest comeback in the U.S. Open final in more than 70 years.

If Thiem wins, this would be fifth time a man came back to win the final after dropping the opening two sets in tournament history, but first since 1949, when it was known as the U.S. Championships.

Dominic Thiem has forced a fourth set against Alexander Zverev in the U.S. Open men’s final.

The No. 2 seed took the third set 6-4, keeping alive his hopes of winning his first Grand Slam title.

Thiem overcame an early break of serve in the third set by breaking right back to even the set, then won it when he broke the fifth-seeded Zverev again in the final game.

Thiem is 0-3 in Grand Slam finals.

The No. 1 seed from Japan won the final three points of the tiebreaker to pull out the match that last 2 hours, 54 minutes.

The wheelchair tournaments were played after the U.S. Tennis Association originally planned to scrap them this year in an effort to keep the number of people onsite down amid the coronavirus pandemic.

Alexander Zverev is a set away from his first Grand Slam title after dominating the first two sets of the U.S. Open final.

The No. 2-seeded Thiem predicted a close match but it's been mostly a rout. Zverev, the No. 5 seed, opened a 5-1 lead in the second set before Thiem won three straight games to make it close.

Thiem will need to pull off the same comeback that Zverev did in the semifinals, when he battled back after dropping the first two against Pablo Carreño Busta.

Alexander Zverev was dominant on his serve and took the first set of the U.S. Open 6-2 against a shaky Dominic Thiem.

Zverev won 16 of 19 points on his serve, which reached 138 mph. He also broke Thiem's serve twice.

It's only the second set lost by the No. 2-seeded Thiem in the tournament.

Thiem will have to come from a set down, just as he did when he beat Zverev in the Australian Open semifinals.

Dominic Thiem says he expects another close match between he and Alexander Zverev in the U.S. Open final, which has now begun.

The No. 2 seed says he believes it will be similar to their Australian Open semifinal that went four sets, with Thiem winning the final two in tiebreakers. He called that match “super, super close.”

It went his way, like most other matchups between them. Thiem leads the series 7-2 and has won all three in Grand Slam tournaments.

Both players are seeking their first major title.

Could the U.S. Open have set the stage for the end of line calls by human officials?

Tournament director Stacey Allaster said before the men’s final Sunday that the use of electronic line-calling instead of line judges for all courts other than the two largest stadiums went well.

“It’s been a terrific success. There’s no debate,” Allaster said.

She added: “We couldn’t be more pleased with how it has been executed.”

Allaster said no decision has been made about using the Hawk-Eye Live system in 2021 for all calls at the Grand Slam tournament she oversees.

It was during a match in Ashe that No. 1 seed Novak Djokovic angrily smacked a ball that accidentally hit a line judge in the throat after a game. Djokovic was disqualified.

As the first Grand Slam tournament amid the coronavirus pandemic drew to a close, U.S. Tennis Association CEO Mike Dowse said of the fan-less event: “It’s safe, it’s been good for tennis, and it’s been financially good for the players and the tennis ecosystem."

Marin Cilic's U.S. Open title in 2014 was the last won by somebody who hadn't previously won a major singles title.

Thiem, the No. 2 seed, is in its fourth opportunity to win one. The Austrian lost two French Open finals to Rafael Nadal and fell in this year's Australian Open final to Novak Djokovic.

The fifth-seeded Zverev is in his first Grand Slam final. He had to win a five-setter in the semifinals so he should be helped by cloudy, comfortable conditions in New York on Sunday.