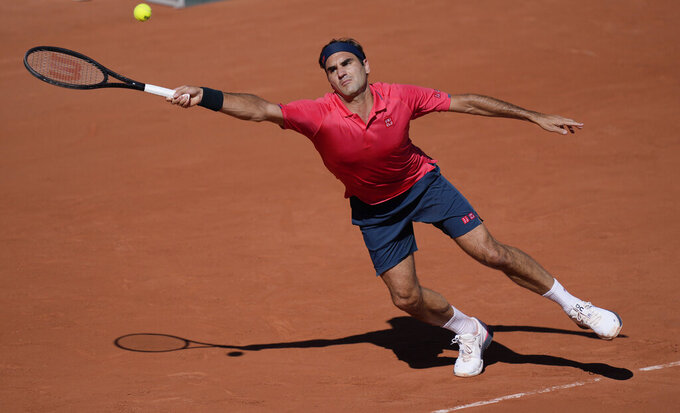 Switzerland's Roger Federer plays a return to Uzbekistan's Denis Istomin during their first round match on day two of the French Open tennis tournament at Roland Garros in Paris, France, Monday, May 31, 2021. (AP Photo/Thibault Camus) 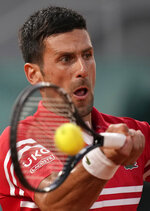 Top-ranked Ash Barty has withdrawn from the French Open.

The 2019 champion trailed 6-1, 2-2 in the second round when she signaled she was not able to keep playing against Polish opponent Magda Linette on Court Philippe Chatrier.

Barty has been dealing with a left hip problem and struggled through a 6-4, 3-6, 6-2 win over 70th-ranked Bernarda Pera in the first round.

Barty decided not to try to defend her title last year because of the coronavirus pandemic.

Barty played 13 matches on clay in the buildup to the French Open and won 11. But she was forced to retire in the quarterfinals in Rome in May because of an injury to her right arm.

Last year's runner-up Sofia Kenin advanced to the third round at Roland Garros with a 7-5, 6-3 win over Hailey Baptiste in a battle of Americans.

Kenin has had a tough start to the season. The 2020 Australian Open champion underwent an emergency appendectomy in Melbourne in February and her record was 7-8 entering the clay-court Grand Slam.

Svitolina played brilliantly in the opening set by combining deep shots from the baseline with clever play at the net and dropping only five points on her service games. She recovered from a blip early in the second set to win the last five games.

The 2019 champion was stretched to three sets in her opening match when she needed a medical timeout because of acute pain in her left hip.

Rafael Nadal celebrates his 35th birthday by facing Richard Gasquet. The 13-time champion is 16-0 against the Frenchman.