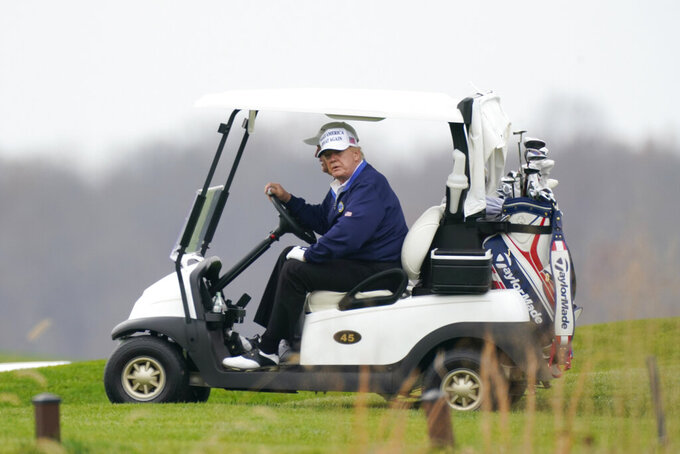 The General Services Administration has formally designated President-elect Joe Biden as the “apparent winner” of the Nov. 3 election.

The move late Monday allows Biden to coordinate with federal agencies on plans for taking over on Jan. 20. Trump, who had refused to concede the election, said in a tweet that he is directing his team to cooperate on the formal transition but is vowing to keep up the fight.

The letter to Biden from Emily Murphy, the head of GSA, came after Trump efforts to subvert the vote failed across battleground states. Michigan certified Biden’s victory Monday, and a federal judge in Pennsylvania tossed a Trump campaign lawsuit on Saturday seeking to prevent certification in that state.

Yohannes Abraham, the executive director of the Biden transition, said in a statement that the decision “is a needed step to begin tackling the challenges facing our nation, including getting the pandemic under control and our economy back on track.”

President-elect Joe Biden is building out his administration with several key picks for national security and foreign policy roles, including John Kerry. Biden is expected to nominate Antony Blinken as secretary of state.

— Trump aims to box in Biden abroad, but it may not work

More than 100 former national security officials who served in Republican administrations or GOP members of Congress say President Donald Trump’s refusal to concede the election and allow for an orderly transition is a “serious threat” to the homeland and America’s democratic process.

In a signed letter released Monday, the group urged all Republican leaders, including those on Capitol Hill, to publicly demand that Trump “cease his anti-democratic assault on the integrity of the presidential election.”

Trump has refrained from conceding and has faced roadblocks in courts as he has worked to overturn President-elect Joe Biden’s victory. Trump’s allegations of widespread conspiracy and fraud have been met with rejection as states move forward with certifying their results.

President-elect Joe Biden says he wants to work closely with the nation’s mayors to help Americans cope during the coronavirus pandemic.

Biden and Vice President-elect Kamala Harris met Monday with the U.S. conference of mayors virtually, from a theater in downtown Wilmington, Delaware. They each sat at a low table and spoke to a screen displaying a video grid of 49 mayors.

Biden told the mayors that “the quality of life falls on your shoulders” and said that working with them and getting input from local officials will be “a priority for me as president.” He added that “we’re here for you, and we’re gonna listen to you, and we’re gonna work with you,” regardless of party.

Harris told the mayors that Americans “look to you for confidence, look to you for a sense of security that everything’s going to be okay” and said that they’re “carrying an enormous burden of responsibility” during the pandemic. She added that she looked forward to being a “strong partner” like Biden was when he was vice president.

President-elect Joe Biden has selected Avril Haines, a former deputy director of the CIA, to be director of national intelligence, the first woman to hold that post.

If confirmed, Haines would be the first woman to be the nation’s top intelligence officer, charged with overseeing more than a dozen U.S. intelligence agencies.

Picking Haines is a signal that Biden intends to return the nation’s spy agencies to the hands of experienced intelligence professionals. Trump said he was a fan of the agencies, but often disparaged their work, especially their assessment about Russian interference in the 2016 election. He put the word “intelligence” in quotes on several tweets and pushed out more than a handful of individuals who made careers in intelligence in favor of partisan loyalists.

Joe Biden is filling out his administration with key picks for his national security and foreign policy teams.

Alejandro Mayorkas will be nominated as the secretary for the department of homeland security.

Biden also plans to nominate Antony Blinken as his secretary of state.

Kerry is a former secretary of state, senator from Massachusetts and Democratic presidential nominee.

Reema Dodin and Shuwanza Goff will serve as deputy directors of the White House Office of Legislative Affairs.

Dodin has been working on the transition team already, leading its legislative engagement with lawmakers on Capitol Hill. She also serves as deputy chief of staff and floor director to Illinois Sen. Dick Durbin, the Democratic whip in the Senate.

Dodin and Goff join Louisa Terrell, who was recently named the director of the White House Office of Legislative Affairs. About a dozen other senior White House staffers also have been announced by the president-elect.

The team will be tasked with turning Biden’s long list of campaign promises into legislative blueprints and ushering them through a closely divided House and Senate. The first and biggest concern is expected to be a major coronavirus aid and response package after Biden takes office in January.