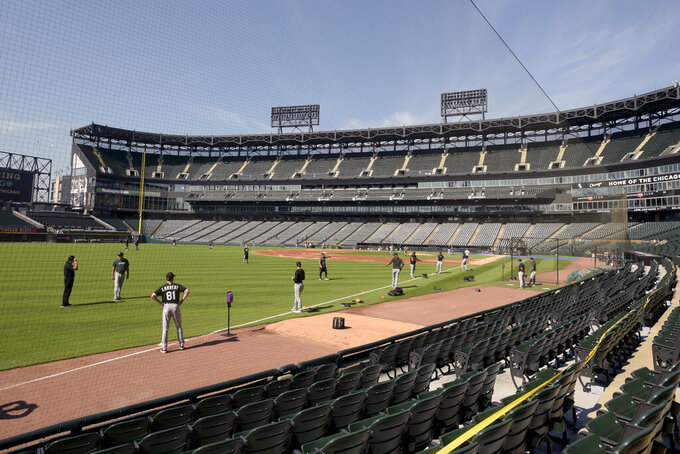 The Diamondbacks had previously revealed that three players on the 40-man roster had tested positive but Sunday was the first time any were identified.

“The two guys I mentioned are asymptomatic and feel great,” Lovullo said. “They’re in the protocol, doing what they can and taking care of what they can at home and healing up.”

The Milwaukee Bucks have closed their practice facility following the team’s Friday round of testing for the coronavirus.

Bucks officials confirmed Sunday that they had closed the facility and that they aren’t planning to reopen it before leaving for Florida on Thursday to prepare for the NBA’s resumption of the season at Walt Disney World.

The news of the closing was first reported by ESPN, which said the Bucks closed the facility after receiving results from Friday’s testing.

The Bucks owned an NBA-leading 53-12 record when play was suspended in mid-March because of the coronavirus pandemic. Their magic number for clinching the Eastern Conference’s top seed in the playoffs is two as they chase their first NBA title since 1971.

Milwaukee is scheduled to resume play July 31 against the Boston Celtics, its first of eight games to close the regular season.

Lone Star Park, a horse track about 15 miles west of downtown Dallas that has been allowing fans to attend races, canceled eight of its nine scheduled races Sunday because of coronavirus concerns.

“Due to an abundance of caution, all racing operations at Lone Star Park have been suspended due to (COVID-19),” read a statement on the track’s Twitter account. “Racing will resume at a date to be determined.”

The announcement was made about 45 minutes after the first race was completed. Racing had been scheduled to resume Monday. There was no immediate announcement on a specific restart date or if the rest of the season, scheduled to run three or four days a week through Aug. 11, will be called off.

Lone Star Park had been mandating that fans attending all must wear masks, except when eating or drinking.

Texas reported a record daily increase of 8,258 confirmed coronavirus cases Saturday and has been retreating from what had been one of the country’s swiftest reopenings. Some officials in major cities such as Austin and Houston have been asking state leaders to restore previous stay-at-home orders.

“We all know that being flexible and adjusting to the unknowns is going to be part of everything we do this season,” Forst said.

Manager Bob Melvin is eager to get everybody on the field together at the Coliseum while understanding he must be flexible during this fluid time.

'“It feels like we’re five days behind with position players,” said Melvin, who has slated the first live batting practice during a longer workout Tuesday.

Martinez says the two players took their tests Wednesday before reporting to Nationals Park and that some are still awaiting their results. Reliever Sean Doolittle minutes earlier lamented not having his COVID-19 test results back from Friday and implored baseball to “clean this up.”

Doolittle, who was part of Washington’s World Series-winning team last season, said he’s still debating whether to play this season, weighing safety concerns and physical and mental health. The 33-year-old said the Nationals still haven’t received the respirator masks they were told were coming and expressed concerns about the situation.

The Chicago White Sox say two players have tested positive for COVID-19 and are in isolation.

The team said Sunday that the two unidentified players are asymptomatic, and contact tracing for both was conducted. They are being monitored by team medical staff and will receive follow-up testing in the coming days.

They will be allowed to return to baseball activities after they test negative twice and pass other appropriate COVID-19 protocols.

The UK government says selected sports stars are to be exempt from quarantine requirements when competing in England.

However, those involved will instead live and work in “bubbled” environments behind closed doors, UK culture secretary Oliver Dowden announced on Sunday.

The new measures will allow Formula One, international soccer, golf and snooker events to take place. Competitors involved in these events will be granted quarantine exemptions.

International cricketers are also now formally exempt, although individual special arrangements have already been made for the touring West Indies and Pakistan teams this summer.

Other people essential to the staging of events such as officials, coaches, medics, mechanics and incoming members of the media will also be permitted to travel without quarantine.

In return, sporting authorities and event organizers must put in place stringent protocols to ensure that they have a minimal impact on public health during the coronavirus pandemic.